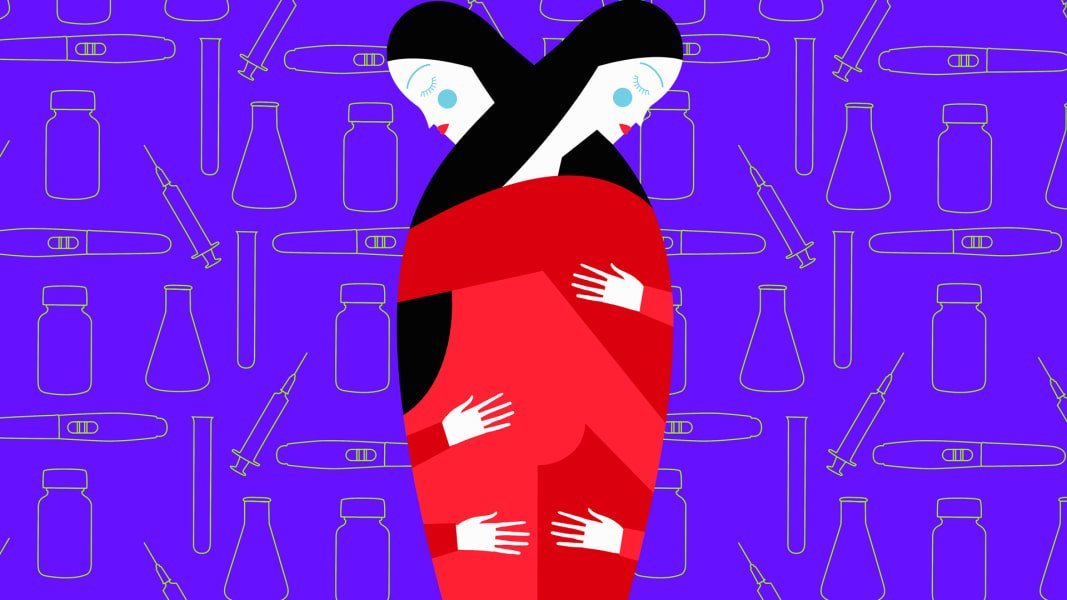 If you’re over 25, chances are you often glance at your Facebook or Instagram feed and see shot after shot of pregnancy announcements, ultrasound pics and chubby baby legs. That’s all well and good for many, but for someone who wants to have a baby and hasn’t yet been able to, every post can feel like a tiny dagger. And the last thing any real-life friend wants to do is take those online wounds and make them bigger IRL.

It’s a tricky scenario to navigate. For those of us who are already parents, most of our brain space is occupied by, you know, parent stuff. And when we meet up for a coffee with someone who is trying to have a baby, it can seem like we’re gloating — taunting them with our parenthood or alienating them deliberately — just by sharing details about our lives and our kids.

“I’ve heard over and over from my patients: ‘I want your problems. I’d be happy to be exhausted,’” Dr. Danny Shapiro, the medical director at Reproductive Biology Associates in Atlanta, tells SheKnows. So, how can you be a good friend to someone who is struggling to have a baby if you already have one?

First, don’t be afraid to actually talk to them. “I think of infertility as an invisible loss,” Vanessa Bradden, a licensed marriage and family therapist at Lakeview Therapy Group in Chicago, tells SheKnows. “We don’t ask these kinds of questions, but [someone struggling to have a baby] needs to hear them. Say things like, ‘This must be hard for you. How are you doing?’ or ‘How is your marriage doing?’” Let them take the lead from there — if you’re getting the sense that it’s not a topic they particularly want to engage in, don’t shut them out or revert to talking about your own children.

“If it was a really good friend, I would address [it] head on. Something like, ‘I want to be as sensitive as I can to your journey. What’s it like for you when I talk about my own children?’ Sasha Taskier, a marriage and family therapist in Chicago, tells SheKnows. “I think most friends would be able to answer that honestly, and you can go from there.”

If they say talking about your kids brings up a sore spot? Plan for some adults-only fun to change the subject. “An action item is really great. Something like, ‘I booked us a mani-pedi,’ or ‘I found us concert tickets,’” says Bradden. The best thing we can do for anyone in that situation is to be supportive and present.

More: I Made Friends With My Kid’s Friend’s Parents — & It Was a Mistake

If you have news to share — like, say, you’re pregnant — tell the person directly. “We shouldn’t hide our lives from people, but we can be sensitive about how we share. You don’t want them to find out from someone else,” says Bradden. (Yes, Instagram counts as “someone else.”) She offers this script: “I was really worried about sharing this. I know it’s something you really want. I hope we can keep talking about it, but I’m going to try to be mindful about how this might be impacting our friendship.”

Shapiro says if you can give them a safe space to say what they’re really thinking while also keeping a sense of humor about the situation, even better — for example, when he told a friend from medical school his wife was expecting while that friend was struggling to get pregnant, her response was, “How is your bitch wife doing?” He says, “I broke out laughing. That said it all.”

Perhaps most important, don’t offer any advice, medical or otherwise. “Don’t say, ‘Go on vacation and have a drink!’ or ‘It will happen when you stop wanting it so much!’ Those are the worst,” says Shapiro. “It’s equally bad to say, ‘It’s going to happen eventually’ — for some people, it won’t. Those kinds of things make the speaker feel better, but not the recipient.” Don’t tell them what worked for you either. Instead, Shapiro advises reassuring your friend that you know that what they are going through must be really hard — especially if they’re already receiving fertility treatments — and suggesting they get some more insights from their doctor.

More: Secondary Fertility Is Real, & It Happened to Me

Lastly, keep in mind that the invisible grief of struggling to have a child can extend to people who already have one. Bradden says we often forget that parents who want a second child have difficulties making that a reality. “Struggling to have your first is really painful,” she says. “But if you’re drunk in love with your child and think, ‘I have to have another,’ and then you can’t, people will say, ‘Well, you were pretty lucky just to have one.’ But you can’t discount their desire.”