With the 21st FIFA World Cup in Russia now in full swing, fans await a symphony of soccer set to a musical score. Football has long been established as one of the world’s most popular spectator sports, characterised by a vibrant music culture embodied in chants from the terraces, era-defining soccer anthems, pre-match and half-time entertainment, and players’ use of music as part of their pre-match routine.

In our recent study published in Sport, Exercise and Performance Psychology, we looked at how young players in the Premiership Academy youth league used music to psychologically prepare themselves for match performance. We presented a grounded theory to illuminate the science behind this phenomenon, illustrated in the diagram below.

We studied 34 academy players from a UK Premier League football club using questionnaires, reflective journals, interviews and observations. We found how players used music both to stimulate and to regulate emotion prior to a match. Music is also used to build a sense of group identity, by increasing perceptions of group cohesion and creating a positive team atmosphere.

Many players have gone on record to testify to the power of music. For example, former England and Manchester United captain Rio Ferdinand, a veteran of two World Cups, is well known for his pre-match playlist of hip-hop and grime classics. Among his favourite tracks was Tinchy Strider’s Game Over, a track that pulsates with raw, confrontational and alpha male-type energy. 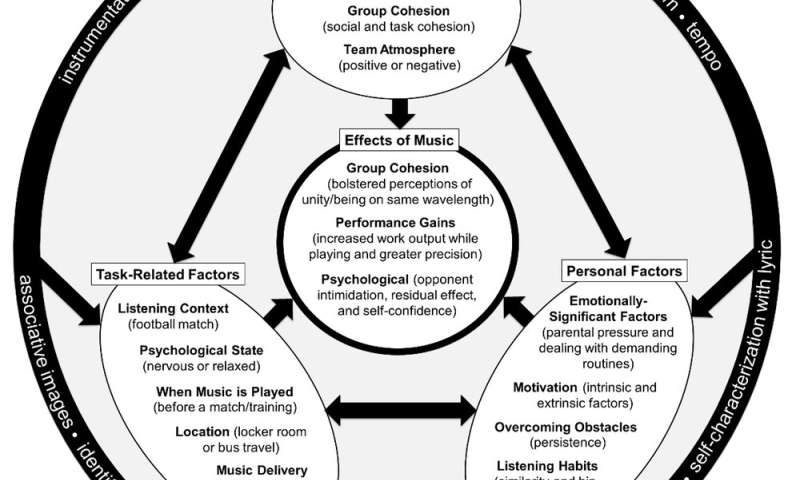 Our grounded theory model shows the way in which music is used in psychological preparation for training and on match days. The musical components (top of outer ring) and non-musical factors (bottom of outer ring) are moderated and affected by the group environment, current context and personal factors relevant at the point of listening. The interaction between these aspects alters the impact of the music in terms of its positive physical or psychological benefits.

By way of illustration, one of the players commented: “Today in the gym, I felt very fatigued and a bit aggravated, and not as though I could get through the gym session. Another player put on Post To Be by Omarion and he knows that’s my tune. As soon as the boys in the gym and I heard it, we were all buzzing and it got me motivated.”

Interestingly, we found that some players may feel that preparation without music was inadequate, suggesting that many develop a dependency on music as part of their routine. We also found that the effects of music would linger beyond its running time: this phenomenon of the residual effects of music is well documented in music psychology literature, and we will all know how persistent ear worms can be (even when we’d rather they weren’t). Often, the lyrics of the last track players hear can resonate in their minds and influence their emotional state.

Coaches, such as England’s Gareth Southgate, can make use of pre-match music with the ultimate goal of unifying the team, optimising players’ emotions and even achieving performance gains on the pitch. A team anthem can serve to unite the fans behind a team: a prime example of this was at the 1996 European Championships hosted by England, during which the home fans chanted “It’s coming home, it’s coming, football’s coming home”, from the song Three Lions, performed by popular TV comedians David Baddiel and Frank Skinner.

The lyrics alluded to the fact that England, the spiritual home of soccer, had not won a major championship since the World Cup it hosted back in 1966. Although it wasn’t to be for England on this occasion – they were knocked out by Germany in the semi-finals – the catchy refrain served to bridge the gap between a mere soccer tournament and a stage for the nation’s hopes and dreams.

One unique finding to emerge from our study was the degree to which the music preferences of senior players were readily accepted and adopted by juniors. Accordingly, if music motivates a team leader, such as England captain Harry Kane, his motivation can itself influence other members of the squad through nonverbal cues.

Familiarity is an important factor in terms of players’ liking for music. Selections that are familiar and exploit cultural and personal associations are, according to the theory, likely to yield greater psychological benefits. Our participants suggested that playlists should be varied and directed towards the needs of the majority of players on a team.

Examples of pre-match tracks selected by our participants included Lose Yourself by Eminem, Pour It Up by Rihanna, Blood On The Leaves by Kanye West, and The Catch Up by Drake. Because everyone has a different taste in music, this wouldn’t work for all players. But there are scientific ways in which coaches and managers can get a “best fit” between playlists and players’ preferences, something examined further in the book Applying Music in Exercise and Sport.

We found evidence of the effects that music has on psychological responses such as self-confidence and motivation. Some players indicated that the presence of lyrics and a fast tempo had the biggest effect. Alternatively, when other players listened to 300 Violin Orchestra by Jorge Quintero, an instrumental track at a steady 100 bpm, the music nevertheless appeared to conjure up the sort of pre-match imagery required. According to one participant: “It felt like I was getting ready to go to war, it was the violins, it was getting me prepared for something.”

So even instrumental music can provide an auditory and emotional backdrop against which a player can visualise their match performance to come as part of their psychological preparation.