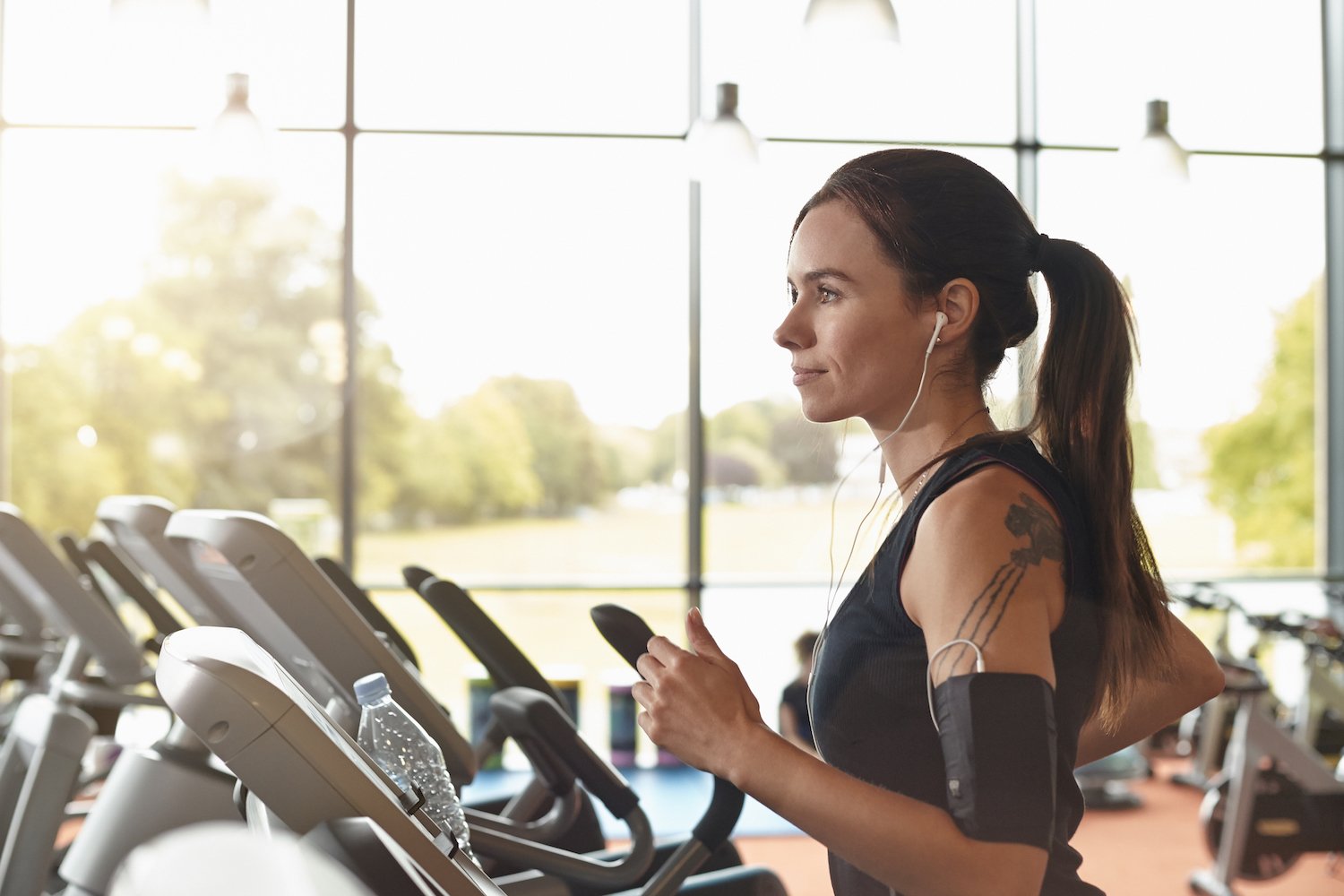 You love to run, but if you only run all the time, you can set yourself up for injury and burnout.

“Runners are notorious for having imbalances and weaknesses because running is a high-impact repetitive motion that occurs in only one plane of motion,” says personal trainer, running coach, and Shred415 instructor Kourtney Thomas. “Switching up your routine by adding group fitness classes is a great way to address the holes in your fitness and mix things up in a social, fun environment.”

With all the class options available, picking the right one could be overwhelming. So we sorted through the offerings and rounded up classes that runners will get the most benefit from.

Because it focuses on total-body strength and power moves including squats, deadlifts, and thrusters, CrossFit can be a difference-maker when it comes to optimizing your running efficiency, says California-based personal trainer Mike Donavanik, C.S.C.S. “The more power you’re able to bring to each stride, the more you’ll accomplish and the less energy you’ll need to do it,” he says. “Plus with CrossFit, you get a huge upper-body component that many runners may overlook. The stronger your upper body, the more your body can stay in control and work as a single unit—versus having your upper body flail around like so many runners’ bodies do.”

Taking their inspiration from ballet, Barre classes hone in on lower body muscular endurance as well as core stability through extremely focused strength movements with high repetitions, Donavanik says. Some classes stick to using one’s own bodyweight, but others involve the use of apparatuses including balls, weights, and bands. Either way, the ability of these classes to train your body’s smaller, stabilising muscles can reduce the risk of running injuries that are commonly because of weaknesses in the muscles that stabilise your hips and other lower-body joints, he says.

Try It: While most large gyms offer a variety of group Pilates classes, your best bet for trying out Barre include boutique studios including The Space Studio in Barangaroo.

#Tippytoetuesdays! Ballet + Yoga + Pilates = Barre Class. The combination of the three diciplines provides an all-body workout designed to focus on isometric strength whilst feeling the ?! • ? Book your next #BarreClass at the #thespacestudio through the link on our bio.

Arguably the perfect stepping-stone for runners who are new to group fitness, treadmill classes combine roughly 30 minutes of intense running intervals with another 30 minutes of strength training—all in a high-energy studio with blasting music. “It’s great motivation and definitely different than a quiet run down the path near your house,” Thomas says. “The classes encourage you to push yourself harder and introduce you to speed and tempo work.” What’s more, the strength work is aimed at improving your running: For example, mini resistance bands help runners train the small muscles of the glutes and hips, like the gluteus medius, which is key for injury prevention, she says.

Try it: Search for treadmill classes in your area or try Orange Theory Fitness in Balmain, Waterloo, Mosman or Bondi Junction.

What makes you move? What pushes you to go further? Do you need a little boost to run that extra mile? . Turn this hump day into a pump day with the help of @bodyscience supplements. . Head to our website to find the perfect product for your lifestyle and fitness goals! It doesn’t matter what you’re aiming for, we can help you to achieve it! . #bodyscience #thetrustedbrand

“I think the biggest benefit here is that cycling is low-impact,” Donavanik says. “As a runner, you’re going to be hitting the pavement or treadmill regularly, which can definitely take its toll on the joints. Getting in some cycling can enable you to take some stress off of your joints while getting a great cardiovascular workout.” Although both running and cycling are lower-body-dominant exercises, cycling emphasizes a slightly different blend of leg muscles than does running. That’s critical when it comes to reducing the muscular imbalances and preventing running injuries, says Lisa Niren, C.P.T., a Cyclestar Instructor with CYCLEBAR.

Try It: Most health clubs offer cycling classes. However, tons of cycling-only studios are popping up all over the place, each with a unique vibe for different workout personalities. Check out Scenic Cycle in Sydney or Manly.

A huge thank you to everyone who came and attended @goodwheel_hunting spin-timate charity ride on Monday. A great ride and a great cause ✌?

“I love TRX for runners,” Thomas says. “TRX by nature really challenges the core and the stability of the body, which is incredibly important in running, and again, in running efficiency. Learning how to fight instability when working with a TRX will transfer to those times when you’re out running are getting fatigued, and also to different types of running, like out on the trails when that be comes even more important.”

Try It: Check out TRX class offerings at your local gym, or look into specialised TRX studios like TRX Training Sydney.

“We runners really need to stop looking at yoga as a competing workout, or something for pure relaxation, and instead view it as a supplement to our running passion,” says runner and Yoga Six instructor Kim Kelly. “Yoga and running could not be more different, which is why they complement each other so well.” For instance, many runners suffer from tight glutes, hamstrings, and quads, she says. Yoga can help relieve tightness and improve range of motion to prevent poor running biomechanics and injury.

Try It: Try out Yoga Bar in Burwood, Bondi, Five Dock, Hurstville, Sydney CBD or Rouse Hill. Other options include Body Mind Life and Time Out.

Nothing better than a morning sesh to start off the day ?? #yogabar #yoga #barre #pilates #sydney #morningsesh

Rowing machine are no longer underused pieces of equipment collecting dust in the corner of gyms. Rowing-specific studios and classes are cropping up all over the place with big benefits for runners. “When properly performed, rowing gives a runner solid cardiovascular benefits, works the abs, core, and lower back, and even develops flexibility in the hamstrings and calves,” says Niren, who also instructs at CityRow in New York. Plus, contrary to those who think rowing is all about the back, every pull requires the lower body to produce a massive amount of power. Improving your ability develop power is critical to performing better starts, mastering short races, and enjoying a nice “kick” on the homestretch of any run, Donavanik says. Bonus: It’s low-impact, making it ideal for runners who want to give their joints a break.

Try It: CREW Boutique Rowing Studio in Sydney CBD is an option or you can search online to find offerings in your city.

“Runners can become very strong throughout anterior [front] of the body, and the muscles of the posterior chain [back] can become weak, underutilized, and tight,” says runner and Pilates instructor Jacquelyn Brennan, C.S.C.S., cofounder of Mindfuel Wellness. That’s where Pilates can help. Pilates involves focused and controlled movement—performed either on a mat or Reformer machine—to strengthen glutes, external rotators, hamstrings, as well as upper and middle back. Pilates also increases mobility and flexibility, which ultimately creates a stronger, better runner, Brennan says.

Sort of like a Pilates Reformer on steroids, the Megaformer is a piece of fitness equipment that allows athletes to improve their cardiovascular capacity as well as their muscular strength and endurance. Every session is designed to work you hard through the use of slow, controlled movements that constantly challenge your entire body, especially your core musculature—with zero rest. “The biggest benefit here would be core work for sure,” Donavanik says. “The stronger your core, the more controlled you’ll be while running.”

Try It: This is relatively new and not widespread—yet. Check out Physicore.

Monday is a state of mind⠀ … Put your positive pants on and get stuff done ✅?? #physicore #megaformer #monday #noexcuses #positive

From surfing and pole dancing to aerial yoga and Parkour, out-there fitness classes are just as much (if not more) about getting people having fun as they are about helping them get in a good sweat. And, sometimes, that’s just what runners need. “We can get so focused on our training routines and PRs that simply doing something active for the pure joy of it can be a welcome change of pace,” Thomas says. It can help you reset your running objectives and hit your next workout feeling refreshed.

This article was originally published by Women’s Health.