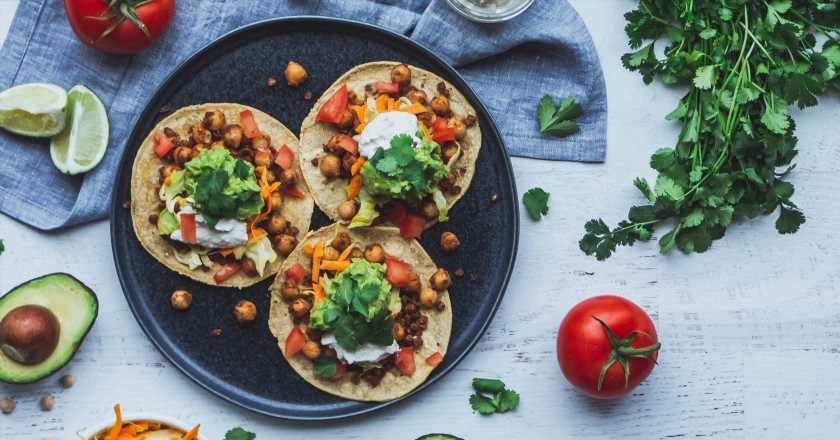 Get all the nutrients and enjoy your food while experimenting with a plant-based diet.

402,206 people took part in Veganuary in 2019, with 72% of them sticking with their diet after the 31 day challenge was up. And cutting out meat wasn’t just for the new year: a study by The Vegan Society found that one in five people in Britain reduced their meat intake during lockdown.

Giving up food you love is a big ask, but the Veganuary challenge is so popular for a reason. According to the official campaign, 37% of people signed up to the challenge to stop animals suffering, another 18% to protect the environment, and 38% went in for health reasons.

If you’re wanting to join those hundreds of thousands of people for 2021, go you. However, as with the removal of any food group from your diet, going vegan requires some thought so that you stay healthy and dedicated.

How to go vegan

First of all, go slowly. “It’s a good idea to take the transition to a vegan diet step by step prior to Veganuary,” says Heather Russell, dietitian for The Vegan Society. “This will give your gut time to adjust to the likely increase in beneficial fibre. You could try eating vegan breakfasts for a week, then add vegan lunches in the second week, and so on.”

If it’s too late for that, remember that you don’t have to go in hard for your first month, says plant-based nutritionist Amaeze Madukah. Instead, January could be the time you use to just explore vegan options, as “so many people are talking about it and sharing knowledge it makes it easier to find the information you need”.

“If somebody doesn’t want to jump straight into it that’s absolutely fine. They can go slowly and use the month to increase their plant-based meals,” Amaeze adds.

Speaking of which, it’s important that you get the prep for your new way of eating done right. “Setting aside a bit of time for nutritional planning will help you to get the most out of Veganuary and all that a vegan diet has to offer,” says Heather. “At The Vegan Society, we say that a smooth transition to a vegan diet is all about making smart swaps, replacing animal products with alternative sources of nutrition. For example, if you switch from milk and yoghurt to fortified alternatives, you won’t be missing out on calcium.”

And stocking up on all of these vegan foods is the first step, because who wants to be hungry with cupboards full of foods they can’t eat? “Beans and pulses are a simple place to start. You can replace your usual protein source in a meal with chickpeas or lentils,” says Amaeze.

“Also look at increasing your vegetable intake, because you want to make sure that you’re getting all the nutrients in. That doesn’t mean buying loads and loads of fresh produce. Frozen vegetables are just as good or sometimes even more nutritious than fresh vegetables. Don’t feel afraid to opt for frozen spinach or berries, for example, in your meals.”

While on your shopping trip, don’t be afraid to explore. Most supermarkets stock vegan meat alternatives, so if you think you’ll struggle without the flavour or texture of your favourite food then add these in to your diet. “They can be a great replacement for specific flavour or taste,” agrees Amaeze, but she says we shouldn’t eat them for every meal of the month due to their highly processed nature and, often, high salt or oil contents. “Instead of specific meat alternatives, try something like tofu or tempeh which you can marinade in the same style as meat,” she suggests.

We recommend signing up the challenge at veganuary.com so you can get recipe ideas, resources and support to make your journey easier.

There are certain nutrients you might want to pay close attention to while you get the hang of your new diet. These include but are not limited to:

B12: Vitamin B is not found in any plant sources naturally, but you can find it in fortified milks and cereals. However, the general consensus is that vegans should supplement with around 3mg a day, says Amaeze. Strong Women editor Meriam Ahari, who has been vegan for four years, loves sprinkling nutritional yeast flakes with B12 on everything from her soups to her salads.

“It tastes much better than it sounds. I equate it with adding salt or pepper to a meal. Its slightly cheesy, nutty, savoury taste adds a little more flavour to your meal. And you can buy it at Whole Foods or Holland and Barrett.”

Protein: Despite what you may have heard, “vegans generally do not have a protein deficiency,” says Amaeze. However, it’s still important to get good protein sources in your diet. Top up on nuts, seeds, grains, beans and legumes with every meal.

Omega-3: While omegas are associated with fish, you can get enough in from a vegan diet with conscious and careful planning. Walnuts and flaxseeds are great sources of omega-3s to get in your diet.

Vitamin D: “This isn’t just a vegan problem, but most people in the UK lack vitamin D,” says Amaeze. Supplementation is advised for all, particularly in the winter months, by the NHS.

Selenium: Another essential mineral that is usually found in fish and eggs, selenium can still be found in decent amounts on a vegan diet. In fact, “two Brazil nuts a day are enough to meet your daily need for selenium,” says Amaeze.

Iron: Iron is found in lentils, chickpeas and green leafy vegetables, but “make sure that you’re eating them with a source of vitamin C, because that helps with the iron absorption,” says Amaeze.

If you are worried about any deficiencies, speak with your GP, a registered nutritionist or dietician who can help you.

How to stick with veganism

If you are struggling through your vegan journey, it’s totally OK to step back and reevaluate your diet, particularly if you are feeling any negative health implications such as fatigue, low mood or food obsession. But if it’s just the thought of a juicy burger that’s making you weak at the knees, here’s how to stay on track.

Eat more than potato: It may be a stereotype that all vegans eat is chips, but often it feels easiest to just eat a plate of vegetables. But you can’t simply eat the same things you always have but with the meat taken out and expect to feel equally as full and satisfied. Make sure your plate has a mix of all the macronutrients (protein, such as tofu; fat, such as avocado; and carbs, such as quinoa) and you’re hitting your vitamin and mineral intake. Not only will it help your plate taste better, but you’ll feel better for it too.

Remember your why: “Understand why you actually want to go vegan,” says Amaeze. “If it’s simply because you want a challenge, that’s fine. But going back to your reason will help you stick with it,” she says.