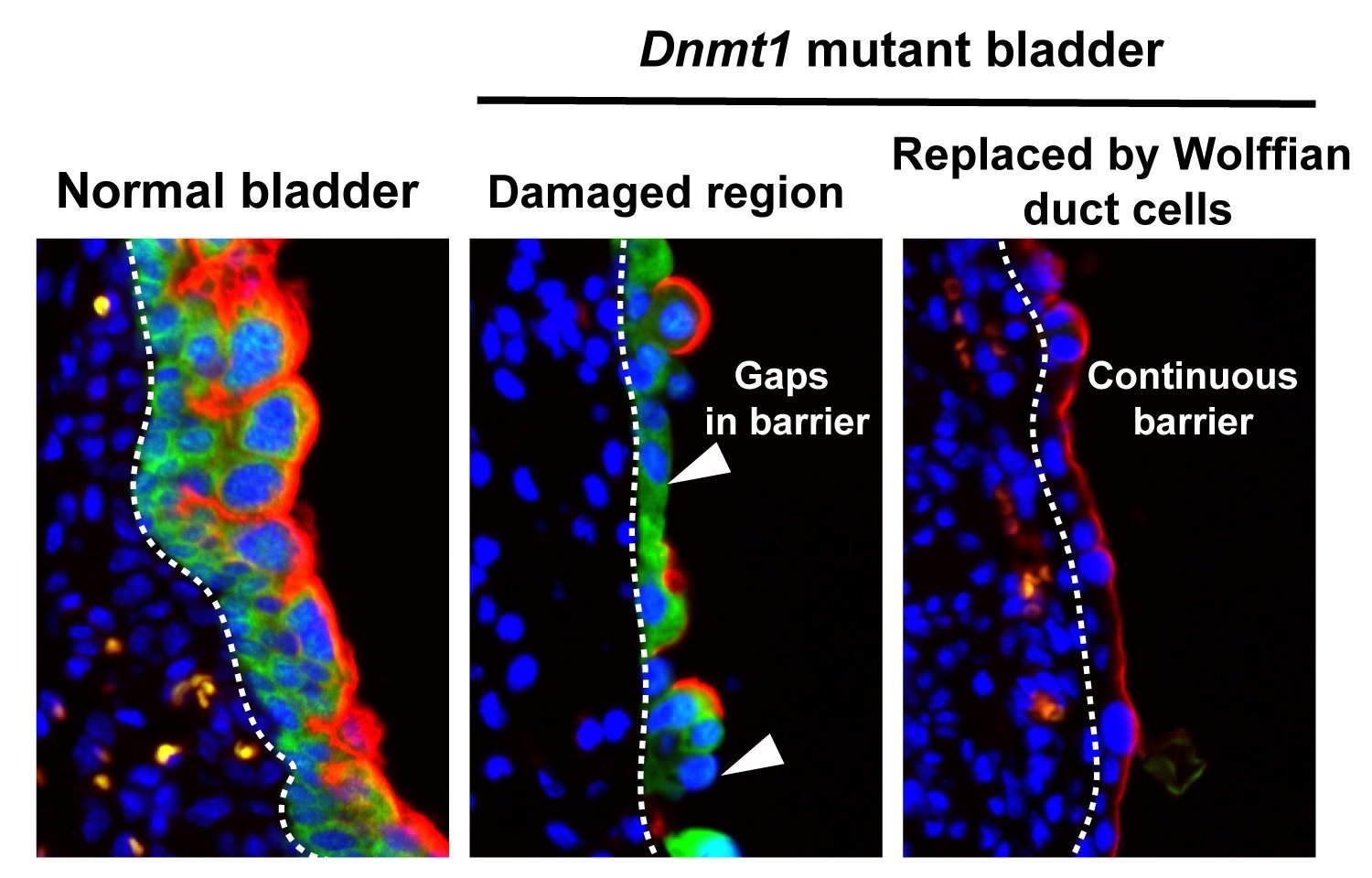 The bladder is a master at self-repair. When damaged by infection or injury, the organ can mend itself quickly, calling upon specialized cells in its lining to repair tissue and restore a barrier against harmful materials concentrated in urine.

But a new study in mice from researchers at the University of Wisconsin–Madison School of Veterinary Medicine (SVM) shows for the first time that non-bladder cells from a nearby anatomical structure called the Wolffian duct can actually provide an assist. It can contribute cells that migrate to the bladder, adopt bladder-like characteristics, and help restore the organ’s function.

“We saw these other cells come in to compensate for the loss of bladder cells,” says Diya Joseph, a UW–Madison doctoral student and lead author of the new study, published this week in the Proceedings of the National Academy of Sciences.

The surprising discovery carries important implications for potential therapies for bladder-related diseases and for patients’ quality of life related to bladder function and incontinence. These are often overlooked areas of study, says Chad Vezina, professor of comparative biosciences at the UW–Madison SVM, who led the new work.

“Urinary health is so widely valued, but still considered a taboo topic,” says Vezina. This taboo, he adds, has hindered progress.

In the new study, the research team was investigating the role of a specific gene called DNA methyltransferase 1 (Dnmt1). This gene modifies cell behavior during bladder and urethra development in mouse embryos. By removing it, Joseph says, the scientists could better understand the role the gene plays in the formation of the urinary tract.

“Out of any other organ system, the urinary tract has the highest risk of congenital malformations,” Vezina explains.

The researchers showed that inactivating Dnmt1 triggered widespread cell death in the embryonic bladder and urethra, depleted the bladder progenitor cells that are needed for epithelial repair, and disrupted the expression of uroplakin, a protein essential to the barrier function of the bladder lining. 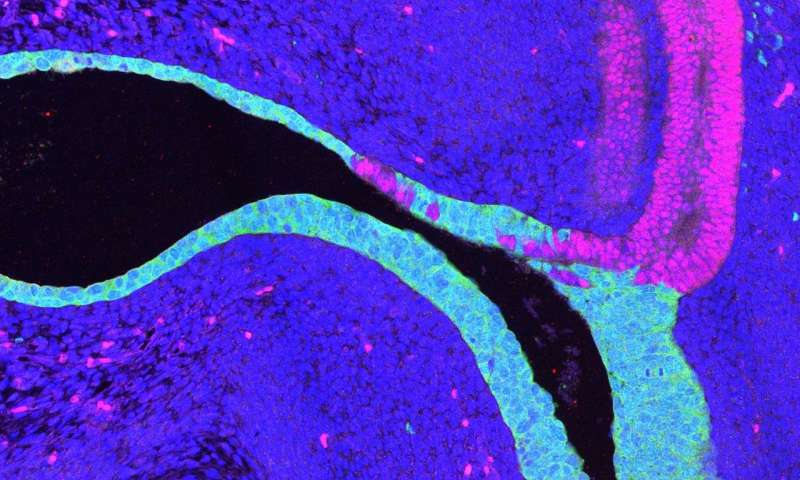 “These cells that form as progenitors during early stages of development repair the bladder after injuries in later life. If you remove them, the integrity of the bladder lining is lost,” Joseph explains.

Several layers of specialized tissue in the bladder, the epithelium, act as an internal barrier against waste products in urine that could otherwise seep into the body or cause irritation in the event of a breech to the bladder lining.

“There are a lot of nerves in the bladder and when you compromise that barrier, things can touch the nerves – they’re exposed in a way that they never should be,” Vezina explains. “A good example of this is if you’ve ever had a urinary tract infection, you know it’s excruciatingly painful and irritating. That’s because the lining of your bladder has been compromised.”

The researchers discovered, unexpectedly, that in the Dnmt1-inactivated mice, Wolffian duct epithelial cells migrated into the bladder, transformed to look and behave like bladder cells, and restored the expression of the uroplakin barrier.

Vezina likens this sequence of events to a community requesting assistance from neighboring fire crews during a four-alarm blaze. “The organ is saying ‘I need help.’ And neighboring cells come in to make an assist.”

The team is now working to identify the specific cues that marshal this defense, as well as opportunities to utilize those cues for improved bladder replacement therapies.

“You can call out the alarm and bring in fire trucks from surrounding communities, but there still needs to be a captain who tells the firefighters what to do,” says Vezina. “In the bladder we have to figure out which orders are being shouted to get cells to pick up new duties.”

For instance, the researchers would like to know what signals the bladder epithelium is producing that results in the reprogramming of Wolffian duct cells, says Joseph. “Those signals could maybe be used to convert stem cells to bladder-like cells, and then you could use those cells to make an artificial bladder.”