The first new migraine drug for 20 years will be available in Britain within weeks after European health officials granted it a licence yesterday.

Erenumab – a monthly jab – is said to prevent nearly half of migraine attacks for people with few other treatment options.

The pharmaceutical firm Novartis is preparing to ship it into Britain, and expects patients will be able to get the drug privately within six weeks. 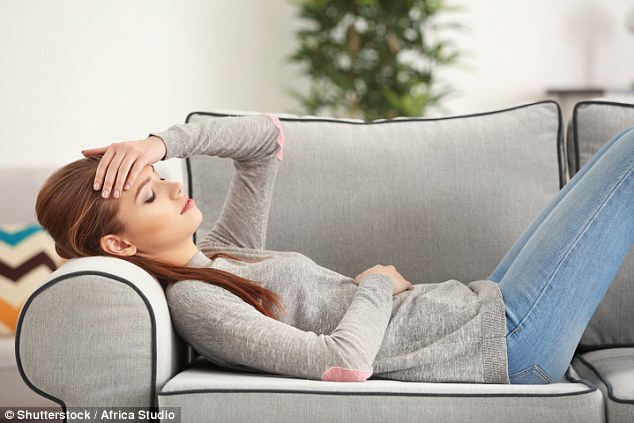 The UK price for the treatment, which is sold under the brand name Aimovig, has not been announced, but in the US it costs £438 per injection – or £5,250 a year.

Erenumab, which took British scientists three decades to develop, is also being assessed by the UK drugs watchdog NICE for use on the NHS, with a ruling due next year.

However, the European Commission has now given permission for it to be prescribed to patients who have migraines on at least four days a month.

If it is also approved by NICE, around 500,000 Britons would be expected to benefit. More than eight million Britons – three quarters of them women – have attacks, suffering dizziness, nausea and headaches.

But until now there has been no specific treatment to prevent the problem, with patients instead given beta blockers, antidepressants and even Botox to reduce agonising symptoms.

A spokesman for The Migraine Trust said: ‘This decision is wonderful. Migraine is incredibly painful, and has symptoms that include vomiting and visual disturbance, so getting it frequently can literally ruin lives.’

Erenumab is the first of a class of drugs to tackle the protein responsible for the pain and nausea of a migraine. The protein – called calcitonin gene-related peptide – causes blood vessels intertwined with nerve endings in the head to swell.

Erenumab blocks that process. But it has been a long time coming. An injection to tackle migraines effectively has been sought by the world’s biggest drugs firms for decades.

The jab, which is self-administered into the thigh or belly with an injection pen, is the first treatment since Triptans – medication that eases the symptoms but does not deal with the cause – was developed in 1997.

A study in the New England Journal of Medicine found migraines were cut from eight days a month to four among patients using the drug, which was created by Professor Peter Goadsby of King’s College London. He gave up his intellectual property rights to the drug.

It is made in a partnership by the drugs firms Novartis and Amgen. But others are developing treatments to get a share of a market worth £6.5billion a year.

Professor Goadsby, of the NHS-funded National Institute for Health Research clinical research facility at King’s, said: ‘It’s wonderful to see something through from the start, to the stage where a large number of people are to benefit.’