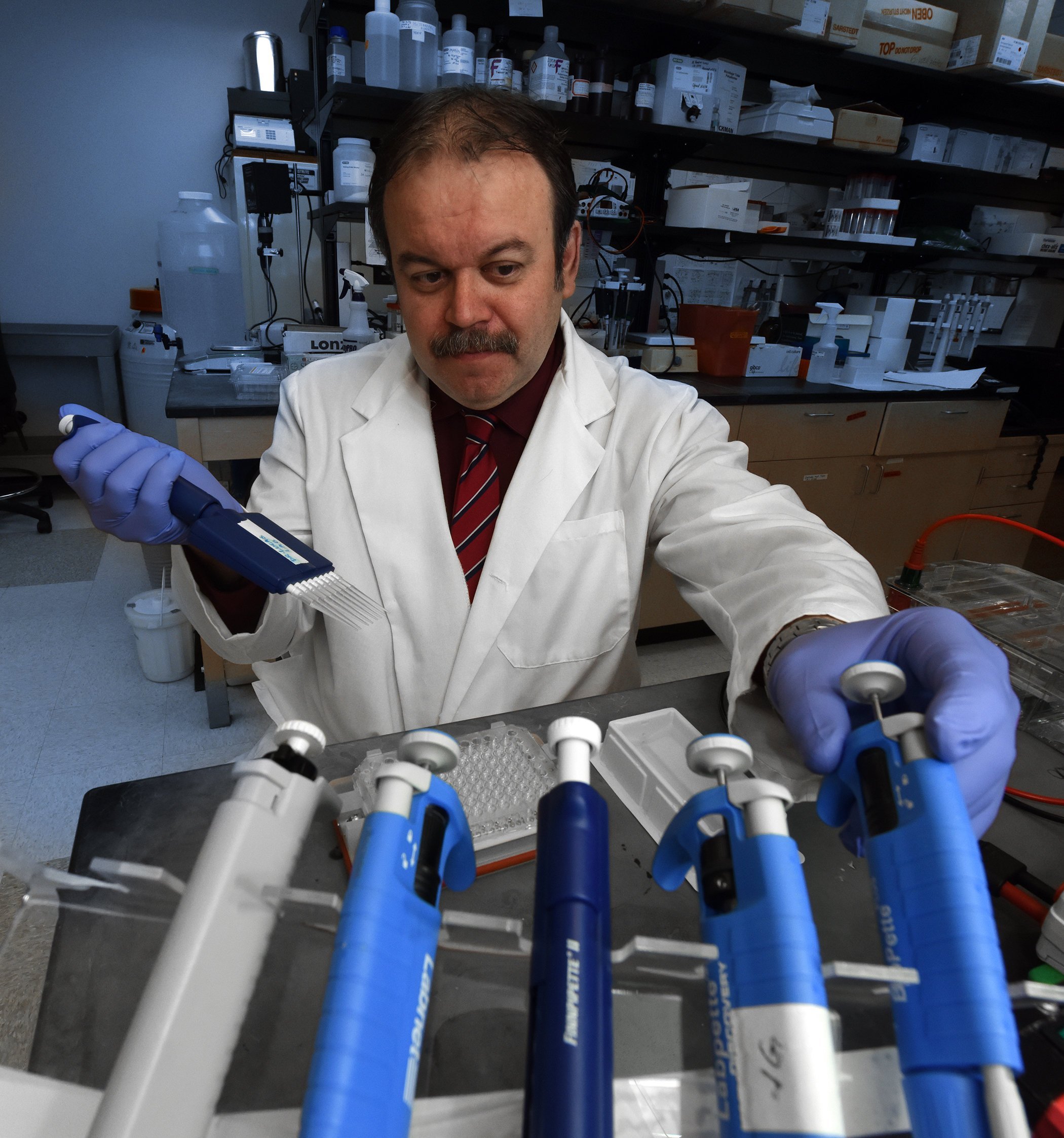 Severe pneumonia causes a buildup of fluid in the lungs that makes the basics of breathing and getting oxygen out to the body difficult to impossible.

Scientists are exploring a new target for treating both barrier leakiness and fluid buildup that, in lab animals and early human trials, seems to restore tight barriers and fluid clearance so we can breathe.

Fluid follows sodium and the investigators are targeting ENaC-alpha, a subunit of natural channels that mediate sodium uptake and play a role in fluid movement, says Dr. Rudolf Lucas, vascular biologist at the Vascular Biology Center at the Medical College of Georgia at Augusta University.

Lucas and his colleagues propose ENaC-alpha also has a role as a signaling molecule that tightens barrier function in the air sacs and tiny capillaries of our lungs when pneumonia-causing bacteria make both leaky.

They have a synthetic version of the tip of a molecule known to target cancer that appears to directly activate ENaC-alpha, and help clear our lungs.

“It closes the barriers in the capillary lining, it improves sodium channel function and liquid clearance in the lung sacs, and we also found it reduces inflammation,” Lucas says of activation of ENaC-alpha with their synthetic TIP peptide.

Limited clinical experience with the peptide indicates that the sicker the patient, the better it works. Laboratory studies indicate that when they delete ENaC-alpha from cells, the peptide doesn’t work, Lucas says.

A new $2.5 million grant from the National Heart, Lung and Blood Institute is enabling more laboratory studies to learn more about just how targeting ENaC-alpha may improve survival from this top 10 killer of both young and older individuals.

ENaC, or epithelial sodium channel, normally helps remove excess fluid from our 300 million air sacs, a demand that increases with pneumonia. The scientists have evidence that ENaC-alpha is a component of both highly selected cation channel, or HSC, and non-selective cation channel, or NSC, which both have a role in sodium uptake and fluid elimination.

They’ve shown ENaC-alpha is active in the single cell layer, or endothelium, that lines tiny blood vessels in the lungs and helps keep contents inside, in addition to the epithelium, a membrane-like lining inside the lungs’ air sacs that aids gas exchange and also works as a natural barrier to keep excess fluid out.

They think at least one way the ENaC subunit helps out is by blunting changes to the protein filamin-A. Unchanged, this protein both supports barrier function and fluid clearance, but alterations can essentially make it do the polar opposite.

The new grant is enabling additional studies of just how their peptide and ENaC-alpha partner. So they are doing things like making mice with ENaC-alpha missing in the endothelium but present in the epithelium.

“If it still works, we know that it’s mainly because it improves liquid clearance from air sacs and barrier strengthening might not be as important,” says Lucas. “But if it eliminates a lot of the protective effect of the TIP peptide, it will shore up the importance of also reducing capillary leakage,” says Lucas, who suspects both really matter.

They also are looking at how the TIP peptide activates sodium channels in the face of both bacteria and the toxins they spew when they die. While antibiotics are needed to kill the bacteria causing pneumonia, as the bugs die they can release the toxin pneumolysin. The known phenomenon, which tends to occur particularly in severe pneumonia, results in the toxin making holes in the barriers of both capillaries and air sacs, creating what the scientists call a second wave of fluid accumulation and potentially death.

Critical care physicians know about the potential toxin release, but currently don’t have therapies against it, Lucas says. There also is currently no way to identify ahead of time which patients will experience it.

In their new studies, they are looking at what happens when they activate just NSC or HSC as well as both channels, which is what the TIP peptide does. They are also looking at what happens to sodium uptake capacity in the epithelial cells of air sacs when they genetically deplete or overexpress ENaC-alpha then expose the cells to a pneumonia-causing bacterium as well as the toxin the dying bacteria produce. If it continues to work, they want to know if they are correct that it works by inhibiting pathways that can alter filamin-A.

They suspect they will find again that direct activation of ENaC-alpha is sufficient to improve fluid clearance from air sacs and barrier function in capillaries in both pneumonia models as well as isolated, perfused human lungs.

“The lung sacs that transport oxygen to the blood need to be preferentially empty,” Lucas says. “If they are filled with liquid, it’s a problem.”

Despite the proximity of airs sacs and capillaries, the presence of excess fluid in air sacs is like swimming upstream as oxygen tries to travel through fluid to get to the capillaries and the blood.

“The problem is that these channels that aid fluid clearance are closed more often than they are open when you have a bacterial infection or inflammation,” Lucas says.

In later stages of the grant, co-investigator Dr. Michael Matthay, critical care specialist and professor of medicine and anesthesia at the University of California, San Francisco, will be perfusing cadaver lungs as a ventilator would in an ICU, treating them with the same bacterium used in their mouse model, then looking at the effect of TIP peptide treatment on things like capillary leaking.

Dr. Douglas C. Eaton, Distinguished Professor in the Department of Physiology at Emory University School of Medicine and Lucas’ longtime collaborator on this and previous studies, discovered NSC’s role in fluid clearance. Lucas and Eaton also discovered that the TIP peptide can activate ENaC-alpha as well as the HSC and NSC channels.

The TIP peptide already has been tested in Europe for acute lung injury—patients with pneumonia, and/or trauma or sepsis- and Lucas and his colleagues are pursuing additional studies in pneumonia and lung transplantation. The Food and Drug Administration recently granted the peptide orphan drug designation status for lung transplantation, so it can already be used as an alternative treatment. The peptide appears to help minimize problems like excess fluid accumulation in a newly transplanted lung from something called ischemic reperfusion injury. In all trials to date, all patients taking the peptide were weaned from the ventilator much faster, Lucas says.

In phase 2a clinical trials, the peptide has been given through a ventilator. Lucas notes the reality that high ventilator pressures needed to help sustain the sickest pneumonia patients actually can worsen the damage.

New therapies that have been studied to address the complex problems that a bacterial infection can yield in the lungs, have addressed only a single issue, like capillary leakiness, and have failed, Lucas says.

“We had to find something that addresses all these points,” Lucas says. In both extensive laboratory studies and some early clinical use in other counties, the TIP peptide seems to do just that.

“We actually use a part of a natural cytokine to, let’s say, balance the system,” Lucas says. He notes that, as with anything, there is danger from overactivating the mechanisms that keep barriers tight and enable fluid clearance from air sacs.

“But we want to activate it again,” says Lucas. He notes that one of the ill effects of overactivation would be air sacs that are actually too dry, which is one of the problems in cystic fibrosis, but they have no evidence to date that the TIP peptide goes that far.

“It looks like the peptide just brings the system back to normal functioning level,” he says, noting that there could be some natural brake that helps prevent overactivation. He also notes that ENaC channels actually normally function at a low rate but when they don’t function, it’s highly lethal.

The TIP peptide is attracted to the sugar coating at the mouth of the sodium channel, and works like a doorstop to keep the channels open in animal models.

In pneumonia, the toxin pneumolysin also directly impacts the sodium channels at a time when there is increased fluid volume in the tiny air sacs, Lucas and team reported in last year in Frontiers in Immunology. Their synthetic peptide, TIP, strengthens human endothelial cells exposed to pneumolysin.

A clinical study published last year in the journal Critical Care showed that inhaled treatment with the TIP peptide helped patients with more severe pulmonary edema who required a ventilator better clear their lungs of fluid.