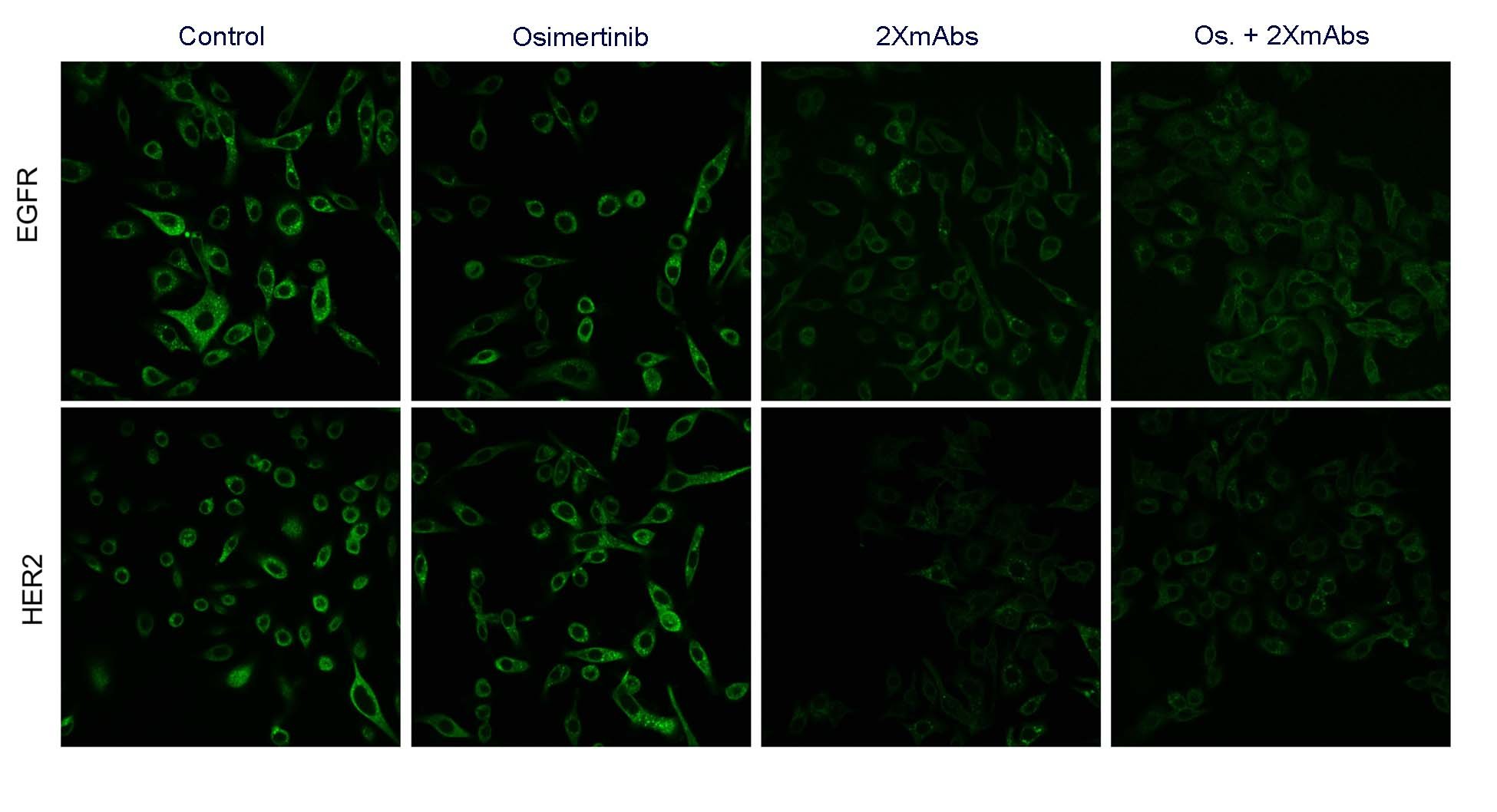 New-generation lung cancer drugs have been effective in a large number of patients, but within about a year, the patients tend to develop resistance to the therapy. Researchers at the Weizmann Institute of Science, in collaboration with physicians, have conducted a study in mice, in which they used existing drugs in a new combination to help crush potential resistance to the treatment. Their findings were published recently in the journal Clinical Cancer Research.

Lung cancer is the most common cause of death from malignancy, accounting for about one-fifth of cancer deaths worldwide according to World Health Organization estimates. New drugs treat certain subtypes of this cancer by targeting the genetic mutations characteristic of each subtype.

In about 12%, on average, of lung cancer patients—most of them non-smokers—the malignancy is due to a mutation in a gene called EGFR. This gene encodes a receptor that is embedded in the cell membrane, protruding in both directions: Its “head,” the outer portion on the cell surface, binds with a growth factor that transmits a growth signal to the cell; the “legs,” the inner portion inside the cell, works as an enzyme that further conveys the signal to the cellular nucleus. EGFR’s growth message prompts the cell to divide which normally serves a good purpose—for example, helping tissues to heal—but a mutation on the inner part of the receptor can cause the cell to divide uncontrollably, leading to cancer.

Patients with the EGFR mutation can be helped by small molecules known as kinase inhibitors, which block the mutation, preventing EGFR from generating a signal for uncontrolled division. These drugs work much better than chemotherapy: They are more effective and cause fewer side effects, and they can be taken as a pill rather than by injection. The problem is that within 10 to 14 months many of the patients develop a secondary mutation in the EGFR. This causes their tumors to relapse because it enables EGFR to get around the kinase inhibitor

In 2015, a new kinase inhibitor known by the trade name Tagrisso, which blocks this second mutation, was approved for clinical use when the lung tumor starts growing again. Tagrisso helps, but usually not for long. Again, within 10 to 14 months a third mutation or other alterations emerge in the EGFR gene, causing another relapse.

“This of course is a nightmare for the patients, their families and the doctors,” says Prof. Yosef Yarden of the Biological Regulation Department. “We’ve now developed a new approach that works in mice and may help relieve this frustrating situation if our method proves to work in humans.”

In collaboration with physicians from the Chaim Sheba Medical Center in Tel Hashomer, Israel, Yarden’s team tried out a combination therapy. Mice implanted with human lung cancer cells were given Tagrisso and a drug that blocks the EGFR on the cell surface. This drug was Erbitux, an antibody that binds to the protruding outer portion of the EGFR, preventing the cell from receiving the growth message. The Tagrisso they were given works inside the cell, preventing the inner portion of EGFR, the growth-promoting kinase, from relaying the growth signal.

This original attempt at a combination therapy had proved unsuccessful, probably because when EGFR is blocked on the cell surface, it calls upon a close “relative,” a receptor called HER2, to pop up on the cell membrane. So in the new study, the researchers gave mice a triple combination therapy, which apart from Tagrisso included two antibodies instead of one: Erbitux and a drug called Herceptin, which blocks HER2.

This time the approach worked. Tumors shrunk substantially and did not regrow as long as the mice received the triple combination treatment. The use of this approach in human patients should be facilitated by the fact that both antibodies are drugs already approved for use against other cancers: Erbitux is used in colorectal and Herceptin, in breast, cancer.