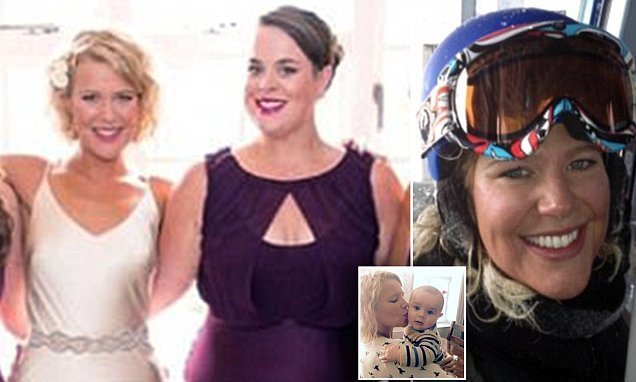 Dementia at 31: Woman reveals how the brain disease has ravaged the life of her big sister, who is one of the youngest people to be diagnosed with the condition

The sister of a woman who was diagnosed with dementia at the age of 31 has opened up about how the disease has destroyed her once-lively sibling’s life.

Becky Barletta’s family first noticed in 2016 she started saying things that were out of character and inappropriate, and they thought she might be depressed.

But the reality was much worse – Becky, a 31-year-old newly married ski instructor, was soon diagnosed with the uncommon condition frontotemporal dementia.

And her family say she is the youngest person her doctor has seen with the condition, and think she is one of the youngest people in the UK to have been diagnosed.

Now, two years after her diagnosis, sister Sophie Gilbert reveals the horror of watching the spark go out of her sister’s life as the condition destroys her brain.

Mrs Gilbert, a 31-year-old mother of two from Hundon in Suffolk, lives next door to their parents’ house, where Mrs Barletta now lives with her parents and a carer.

She tells MailOnline how her sister’s personality has changed, she rarely talks to people, and has problems swallowing and going to the toilet.

Mrs Gilbert is sharing her story to raise awareness of the condition which, unlike many cases of dementia, often starts in younger people, and to promote the Alzheimer’s Society’s Memory Walk fundraisers. 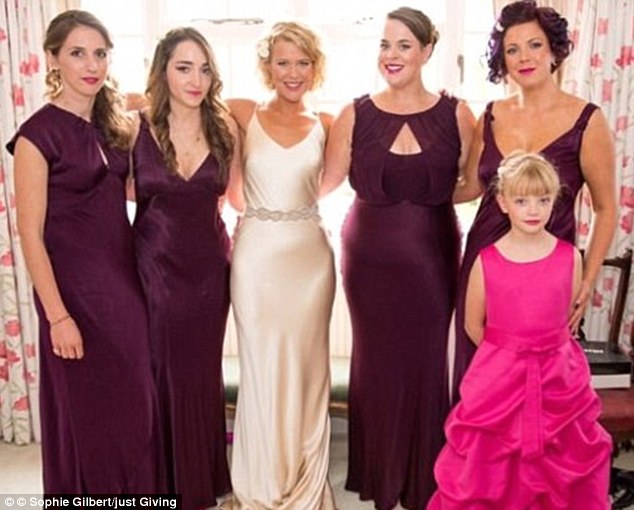 Until August 2016, Mrs Barletta worked full-time as a ski instructor in Verbier, Switzerland.

She enjoyed running and going to the gym twice a day, and was an ‘outgoing extrovert’, her family say.

But now she is reliant on round-the-clock care, needs help to drink, does not talk to members of her family and is only able to go for walks as her body continues to get weaker.

The harrowing transformation has been ‘breathtaking’ and has stunned her family and friends with its speed and brutality, says her sister.

Mrs Gilbert, who lives with husband Ben and children Alfie, three, and Emelia, one, helps to run the family’s baking business, Dorringtons.

‘Becky doesn’t really talk any more,’ Mrs Gilbert tells MailOnline. ‘We used to get a lot of screaming and shouting and repetitive stories, but now she just mutters things under her breath.

‘Although hearing the same stories over and over again was frustrating I knew I would miss it when she stopped and I do now – at least it was something. 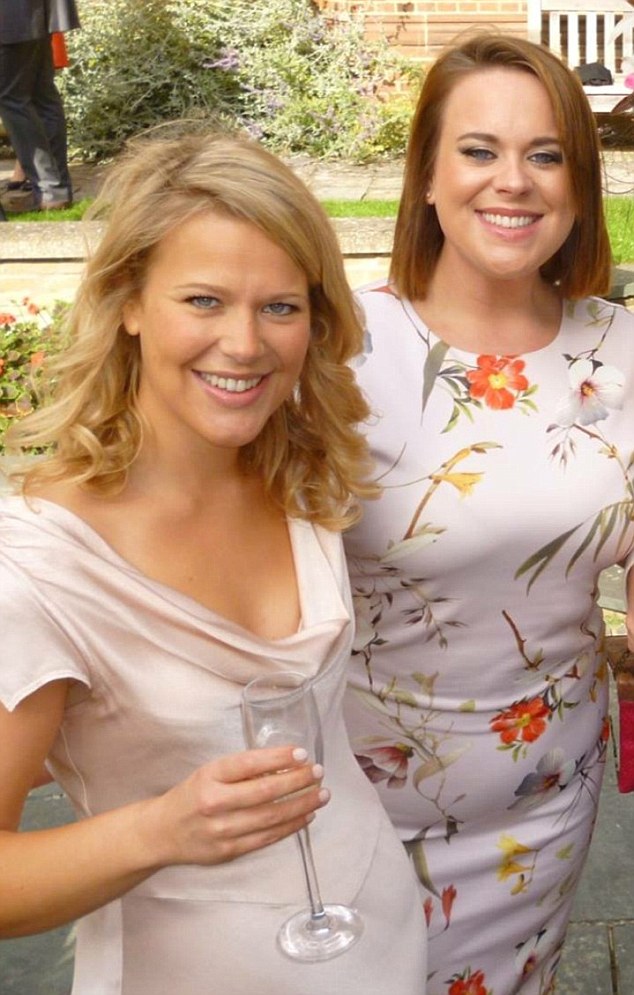 Mrs Barletta (left) used to extremely active and outgoing before she was struck down by an uncommon form of dementia, according to her sister Sophie Gilbert (right) Becky Barletta used to work as a ski instructor in Switzerland and go to the gym twice a day, but she now relies on round-the-clock care because of an uncommon form of dementia

‘The speed of what has happened has been breathtaking.

‘Of course you just go through life just getting on with things but when you sit down and think about what has happened it does take your breath away.

‘She was still driving the day before she was diagnosed’

‘I remember she was still driving up until the day before she was diagnosed two years ago, when doctors said she couldn’t drive any more.

‘She used to be so active and outgoing. She loved socialising, was chatty and beautiful, and put 110 per cent effort into everything.

‘It’s like a nightmare you just want to wake up from.’

Mrs Barletta’s family think she is one of the youngest people in the UK to have been diagnosed with frontotemporal dementia.

Her father, Allan Sharples said last year: ‘Rebecca is the youngest person with it to have been seen in Cambridge and presumably she must be one of the youngest in the country as Professor Rowe is one of the leading experts.’

Although dementia is common and affects around 850,000 people in the UK and 5.7 million Americans, frontotemporal dementia is far less common.

It mainly affects the front and sides of the brain – the frontal and temporal lobes – which control people’s language and behaviour. 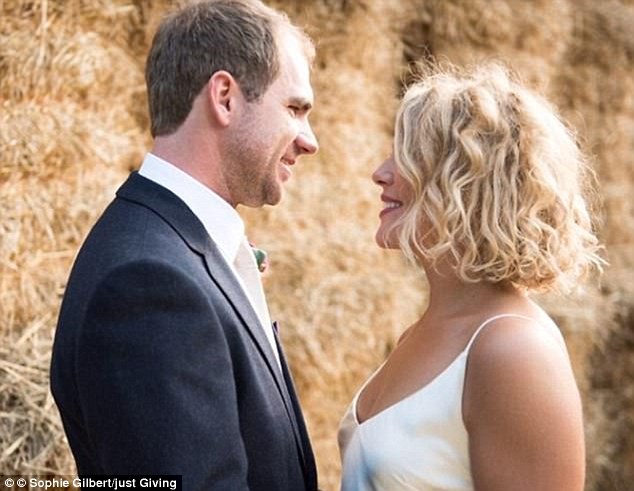 Mrs Barletta married her husband Luca (left) in October 2015 – the pair had met while working together as ski instructors in the Alps. He still runs a business there but regularly comes back to visit her and help the family 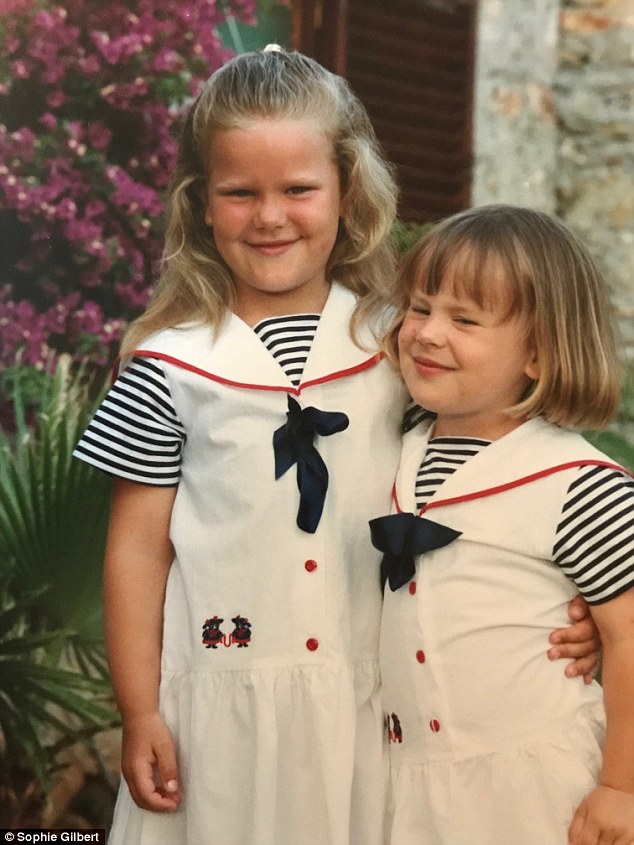 Becky Barletta and Sophie Gilbert, pictured as children with Sophie on the right, are both now married and live in Hundon in Suffolk with their parents, who look after Becky

Most cases are diagnosed in people aged under 65 which sets it apart from, for example, Alzheimer’s disease which causes the majority of all dementia cases and is more common among elderly people.

Over time frontotemporal dementia causes the brain to degenerate, affecting people’s ability to speak, remember things, focus or organise themselves, and eventually ends up being fatal.

Other family members struck down by the same disease

The condition is thought to run in Mrs Barletta’s family – her uncle and mother’s cousin have already died from it.

WHAT IS FRONTOTEMPORAL DEMENTIA?

Frontotemporal dementia, also known as Pick’s disease, is an uncommon form of the fatal brain degeneration.

It begins specifically in the frontal and temporal lobes of the brain, which control people’s speech and behaviour.

It is caused by nerve cells dying in the temporal lobes – on either side of the brain – and as more and more tissue dies the brain begins to shrink.

The death of the cells, and changes in electrical signals in the brain, can cause people’s behaviour and personality to change.

The condition is not thought to have as big an impact on the memory as Alzheimer’s disease, because a different part of the brain is affected.

Frontotemporal dementia is thought to affect men and women equally, and is most often diagnosed in people aged between 45 and 65.

There is no cure and treatment is focused on caring for patients and trying to manage their symptoms.

Mrs Barletta’s doctor said he expected her to live between five and 10 years after her diagnosis two years ago, her sister said, but she says the change has been so rapid she thinks that was ambitious.

‘I can’t see what the next two years will look like unless her condition plateaus,’ Mrs Gilbert said. ‘Becky is completely dependent on my parents and her carer.

‘We make her squash into a jelly so it triggers the reflex when she chews.

‘In a way she is easier to manage now that her condition is worse because she doesn’t run away, scream at people or pinch food from their plates in public.

‘But now there’s just no engagement at all. She’s vacant, which is one of the hardest things to cope with – you would never know if she was happy or sad.

‘I just hope she’s content in her own little world.’

Mrs Barletta still goes for a couple of walks every day with her carer or her father, who is 70 years old and retired, her sister said.

And she also has a weekly singing lesson with a local woman – which has changed from Mrs Barletta taking part to mostly being sung to. 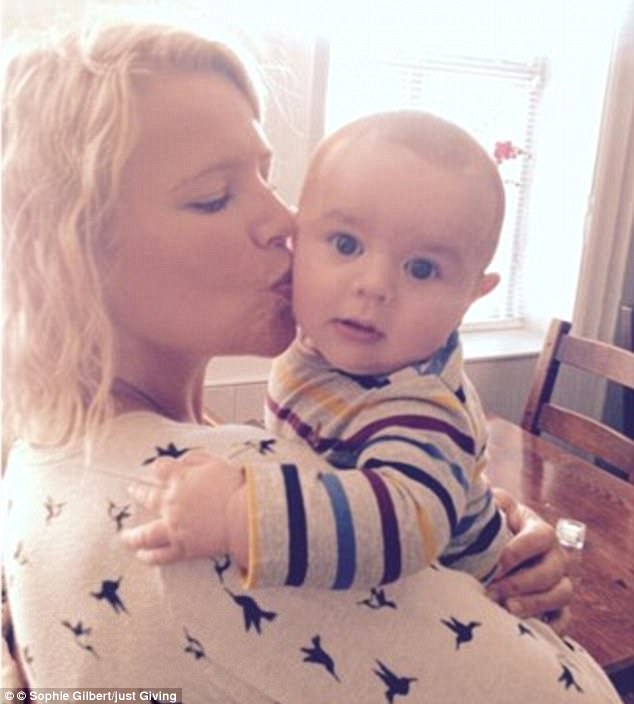 Mrs Barletta (pictured with nephew Alfie) was given between five and 10 years to live when she was diagnosed in August 2016, but her sister Mrs Gilbert says her decline has been rapid

Mrs Barletta’s husband Luca, whom she married in October 2015, still runs a business in the Italian Alps but comes back at weekends and as often as possible to visit his wife and help the family.

The family visit doctors regularly but there is no way for them to slow down the disease, nor work out what caused it – they believe it was simply inherited.

‘It breaks my heart she will never get to have children’

Mrs Gilbert added: ‘What’s most shocking is the stark difference between who she is and who she should still be.

‘Because she was such a life it is more horrendous. She was just married and it breaks my heart that she will never get to have children.’

‘We want to make people aware this could strike anyone at anytime. It can happen in your 50s, 40s and clearly even in your 30s.

‘It’s relatively unheard of for people so young to get dementia.

‘People try to reassure me “you won’t get it” but you would have said the same thing about Becky. It’s a panic for me every time I forget something or hit the kerb in my car.’ 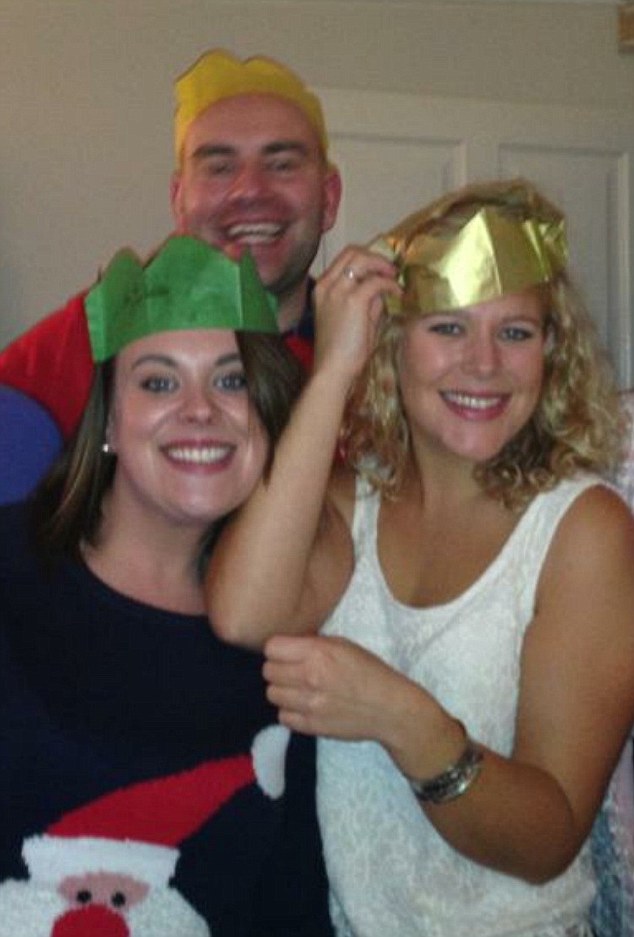 Mrs Barletta (right), pictured with her sister Sophie and brother-in-law Ben, used to be outgoing and chatty but now rarely speaks to anyone because of the effects of dementia 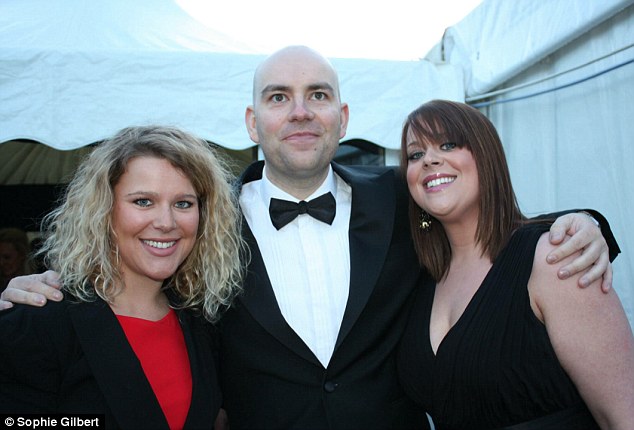 Mrs Gilbert (right), pictured with her sister and husband, is now committed to raising awareness of dementia and fundraising for the Alzheimer’s Society which pays for research into the disease 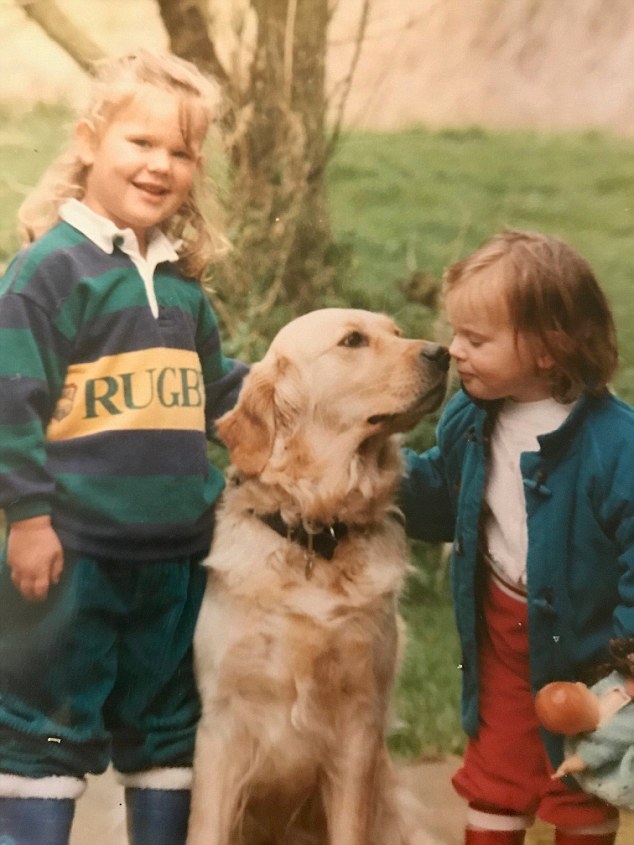 Mrs Gilbert (pictured as a child, right, with her sister and their dog) says her sister’s decline has been even more stark because she was so fit and healthy beforehand

The family now want to shine a light the Alzheimer’s Society charity and its annual Memory Walks which raise money for research into dementia.

They held a fundraiser at their home last year which raised more than £15,000 for the charity, and plan on raising more money in the future.

There will be 41 Memory Walks held across the country this year, which hope to raise £9 million towards dementia research. 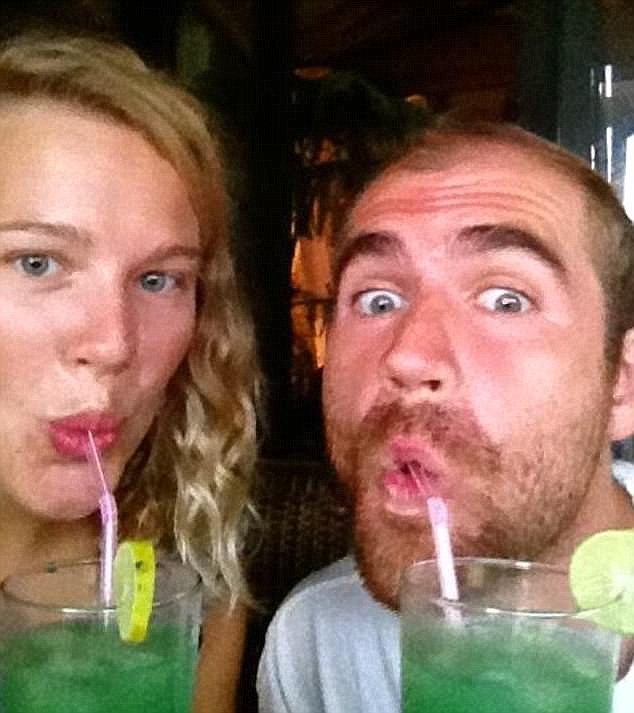 Mrs Barletta, pictured with husband Luca before her diagnosis, was still driving until the day before she was diagnosed, when her life quickly changed from normality

‘Dementia can affect anyone at any age’

Mrs Gilbert adds: ‘We’ve got to get the message out there that dementia can affect anyone at any age.

‘Research is coming along leaps and bounds and hopefully it’s something my children won’t have to worry about in the future.’

‘We are therefore enormously grateful that Becky and her family and their friends have united with Alzheimer’s Society to help us defeat dementia.

‘Their fundraising effort last year was inspirational and together they raised more than £13,000 with their own Memory Walk.

‘I would urge MailOnline readers to unite with us and join a local Memory Walk today.’

People can help fund vital research for a cure by signing up to their nearest Memory Walk online.

The number of people suffering with dementia is rising as better quality of life and improved medical care means people are living longer.

Some 850,000 Brits, 5.7 million Americans and 425,000 Australians are believed to be living with the condition, which cause brain deterioration.

Around 50 million people worldwide have dementia – someone is diagnosed every three seconds – and the total number is expected to more than double to 131.5 million by 2050.

The total estimated worldwide costs of dementia were US$818 billion in 2015.

Experts from the University of Exeter warned last year that the amount of drug trials being done for the condition is ‘critically low’ and that research is lagging behind that being done into cancer.

While there are more than 1,000 currently active clinical trials trying to beat cancer globally, there are just 142 looking at Alzheimer’s disease, the main cause of dementia.

And only 29 of those have progressed past the first phase of testing – 40 times fewer than cancer trials at the same stage.

Scientists say researching how to slow down or treat the illness is now an ‘urgent priority’ because there have been no new treatments licensed since the 1990s.