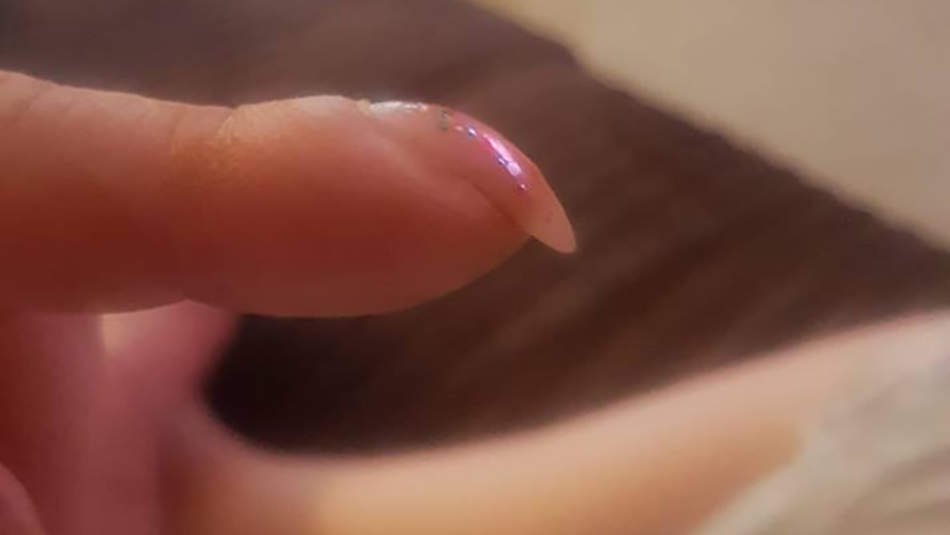 Most people know to schedule an appointment with their doctor ASAP if they feel a strange lump on their breast or neck. But signs of cancer can be less obvious, too—some, like a pimple that doesn’t go away, a hoarse voice, or a “foreign body sensation” in your throat, can seem completely random. Another unexpected symptom to add to that list? Clubbing in the nails, which occurs when fingertips swell and cause the nail to curve downward, and in rare cases could be an early sign of lung cancer.

This is something a woman from the United Kingdom recently learned firsthand. After posting a photo of her curved nail on Facebook and asking if any of her followers “had seen nails like this,” JeanJeannie Williams Taylor‎ was “urged to go to the doctor” to have it looked at more closely.

Although Taylor thought this reaction was “a tad extreme,” as she wrote on Facebook, she took their advice. Soon after, she found herself rushed through a series of tests, including bloodwork, a chest X-ray, CT scan, PET scan, MRI scan, and lung biopsy. After what she calls a “grueling” two weeks, Taylor received her diagnosis: cancer in both of her lungs.

##awareness#
2 weeks ago i posted this pic on my wall asking if anyone had seen nails like this. A few google post later…

Although the average person might not necessarily associate clubbing with potential illness, it’s a well-known red flag in the medical community. “Any good doctor who sees someone has clubbing will know that they may have some sort of lung disease, heart disease, or gastrointestinal disease,” says Eric Presser, MD, a thoracic surgeon and member of First California Physician Partners.

In addition to lung cancer, Dr. Presser tells us that clubbing could be an early tip-off for a slew of other health conditions ranging from pulmonary fibrosis to mesothelioma to malabsorption problems such as Crohn’s disease or ulcerative colitis. Although experts don’t know exactly what causes this symptom, one theory is that certain chronic illnesses trigger a change in the curvature of the nail bed when blood vessels dilate in that part of the body.

Still, “people shouldn’t freak out if they have clubbing,” says Dr. Presser, noting that many cases are benign. The most important thing is to be in tune with your body and schedule a doctor’s appointment if you spot something unusual. “If you do notice this change, make sure you talk to your doctor about some of the potential possibilities that you want to rule out,” he says.

As for Taylor, she writes that while she had “no idea” clubbed nails could be a sign of lung cancer, she’s hoping her post can help raise awareness for this unexpected symptom—and perhaps help someone else who might be in the early stages of lung cancer as well.