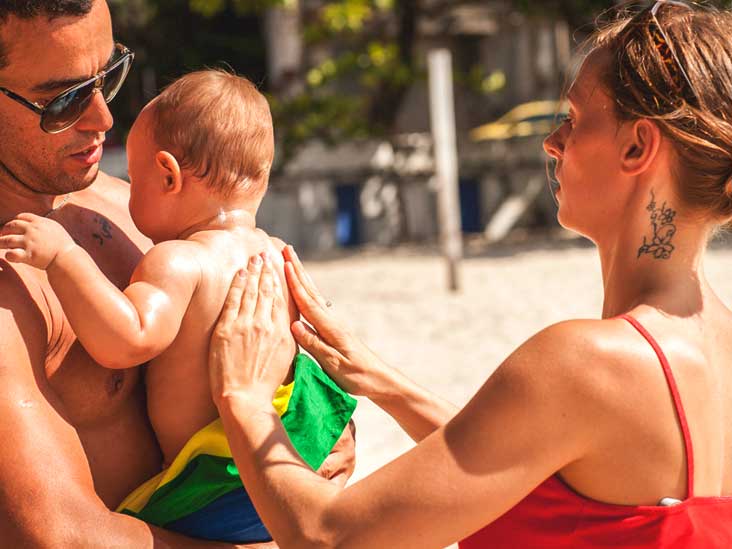 Study finds slathering kids in sunscreen can protect them into adulthood.

If you needed another reason for your family to use sunscreen this might be it: Regular sunscreen use in childhood can reduce the risk of melanoma by 40 percent in young adulthood.

A recent study examined the association between sunscreen use and melanoma risk in people under the age of 40.

Researchers from the University of Sydney gathered data from 1,700 people who took part in the Australian Melanoma Family Study.

“We found that Australians aged 18 to 40 years who were regular users of sunscreen in their childhood reduced their risk of developing melanoma by 40 percent compared to those who rarely used sunscreen. Lifetime use of sunscreen was associated with a 35 percent reduced risk of melanoma,” Dr. Caroline Watts, author of the study and post-doctoral researcher at the University of Sydney, told Healthline.

Watts and her colleagues found those who use sunscreen regularly achieved the greatest benefit. A regular sunscreen user by Watts’ definition would be a person who applies sunscreen always or almost always when they are in the sun or plan to be in the sun.

Dangers for kids in the sun

“Toddler skin is much thinner then adult skin and more susceptible to burning,” Dr. Adam Friedman, a professor of dermatology at the George Washington School of Medicine and Health Sciences told Healthline. “In fact, a sunburn in a baby can be a medical emergency as sunburned skin cannot regulate temperature, or water loss as well, and is at higher risk for infection.”

Babies younger than six months should always remain in the shade and not be exposed to direct sunlight. Friedman also advises caution when allowing toddlers to run around without clothes in the sun.

“Regular users of sunscreen were more likely to be female, of British or northern European ancestry, and to have higher education levels, lighter skin pigmentation, and a stronger history of blistering sunburn,” Watts said. “This may be related to women being more receptive to messages about sun protection, or that many cosmetic products have sunscreen in them.”

Dr. Oma Agbai, an assistant professor of dermatology at the University of California, Davis, says that it’s possible such demographics may be utilizing sunscreen for aesthetic rather than health reasons.

“Some of my patients in this demographic may be driven by cosmetic motivations. In other words, they may want to use sunscreen in order to prevent UV-induced premature aging and photodamage,” she told Healthline.

But others may use sunscreen due to previous bad experiences with sunburn.

“Those with a history of blistering sunburn may seek to avoid the pain and discomfort associated with prior sunburns by wearing sunscreen,” Agbai added.

The dangers of sunburns

Despite the benefits of sunscreen being well established, experts say many people still fall victim to myths and misinformation by choosing not to use sunscreen.

“There is a lot of misinformation and I have heard it all. It’s not safe, it’s not organic, I need my vitamin D, it causes cancer, it is polluting our water system,” Friedman told Healthline. “Here’s the reality: UV radiation causes skin cancer. Plain and simple. WHO has designated it as a carcinogen. Sunscreens have years of evidence proving they can prevent skin cancer.”

Some of the myths Friedman says stop people using sunscreen include sunscreen preventing a “healthy glow” and that those with tanned complexions don’t need sunscreen.

Dr. Emily Newsom, a dermatologist at the University of California Los Angeles, says regardless of skin tone, sunscreen is critical.

“We don’t know for sure why, but in our culture, those who don’t burn easily tend to use less sunscreen because they don’t think they need it,” she told Healthline. “Sunscreen and sun protection is important for all skin types. Skin cancer is more common in those with light skin, but we still see skin cancer in all skin types.”

Watts says sun protection should always be used when the UV index is above three. But experts say sunscreen is not enough to provide protection.

“I would recommend wearing protective clothing such as a wide brim hat and long sleeves, seeking shade, and wearing a broad-spectrum sunscreen of at least SPF 30 on all exposed areas” Agbai said. “It is paramount to reapply the sunscreen every two hours while outside, or after sweating, swimming, or toweling off.”

The experts who spoke with Healthline all recommend getting into a daily routine of applying sunscreen and practicing sun safe habits. Even if, as a child, you weren’t sun-safe, they say it’s not too late to help your skin.