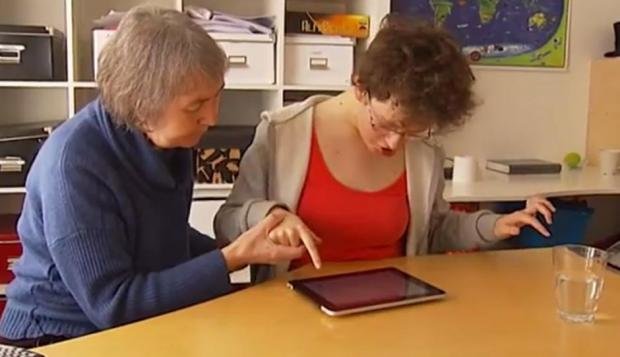 A new study into Ouija board practices revealed how the planchette (or a glass, as is often used) seemingly moves without any of the individual players being aware that they are doing it.

But beyond playing supernatural games, the new study shows how we can unconsciously create meaningful words and sentences, while being utterly convinced that it was not us doing it, but some other entity.

This conclusion has implications for a controversial method intended to help handicapped people or autism sufferers to communicate.

It is known as facilitated communication, whereby an assistant helps someone to communicate who would otherwise struggle alone. For example, by supported typing as shown in the video below.

Here, the assistant holds their hand, shoulder, or back, or provides some other form of guidance. The assistant catches tiny signals that help to direct their finger in the right direction, enabling them to type on a keyboard or a tablet.

Method shown not to work

A particularly shocking example of how facilitated communication can get things so wrong, occurred in the USA in 1992.

Janyce Boynton worked as a facilitator, helping Betsy, a student with severe autism. With Janyce’s help leading her arm and elbow, Betsy appeared to reveal that she had been abused by her parents. She and her brother were forcibly removed and the parents charged with abuse.

Before the case went to court, Janyce and Betsy were tested. Betsy was shown a picture of a simple object such as a banana, a shoe, or a ball, while Janyce was shown a different picture.

When asked what picture she had seen, Betsy did not once write the correct answer, corresponding to the picture that she had actually seen.

In another test, Betsy was taken away from Janyce and shown a key, which she was able to hold while the person conducting the test talked about keys. When Betsy came back to Janyce, she was asked to write what she had seen,

At this point, Janyce suspected that she might be steering the communication. She had no idea what Betsy had seen, and Betsy could not answer the question.

The testers held up the key in front of both Betsy and Janyce, and they asked Betsy again, what she had seen. The answer came quickly: A key.

Harms the very people it is meant to protect

Janyce had previously been completely convinced that facilitated communication was a door to a hidden mind. But this idea was shattered by the test results, she wrote in the journal Evidence-Based Communication Assessment and Intervention.

Everything that Betsy had revealed about sexual abuse was fabricated, unwittingly, by Janyce.

“I understand how difficult it may be for some facilitators to change their belief system. There is a lot at stake: people’s careers, reputations, connections with their family member or client. Nonetheless, I urge practicing facilitators to take a long, hard look at their own behavior. Voice doubts. Pursue testing outside the FC [facilitated communication] community,” wrote Janyce in 2012, 20 years after the charges against Betsy’s family were dropped.

She adds, “we cannot erase the damage we have caused by our actions, but we can take responsibility for our part in perpetuating the myth of FC. It is time to put a stop to this practice that adversely affects the very people we set out to protect.”

Research has shown precisely what Janyce experienced herself: That when autism patients communicate through facilitated communication, their responses are actually created by the facilitator.

A missing link in the puzzle

But Janyce’s experience is just one example of many, says psychologist, Professor James Todd from Eastern Michigan University, USA. He followed up on Janyce’s account, with an article of his own in the same journal.

Numerous scientific studies have shown that the facilitator directs the response, says Todd. For example, here, here, and here.

But no study had shown exactly how the facilitator was able to do this without being aware of it.

This is where the new study on Ouija boards may have some answers, says Todd.

“I would love to see a similar study done with FC , thus directly confirming the same kind of mistaken attributions that we have observed in facilitators, and what objective studies have tried to get at in other ways,” writes Todd in an email to our sister site, Videnskab.dk.

“Knowing how FC facilitators come to erroneously believe that they are not the authors of the output will help us understand how some of them come to create bizarre false allegations against innocent people, unconsciously typing things they might never ordinarily say or think,” writes Todd.

We overlook our own actions

Marc Andersen from Aarhus University, Denmark, and the lead-author of the Ouija board study, agrees that the new study may be able to shed light on some of the processes in facilitated communication.

He refers to another Ouija board experiment in which one person was blindfolded, and the second participant asked not to touch the planchette, unbeknown to the blindfolded player, who then conducted a Ouija board session, effectively, on their own.

The blindfolded player was easily able to move the planchette around the Ouija board. Afterwards, they reported that they had not moved the planchette, but had felt the other participant do it, who, remember, was not even touching the planchette.

Our brain underestimates us

The experiment shows how we can underestimate our own input, whether that be moving a planchette around a Ouija board or facilitating communication for a patient by helping them type.

“We also observe this effect in our new study: Even though both participants actively create the Ouija board responses through their shared interaction, the participants still usually underestimate just how large a contribution they actually make,” says Marc Andersen

He compares it to being at the cinema and getting irritated with the background noise of other people in the audience as they dig into their popcorn or candy. Meanwhile, we think we are being quiet as a mouse when we dig into our own bag for just a few seconds. This happens because the brain usually suppresses the sensory input that we ourselves create.

“Our natural proclivity to suppress the sensory inputs that are generated by our own actions could be part of the explanation of what goes wrong in facilitated communication,” says Andersen.