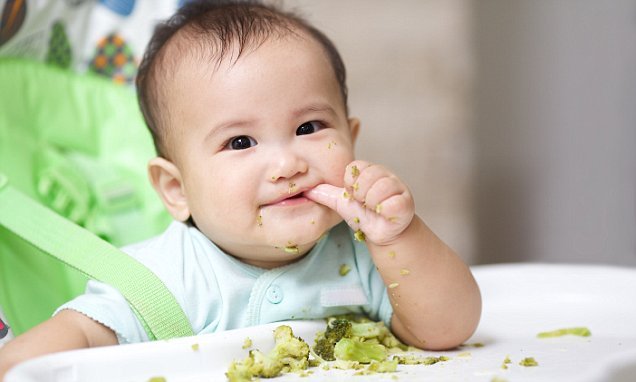 Babies should be fed solid food from just 3 MONTHS to improve their sleep and long-term health, major study concludes

Feeding babies solid food from the age of just three months old could help them sleep better and improve their long-term health, a major study has found.

The Government currently advises mothers to feed babies exclusively with breastmilk until they are at least six months, and only then gradually introduce solids.

But the new study suggests that advice is flawed – and suggests babies do better if solid food is given earlier, alongside breastmilk.

Experts believe the study – funded by official bodies including the Food Standards Agency and Medical Research Council – should lead to a change in infant feeding guidelines, which are due to be reissued next week.

But officials are understood to be reluctant to alter the advice – which is already ignored by the vast majority of parents.

Parents have been told for years to delay introducing solid food, mainly to encourage mothers to continue breastfeeding for as long as possible, but also because scientists thought food introduced earlier could lead to allergies. 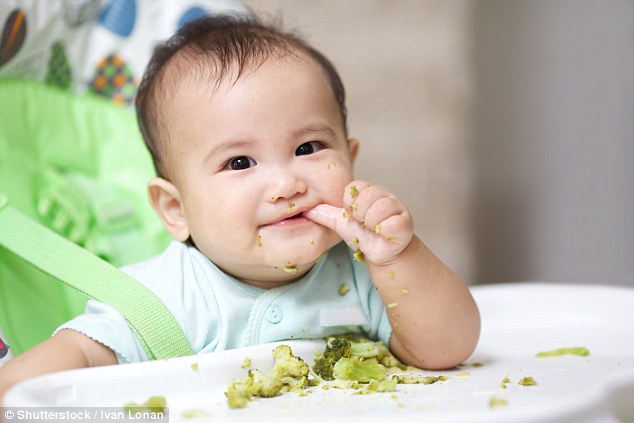 The Government currently advises mothers to only feed babies with breastmilk until they are at least six months, and then gradually introduce solids

However, most mothers in Britain already ignore this advice, with 75 per cent introducing solids before five months and 26 per cent saying they did so to stop their babies becoming hungry overnight.

The NHS Choices website claims this is a mistake – and solid foods will not make babies more likely to sleep through the night.

But the new study, by experts at King’s College London and St George’s University of London, found that in fact solid food increased sleep time and reduced the number of times a baby woke in the night.

The authors said improving sleep from an early age would help long term health, reducing risk of obesity and diabetes.

And the better babies sleep, the better their parents’ quality of life and mental health.

‘While the official guidance is that starting solid foods won’t make babies more likely to sleep through the night, this study suggests that this advice needs to be re-examined in light of the evidence we have gathered.’

Professor Lack stressed that mothers should continue to breastfeed their babies until they are at least six months, even if solids are introduced earlier.

And he said that some babies who frequently cough or splutter when drinking milk may struggle to eat solids – and for those children solids should not be introduced too early.

But he added: ‘For healthy, full-term babies who are feeding well at the breast there are no good reasons to delay the feeding of solids, as long as breast feeding continues.’

His team tracked 1,300 babies who had each been exlusively breastfed until three months.

Half of the babies were then gradually given solid foods, while the other half carried on with exclusive breastmilk diets until at least six months.

SHOULD A BABY’S FIRST FOOD BE MASHED BANANA OR RICE?

A baby’s first food should not be mashed banana or rice, with parents advised to wean their children on broccoli.

They said baby rice, chosen by more than half of parents, is too bland and a ‘missed opportunity’ to make them less fussy eaters.

Fruits such as mashed banana are feared to give a baby an early sweet tooth and make them less open to trying vegetables later on.

Dr Clare Llewellyn and Dr Hayley Syrad, who have researched baby eating habits for over a decade, said the first foods introduced to children at around six months should be bitter vegetables, as these are the foods most commonly disliked by children.

Those babies given solid foods slept for 16.6 minutes longer and woke 13 per cent less often in the night than those who were kept on just breastmilk.

The authors believe this is simply because those given solids did not wake up hungry in the night.

They also found these benefits were long lasting – with the babies who had started eating earlier still sleeping better at one year of age.

It comes after a milestone study by Professor Lack’s team two years ago found allergies are actually less likely if certain foods – particularly peanut butter – are given to babies from an early life.

That report knocked away one of the main justifications for delayed introduction of solids, and last year health authorities in the US changed their guidance by recommending the most at-risk children should be given peanuts as early as four months.

Professor Lack said decisions about whether to change the UK recommendations should stay in the hands of officials, but added: ‘Guidelines are already changing around the world.’

Fellow researcher Dr Michael Perkin, from St George’s University of London, said: ‘It is a commonly-held belief among mothers that introducing solids early will help babies sleep better, and our study supports this.

‘We found a small but significant increase in sleep duration and less frequent waking at night. Given that infant sleep directly affects parental quality of life, even a small improvement can have important benefits.’

Officials, however, insisted mothers should continue to follow the current advice until new guidance is published.

A Food Standards Agency spokesman said: ‘This further analysis … could be of interest to parents, however, there are limitations to the findings.

‘We are encouraging all women to stick to existing advice to exclusively breastfeed for around the first six months of age. If there is any doubt about what’s best for your baby, please seek advice from your doctor or health professional.’

Professor Mary Fewtrell of the Royal College of Paediatrics and Child Health said: ‘These are interesting findings from a large randomised controlled trial.

‘At the RCPCH, we recommend that mothers should be supported to breastfeed their healthy term infant exclusively for up to six months, with solid foods not introduced before four months.

‘However, the evidence base for the existing advice on exclusive breastfeeding is over ten years old, and is currently being reviewed in the UK by the Scientific Advisory Committee on Nutrition and in the EU by the European Food Safety Authority.

‘We expect to see updated recommendations on infant feeding in the not too distant future.’