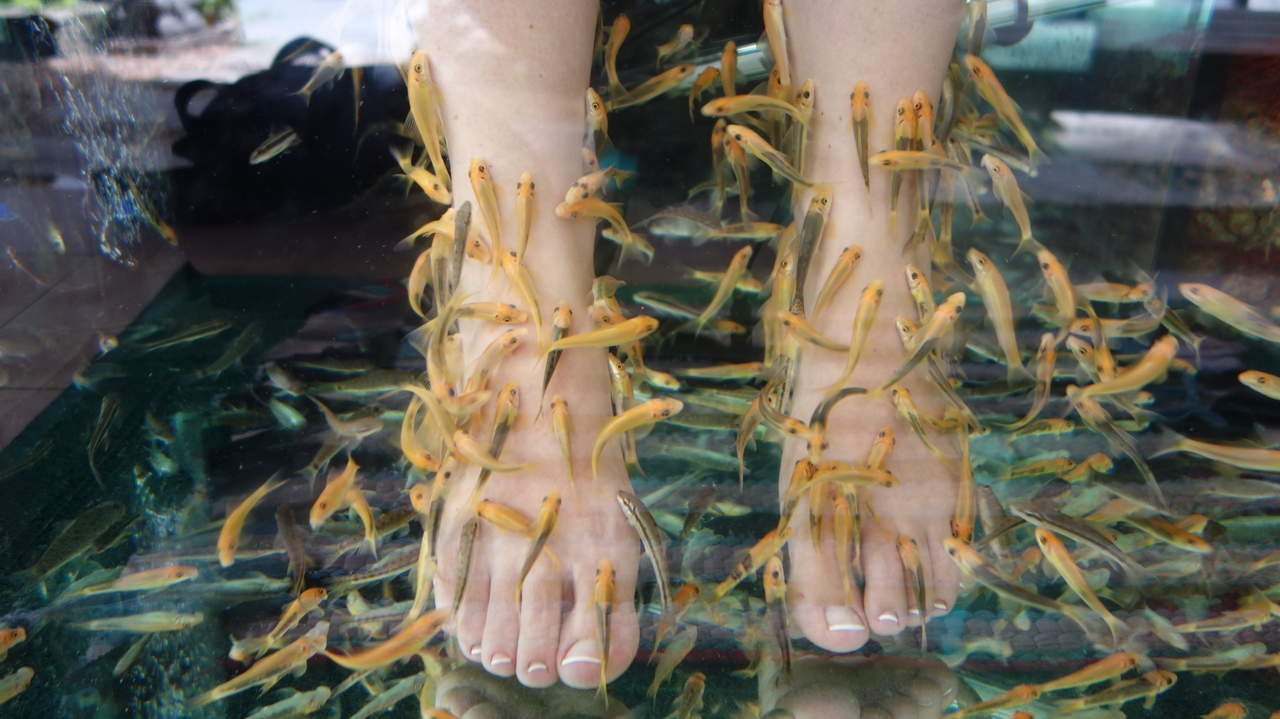 If you’ve ever thought about getting one of those exotic-sounding fish pedicures—a trendy spa practice in which tiny fish nibble at dead skin on your feet—here’s one reason you may want to reconsider: According to a case report in this week’s JAMA Dermatology, the practice likely caused one woman to develop a condition called onychomadesis, also known as toenail shedding.

The report describes a 20-something woman who visited her dermatologist after dealing with “abnormal toenails” for about six months. In technical terms, her proximal nail plates had separated from her distal nail plates on several toes; in other words, her toenails had stopped growing and were becoming detached from the skin underneath—a phenomenon described in the report as a “disappearing nail bed.”

Her symptoms were consistent with a diagnosis of onychomadesis, a condition that is often associated with major illness, infections, medications, hereditary conditions, and trauma to the feet and nails. When a person has onychomadesis, their nails become thin and brittle and begin to shed away, starting at the base.

The woman’s doctor, Shari Lipner, MD, assistant professor of dermatology at the New York-Presbyterian Hospital/Weill Cornell Medical Center, asked the woman about her diet, health, and lifestyle habits, looking for clues as to what may have caused this condition. “We went through common hobbies, occupation, travel, practices of wearing tight shoes, things like that,” Dr. Lipner tells Health.

Toenail shedding can be caused by frequent high-heel wearing, or by long-distance running or cycling in too-tight shoes. “But the patient denied all of those possible causes,” says Dr. Lipner. She’d also had no vaccinations or major illnesses and had taken no medications in the past year.

The only possible explanation, says Dr. Lipner, was a fish pedicure the patient said she’d had several months before her problems started. It’s possible—and, based on the process of elimination, very likely—that the trauma caused by fish biting around the nail area triggered a cessation in nail growth, Dr. Lipner concluded.

“We can time things pretty well, because we know that toenails on average grow only about one millimeter per month,” she says. “So we can trace back to a specific time when the trauma happened, and we think the fish pedicure is really the most likely reason this happened.”

Dr. Lipner had never heard of onychomadesis happening as a result of a fish pedicure. But even before this case, she would never recommend them. “One of the reasons I wrote the paper was not just to explain this specific nail problem, but also to give a little history about fish pedicures and their potential risks,” she says.

There have been several reports of people developing staphylococcus or myobacterium infections after getting fish pedicures, for starters. There have also been reports of spas using the wrong type of fish for these procedures—fish with actual teeth that can draw blood, according to the Centers for Disease Control and Prevention.

“Also, because the fish are reused from client to client, there’s always the risk of transmitting hepatitis and HIV,” says Dr. Lipner. “I think there’s really no good reason, medically or aesthetically, to get a fish pedicure.” She notes that the procedure has also been outlawed in at least 10 states and parts of Europe.

So why do people pay to let fish chow down on their feet? The procedure’s popularity is “likely due to unfounded claims that the treatment would leave feet smoother and smelling fresher, increase circulation, eliminate fungus and bacteria, and treat psoriasis and eczema,” Dr. Lipner wrote in her paper. While a few studies have suggested the therapy might be helpful for people with psoriasis, she says, there’s no evidence to support those other claims.

A board-certified dermatologist can do a much better job helping you with skin and nail problems than any spa procedure, Dr. Lipner adds—especially one that’s linked to these types of risks. Self-care can go a long way, too.

“A lot of women will cover up their nails by getting manicures and pedicures, but I think it’s really important to inspect your nails once a month to make sure they’re growing normally,” she says. “Make sure there’s no black lines, no red lines, no infections.”

If you do notice anything unusual about your nails, see a dermatologist. Nails should also be a part of every full-body skin examination at your dermatologist’s office as well, Dr. Lipner says, “so make sure you take off your nail polish before you have that appointment.”

As for the unfortunate patient mentioned in the case report? Luckily, toenail shedding isn’t permanent. While it’s likely that she eventually lost those damaged toenails, Dr. Lipner says, she should also grow new, healthy nails in their place.