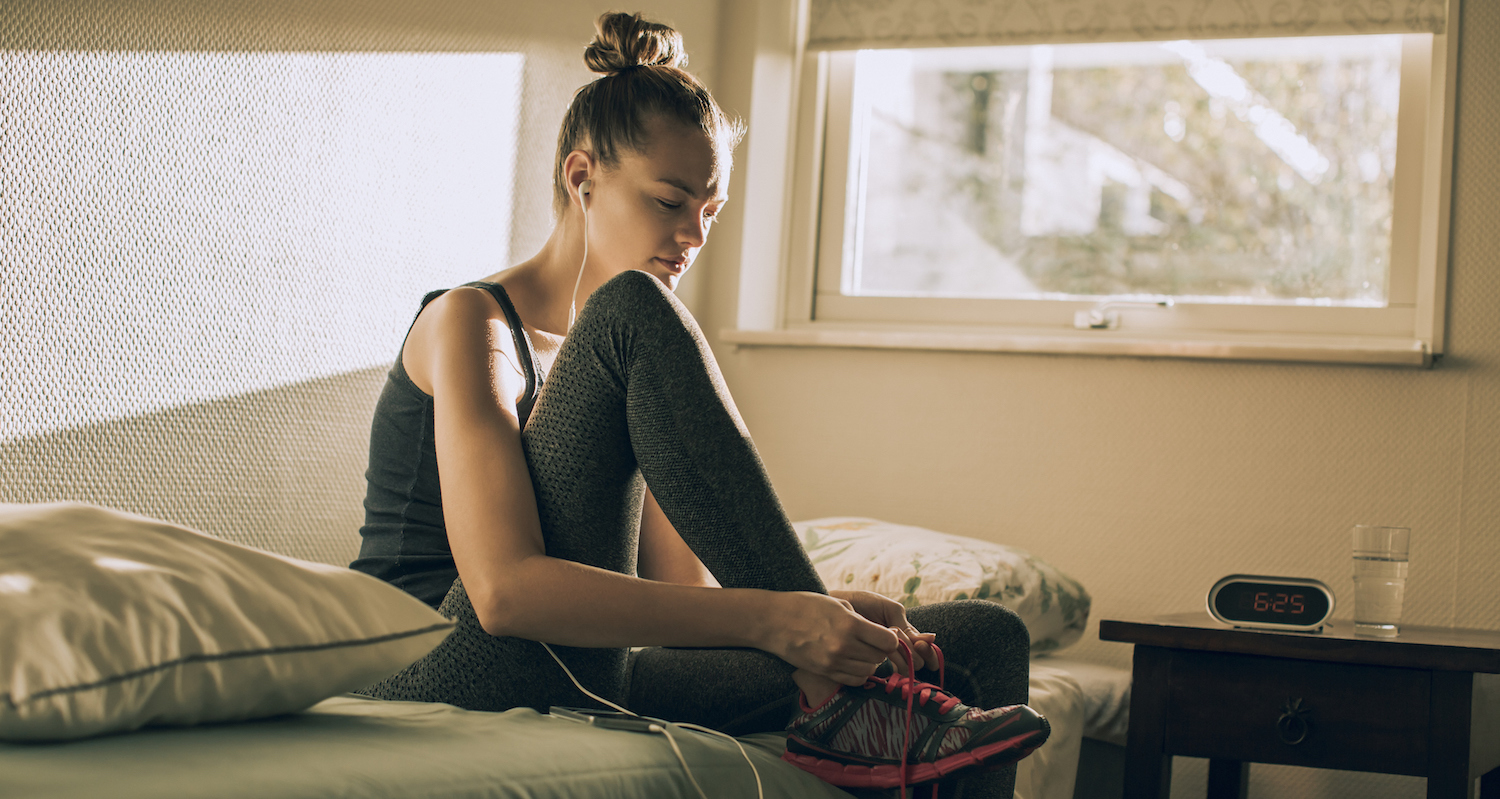 If you’re not a morning exerciser, it’s probably because you’re not a morning person. And that’s okay! Sleep is a good thing—until last-minute assignments, chores, happy hour, and all the other things that come out of nowhere start derailing your evening workout plans.

When that becomes the norm, working out in the morning can be the only option if you still want to make time to sweat. “But waking up early is so hard!” you might say. Okay, it is, but listen: Science says it takes 66 days to form a new habit, and that’s all you’re really doing—creating a new habit that’s going to help you live your life more productively.

Follow these tips from the trainers who make a living teaching early exercisers, and there’s no way you’ll still be hitting snooze in two months.

If you’re going to wake up at the crack of dawn to work out, giving yourself a good reason to do it could make it all feel a little easier, says Bethany Meyers, the founder of be.come and trainer at Studio B in New York City. “Make sure it has nothing to do with physical appearance, like, ‘I ate too much chocolate last night so I have to workout,’ because that’s a negative connotation and your morning workouts will feel like punishment!” she says. “Instead, think about how it will affect you and your life. Maybe it’s ‘so I can go home right after work and spend more time hugging my child’ or ‘I have a big meeting every Tuesday and a morning workout will make me feel strong and prepared.’” Whatever you decide, make your statement very clear, direct, and positive. Write it down and memorise it. “When your alarm goes off in the morning, say it five times and put your feet on the floor,” says Meyers. “The positive affirmation of how it will directly influence the success of your day will make your morning workouts seem like a privilege and not a chore.”

It’s way easier to follow through on something when it’s planned versus on the fly. “Book your workout in advance and put it in your calendar, just like you would a doctor’s appointment,” says Sydney Miller, an instructor at SoulCycle and SoulAnnex in NYC. “That way, it’s in your calendar in writing and you can start to think of it as part of your day. If you don’t sign up in advance, you’re way less likely to wake up early and get to a workout class spontaneously.”

3. CHOOSE A WORKOUT YOU ACTUALLY ENJOY

This sounds obvious, but so many people forget this when it coming to a.m. exercise—who wants to wake up for something they hate? “If you really despise a certain type of workout no matter how many times you’ve tried it, do something else,” says Emma Lovewell, an instructor at Peloton. “There are so many types of fitness classes out there, studios, gyms, classes, etc. Try them all until you find something that sticks. You have to like your workout enough to want to wake up early in the morning for it!”

Accountability is key to getting yourself out of bed early. “The best part about my 6 and 7 a.m. classes is the atmosphere and the loyalty they all have in their routine,” says CeCe Marizu, a group fitness manager at Equinox. “I like to think of the fitness club as the new club where you actually get to work on yourself, be a part of a strong community, and grow with people. Finding a workout buddy can make all the difference in your routine. Think about it: They’ll know if you skip a Monday.”

5. LAY YOUR OUTFIT OUT THE NIGHT BEFORE

This is such a small effort, and makes a world of a difference. Not only will you ensure you have all the gear you need (nothing like showing up at the gym at 6 a.m. without a sports bra…), but “doing this gives you a few more minutes of sleep than if you wait until the morning of,” says Danielle Devine-Baum, the creative director at Flywheel Sports. “Plus, there is nothing worse than skipping a workout and seeing your sad, unused workout clothes still waiting for you.”

Obviously, you should get to bed earlier if you want to get up earlier. So set yourself up for success: “Make sure your bed looks inviting to climb into, use soft lighting that adjusts your eyes to a darker setting and doesn’t spike your energy, stop eating two hours before bedtime, turn the TV and phone off at least an hour before bed, and set a 30-minute reminder of when to go to bed for a full eight hours of sleep,” says Rebecca Kennedy, the founder of A.C.C.E.S.S. She also recommends stretching before bed—not only will you get more restful sleep, but you’re less likely to wake up stiff.

There’s nothing quite like getting ripped out of sleep before the sun’s up by a shrill alarm. Instead, “set your phone alarm to any song that gets you pumped up and ready to go—the ‘Rocky’ theme is always a nice default,” says Sarah Wingo, an instructor at Pure Barre in Brooklyn.

8. MAKE YOURSELF PHYSICALLY GET UP

If you’re the type to hit snooze on repeat, trick yourself into physically getting out of bed. “When you set your alarm, don’t keep it so close that you can roll over and turn it off,” says Autumn Calabrese, a Beachbody super trainer. “Move it far enough away that you have to get up to turn it off, but close enough that you hear it.”

9. DON’T WAIT UNTIL THE LAST POSSIBLE SECOND TO GET OUT OF BED

Yes, you want to cram in as many precious minutes of sleep as possible. But “I like to get up at least 30 minutes before I need to,” says Lauren Duhamel, the founder of Legs by Lauren and an instructor at Studio B. “Instead of splashing cold water on my face like I did growing up, I keep sheet masks in my fridge—they’re so refreshing, and perfect for perking you up early!”

“Don’t spend any extra time on your hair and makeup in the early hours of the morning,” says Kara Liotta, the creative director for FlyBarre. “Use those extra minutes for sleep! Truthfully, if you are working out before the sun comes up, no one cares what you look like. They’re just impressed that you’re there.”

If you’re not a morning exerciser, don’t just jump into it cold turkey. “Set up incremental weekly move-ups of the wake-ups,” says Joe Holder, a Nike coach and trainer at S10 Training. “If your typical wake-up time is 8 a.m., move that up 15 minutes, then 30 minutes per week until you get to your desired wake-up time.” Don’t go crazy with your initial workouts, either. “Start with a 15-minute workout in the a.m. just to get used to moving that early,” then add on time, says Holder.

12. GIVE YOURSELF SOMETHING TO LOOK FORWARD TO

Some people need to be rewarded for waking up early, and that’s okay—extra motivation always helps! “Knowing that I have a good cup of coffee coming my way post-workout always makes mornings a little better,” says Christi Marraccini, the training manager at Tone House. “Maybe it’s treating yourself to a post-workout snack, or wearing new workout clothes. Getting into the routine is the hardest part, but allowing yourself something that puts a smile on your face helps!”

If you’re not a morning person, you are not going to become one magically overnight. “It’s a conscious change to your lifestyle you are choosing to make,” says Danielle Ortega, an instructor at FlyBarre. “It will be difficult at first, but once it becomes a routine, it will become your new norm. Trust me when I say it feels incredible to get your workout done early in the morning. When everyone else is waking up, you feel like a champion and have the rest of the day to be productive and achieve your goals!”

All those #fitstagrams are really just another way of staying accountable. “I’m a firm believer that ‘the world is watching’, so use it to your advantage!” says Vinnie Miliano, a coach at Mile High Run Club. And remember how you felt when you didn’t hit that early a.m. workout. “I always have a huge case of FOMO when I’m still laying in bed scrolling through my friends’ social and see they’ve already crushed a workout,” says Miliano.

This right here is the most important step. “The only way to create good habits is to create good habits,” says Lauren Porat, the owner of YogaSpark. “There’s no silver bullet. Eventually, your body will crave that a.m. workout and you’ll be grateful you invested in yourself in this way.”