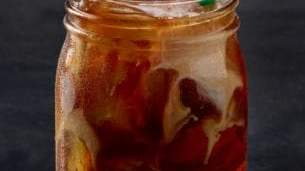 Starbucks just rolled out two new iced coffees: Iced Vanilla Bean Coconutmilk Latte and Salted Cream Cold Foam Cold Brew. Both promise to pack lots of flavor in each chilled refreshing sip, and the latte could be a game changer for people on dairy-free diets.

But don’t add these beverages to your next order just yet. While they sound delicious, we wanted to get a sense of how they stack up from a health perspective. So we asked two nutritionists to break down the ingredients and weigh in. Here’s what they have to say about these summery sips.

You might think that the coconut milk latte is the perfect new go-to for a dose of caffeine, but nutritionist Julie Upton, RD, isn’t so sure. While it might be appealing as a non-dairy option, a grande clocks in at around 140 calories, has a quarter of the recommended daily amount of saturated fat, and delivers five teaspoons of sugar. (Six teaspoons is the recommended limit for women per day, according to the American Heart Association.)

We have a new way to Latte! Introducing the Iced Vanilla Bean Coconutmilk Macchiato! This refreshing — and syrup- and dairy-free! — drink features vanilla bean powder and coconut milk shaken with ice and topped with shots of our Signature espresso. Cool, creamy, and super delicious and just in time for the hottest weeks of summer. Afternoon made. #vanillabeancoconutmilk #starbuckspartners #starbuckscoffee #coffeeaddict #d916 #baristalife #coffeelife #welovecoffee #needmorecaffeine #summerishere #afternoonmade #macchiato

“Thanks to the ‘vanilla bean’ flavoring that is mostly sugar and less vanilla bean,” she tells Health. “It also has no protein, thanks to the coconut milk.”

Cynthia Sass, MPH, RD and Health contributing nutrition editor, pointed out that one ingredient, carrageenan, may have inflammatory properties. “Carrageenan is an ingredient that can be derived from seaweed, but I bet you’ve never seen it sold at your local farmer’s market or supermarket,” Sass previously told Health. “And while it’s technically natural, its consumption has been tied to digestive problems and inflammation, a known trigger of premature aging and diseases, including obesity.”

Craving something similar with fewer calories and nutritional drawbacks? Upton suggests going for a grande iced coffee with nonfat milk. This order slashes calories and reduces your intake of added sugar.

A sprinkle of salt brings out the sweet. Introducing the new #SaltedCreamColdFoamColdBrew (?US and Canada)

Now about the second new drink, the salted cream. The health verdict is even worse for this one; Upton says it’s “more appropriate for a dessert than a coffee.” Each grande Salted Cream Cold Foam Cold Brew packs a gut-busting 230 calories, nearly half of the saturated fat you should consume in a day, and almost five teaspoons of sugar.

“Between the fat in the cream and the added sugars in the caramel syrup, this turns what should be a low-calorie pick-me-up into something more nutritionally similar to a cheesecake,” she comments.

While these new caffeine concoctions might go down like refreshing summer splurges, they’re not the best coffee drinks for your body. If you really want to make this season sweeter, stick with a morning coffee or tea with little to no added sugar.