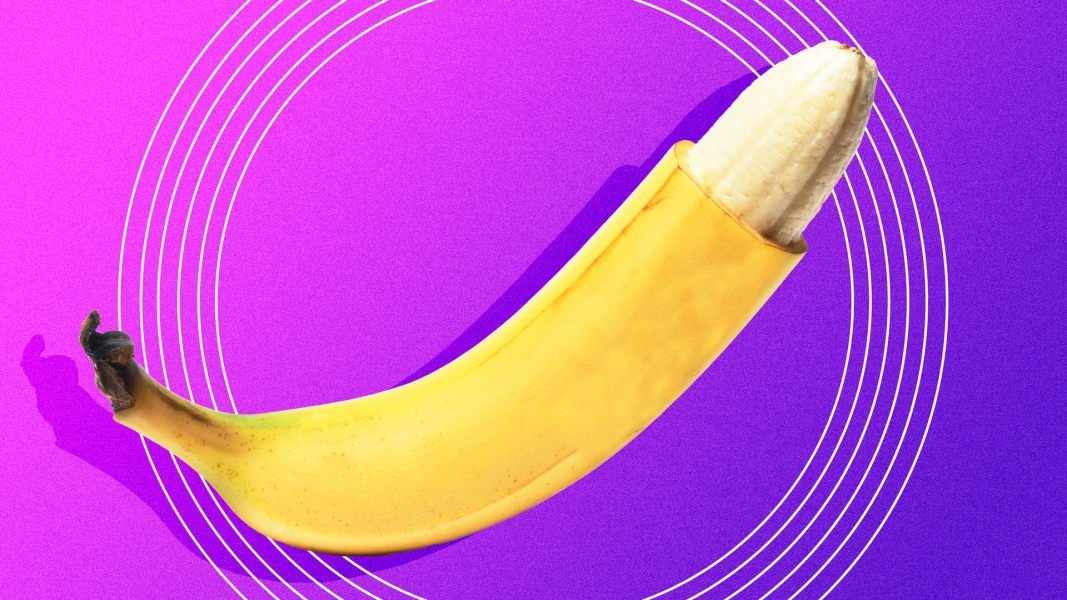 When I walk up to his truck, activist Anthony Losquadro is blue. No, he is literally blue. Nude except for a pair of speedo bathing trunks, Losquadro is getting his body painted in turquoise scales by a woman in a protective sun hat. We are at the 2018 Coney Island Mermaid Parade, an annual event in New York City, and Losquadro is there on business — specifically, the business of the foreskin. His organization, Intaction Inc. raises awareness about the supposed benefits of keeping the penile foreskin intact and ending the practice of neonatal circumcision. That’s right: He’s not just an activist, he’s an "intactivist."

I was surprised to see Losquadro’s Intaction-mobile at the Mermaid Parade, but I shouldn’t have been. Part live burlesque, part kids’ little league baseball parade, the event draws plenty of young parents and pro-nudity hedonists alike: aka the gooey core of the Venn diagram of people intactivists like Losquadro are hoping to reach.

Losquadro is a fit 53 years old, but looks younger. He has been an advocate for the right to what he calls "genital integrity" since 2010, but his curiosity about his own circumcision began long before that.

“When I was a young child and we went to Italy on a vacation, I would look at the statues and you see the statue of David by Michelangelo in Florence, and you wonder why things look different,” he said. “You’re like, ‘That’s not what a penis looks like.’”

The first time Losquadro saw an un-tampered-with penis with his own eyes was during his stint in the merchant marines. (His reaction: He averted his eyes and moved along.) But years later, with the dawning of the World Wide Web came more accessible information on circumcision and its history — as well as an opportunity to connect with like-minded people on the topic. And while anti-circumcision activism is not new, the movement seems to be maturing.

"Intactivism" has been around arguably as long as circumcision has, which is to say both practices date back millennia. Of course, members of the Muslim and Jewish faiths circumcise children with penises for religious reasons. And in the 1800s, Victorian Americans turned to circumcision as a supposed "cure" for masturbation — which at the time was itself considered to be a disease that was said to cause conditions such as epilepsy. Some folks wondered whether circumcision held the key to longevity (since Jewish people often lived long lives?). Skipping ahead to the late 20th century, circumcision became the de facto choice for parents in the United States. In the 1980s and ‘90s, some 60 percent of American newborns with penises were circumcised.

Intactivists like Losquadro say it’s time to find a better way. Or rather, to return to the original way.

“The foreskin has the four powers: pleasure, protection, lubrication and connection. It’s all the nerve endings in the foreskin. It feels better for both partners. It protects the end of the penis. It keeps it from getting dried out, like an eyelid. It’s a connection between people,” Losquadro says. (He waxes a little spiritual on this last point for my taste, but I digress.) “Most of the world is intact, and there’s no reason we should be doing this," he adds, "this" being routine circumcision.

Indeed, a 2016 analysis of population data estimated that 37 to 39 percent of penis-bearers the world over are circumcised. Australia’s circumcision rate, for example, is just 26.6 percent, and in countries like the Netherlands, Denmark, Sweden, Greece and Italy, less than 6 percent of penises are cut. And yet according to that study, the circumcision rate in the United States is still quite high: about 71 percent. And it seems to be remaining popular simply because, well, it’s popular — and Americans want to fit in.

"Growing up, I was nervous about having sex because uncircumcised penises aren’t the norm in America; they have a terrible rep with American girls,” explains 23-year-old Christopher* of his decision to get circumcised as an adult a couple of years ago. But his choice wasn’t just about cosmetics: “I did it because my frenulum tore and my penis was bleeding profusely while having sex… But honestly, now the adult circumcision saga is a fun story I get to tell people — so I feel like I wouldn’t have it any other way."

In Christopher’s and my lifetime, studies and reports from reputable global scientific bodies such as the World Health Organization and the Joint United Nations Program on HIV/AIDS have loudly touted the public health benefits of voluntary circumcision. But those studies, many of which were limited in scope and conducted only in Africa, show just correlation (not causation) between circumcision and lower rates of HIV infection and reduced occurrence of urinary tract infections.

“The literature out there on circumcision — over, over and over again — says that it doesn’t help anything whatsoever,” said Lauren Sardi, a professor of sociology at Quinnipiac University who specializes in body modification and neonatal circumcision.

Sardi says she often agrees with pro-foreskin activists’ opinions — but not always their tactics. “They tend to use discourse and not understand the loaded messages behind their discourse, or they fully understand it and they don’t care,” Sardi said. “If your goal is to educate prospective parents about the actual very real information that is out there, calling them ‘mutilators’ is not going to help your cause.”

For expectant parents, making an informed decision about their newborn baby and that baby’s foreskin can be a challenge. On one hand, you’re facing an elective surgery in which your tiny baby is injected with lidocaine and strapped down so that his foreskin can be stretched up, put in a clamp and then cut off. On the other hand, you have supposedly reduced risks of potentially deadly infections such as HIV — as well as a penis that is, by American (especially white Christian American) standards, deemed aesthetically pleasing and “normal.”

Emily Lesserman and Courtney Ewell Marshall are two friends who grappled individually with whether to circumcise their own children. After much discussion and research, each came to a different decision.

“We thought it was important to have a likeness to his father,” says Lesserman, who ultimately opted to have her child circumcised. Lesserman was aware of the potential health benefits, but mostly, she says, for people of her generation — including her husband — it was just “what was done.”

“That may seem ignorant and it probably is," she continues, "but if we’re going to put it in a particular box, it came down to cosmetics.”

From the same starting point, Ewell Marshall came to the opposite conclusion. “I couldn’t find any good reason to circumcise him; I’m just this side of granola as far as parenting goes,” she laughs. She explains that if her child wants to have a circumcision down the line, he, like Christopher, has the option — and can make the decision himself. “My kids are vaccinated and everything, but I’m big on the bodily autonomy," Ewell Marshall adds.

This, in the eyes of intactivists like Anthony Losquadro, is a success story. And these days, Losquadro is keeping things positive. “I give a presentation about being foreskin-positive,” he says. “There’s enough problems in the world, [so] instead of saying, ‘I’m a victim; you’re mutilating them,’ let’s talk about the benefits of foreskin.”

After a long pause, he adds, “I don’t even want to talk about circumcision.”

*Name has been changed.