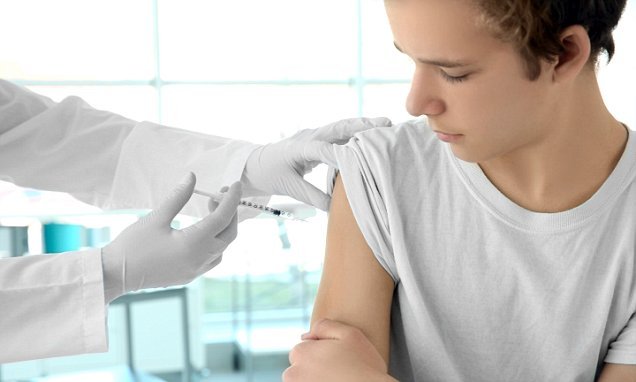 Teenage boys in England will be vaccinated against HPV, health minister Steve Brine has announced.

This comes after a well placed source told The Mail on Sunday, which has long campaigned for the move, last week to expect such an announcement within the next few days.

A decade after the jab was made available to girls on the NHS, Scotland and Wales announced they were acting on The Joint Committee on Vaccination and Immunisation’s (JCVI) claims that inoculating young male teens is cost effective.

The Department of Health and Social Care initially sparked fears England would not be following suit when it said it was only ‘considering’ the committee’s advice.

Girls have been prioritised due to HPV causing cervical cancer, which kills approximately 1,000 women a year, while around 500 women also die from other HPV-related cancers.

Yet the virus is now known to cause approximately 2,000 male cancers annually, resulting in the deaths of about 650 men a year, mainly from mouth and throat forms of the disease.

HPV is the most common sexually transmitted infection in the US and the UK with an estimated 14 million Americans and a third of British adults being infected every year. 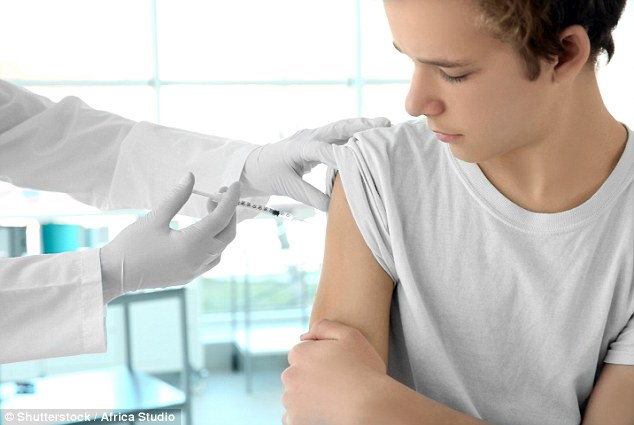 Teenage boys in England will be vaccinated against HPV, health minister announced (stock)

‘As a father to a son, I understand the relief this will bring to parents’

Brine said: ‘The HPV vaccine for girls is already expected to save hundreds of lives every year and I am delighted that we will now be protecting even more people from this devastating disease by extending the vaccines to boys.

‘Any vaccination programme must be firmly grounded in evidence to ensure that we can get the best outcomes for patients, but as a father to a son, I understand the relief that this will bring to parents.

‘We are committed to leading a world class vaccination programme and achieving some of the best cancer outcomes in the world – I am confident these measures today will bring us one step further to achieving this goal.’

‘Almost all women under 25 have had the HPV vaccine and we’re confident that we will see a similarly high uptake in boys.

‘This extended programme offers us the opportunity to make HPV-related diseases a thing of the past and build on the success of the girls’ programme, which has already reduced the prevalence of HPV 16 and 18, the main cancer-causing types, by over 80 per cent.

‘We can now be even more confident that we will reduce cervical and other cancers in both men and women in the future.’

IS THE HPV JAB SAFE? HOW THE CONTROVERSY HAS LED TO A DROP IN VACCINATION RATES

WHO IS GIVEN THE JAB?

All girls aged between 12 and 18 are are offered a free vaccination against HPV by the NHS to help protect them against cervical cancer under a programme launched by UK health officials in 2008. However, boys aren’t given the jab.

In the US, the CDC recommends for all children to receive the vaccine, which was approved by the FDA in 2010, between the ages of nine and 12. Catch-up jabs are then available for men up to the age of 21 and women up to 26.

It’s estimated that about 400 lives could be saved every year in the UK as a result of vaccinating girls – while around 30,000 cases of cancer could be avoided in the US each year with the jab, according to figures.

However, a wave of allegations over the controversial HPV jab has caused vaccine rates to plummet to as low as 1 per cent in some countries.

Anti-vaccine campaigners have the slump, which has badly affected Japan, which had a vaccine rate of 70 per cent just four years ago.

They have posted hundreds of unsourced videos online featuring girls in wheelchairs that they claim have been disabled by the jab.

The downturn in vaccination rates came after an allegedly fake study on mice linked the vaccine to neurological issues.

However, the world’s leading health officials have repeatedly slammed anti-vaxxers for ‘promoting pseudoscience’.

Government authorities agree there is no evidence to support a link between HPV vaccination and chronic illnesses.

They concluded there is ‘no credible evidence of a link between the HPV vaccine and a range of chronic illnesses’.

They warn the vaccine has been proven to be safe in more than 10 years of studies, and it is essential for preventing dozens of HPV-linked cancers.

And last year, the revered John Maddox prize for ‘sense about science’ was awarded to a Japanese researcher who debunked the jab claims.

HOW MANY SIDE EFFECTS HAVE THERE BEEN?

English health officials received 3,972 ‘yellow cards’ – warnings of side effects – between 2010 and 2013 for the controversial HPV jab Gardasil.

In Europe, 11,867 reactions to Gardasil have been recorded up to February 2017, according to The European Medicines Agency.

Many report symptoms of chronic fatigue syndrome, and cases of girls being left paralysed are rare. Fatalities have occurred, reports also showed.

‘This will save lives – no question’

Boys are expected to receive the Gardasil vaccine, as girls do. This protects against two HPV strains that cause cancer and two others that result in genital warts.

Professor Margaret Stanley, incoming president of the International Papillomavirus Society, said: ‘This will save lives – no question.’

Tristan Almada, founder of the NOMAN is an Island: Race to End HPV campaign, added the decision is ‘the biggest opportunity to prevent cancer in decades’.

Although officials have not announced when an HPV vaccination programme will be rolled out for teenage boys, HPV Action believes it is ‘entirely realistic’ for it to begin by September 2019 at the latest.

Professor Peter Openshaw, president of the British Society for Immunology, said: ‘The Department of Health and Social Care now need to work with vaccine manufacturers to ensure that a national rollout of this vaccine to boys can begin as soon as possible.

‘Alongside the rollout, it’s also crucial that we redouble efforts to actively communicate the important health benefits of this vaccine to parents and children.

WHAT IS HPV? THE INFECTION LINKED TO 99% OF CERVICAL CANCER CASES

Human papilloma virus (HPV) is the name for a group of viruses that affect your skin and the moist membranes lining your body.

Up to eight out of 10 people will be infected with the virus at some point in their lives.

There are more than 100 types of HPV. Around 30 of which can affect the genital area. Genital HPV infections are common and highly contagious.

Many people never show symptoms, as they can arise years after infection, and the majority of cases go away without treatment.

It can lead to genital warts, and is also known to cause cervical cancer by creating an abnormal tissue growth.

Annually, an average of 38,000 cases of HPV-related cancers are diagnosed in the US, 3,100 cases of cervical cancer in the UK and around 2,000 other cancers in men.

HPV can also cause cancers of the throat, neck, tongue, tonsils, vulva, vagina, penis or anus. It can take years for cancer to develop.

The JCVI previously claimed it was ‘overwhelmingly’ unlikely that vaccinating boys would be cost-effective.

Its conclusions were based, in part, on a flawed computer model that wrongly assumed HPV caused relatively few cancers in men.

The body also reasoned the vast majority of young men would be protected as a result of vaccinating girls.

Professor Margaret Stanley, research visitor at the University of Cambridge, said: ‘Immunising men (the other 50 per cent of the population) gives additional protection to women – after all it takes two to tango.’

Earlier this month the committee accepted new evidence that HPV causes many more cancers in men than previously thought.

In particular, it causes up to five times as many mouth and throat cancers as had been estimated.

At a meeting in June, the JCVI subsequently switched its advice to conclude that vaccinating boys may well be cost-effective, The Mail On Sunday learned. It released a statement confirming this recommendation last week.

Dr David Elliman, a consultant in Community Child Health, said: ‘The decision to role out the HPV vaccine to boys is to be welcomed.

‘The JCVI agreed that it would undoubtedly be of benefit, but were constrained by the rules of cost effectiveness modelling. Now boys will also be able to benefit from the vaccine in the same way that girls have.’