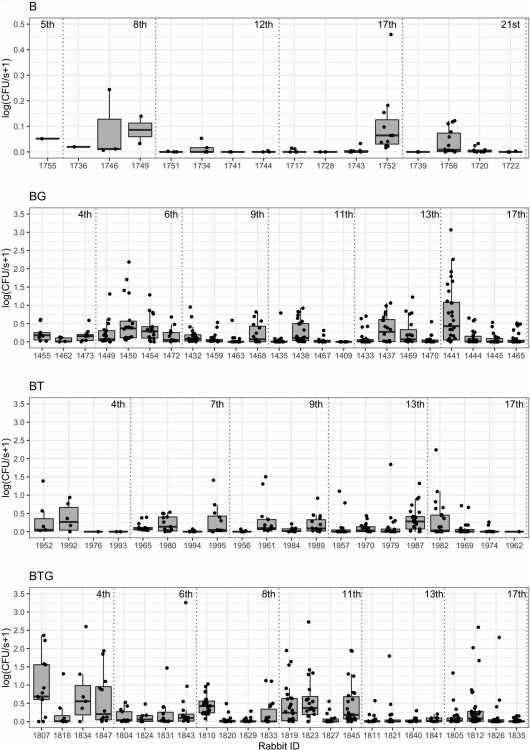 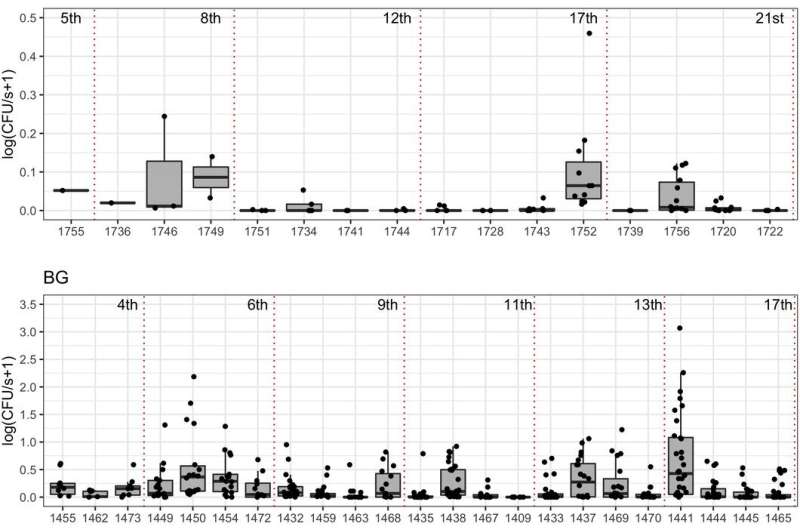 Rabbits co-infected with a respiratory bacterial infection and one or more gut helminth parasites are more likely to shed bacteria that can infect others, according to a report led by researchers at Penn State and published today in eLife.

The study suggests that co-infection is an important source of variation in pathogen shedding between individual animals and could influence how likely a disease is to spread. Species similar to the ones used in this study infect humans and while the study was done in rabbits it has broad implications for human populations.

Individual variation in pathogen transmission can increase the basic reproduction number—the R value—of a pathogen, and determine whether an infection will spread or stutter and quickly fade away. One of the causes of this variation is differences in the amount and duration of pathogen shedding, as some individuals shed more and for longer than others—so-called super-shedders. Co-infection with other pathogens is thought to contribute to variation in host infection, and so transmission, because of interactions between pathogen species and the immune response they trigger.

“There is increasing evidence that gastrointestinal helminths can impact the severity and time course of respiratory infections, but how they affect the dynamics of shedding remains to be determined,” explains senior author Isabella Cattadori, Professor of Biology at the Center for Infectious Disease Dynamics, Penn State, US. “This is important in regions where chronic helminth infections co-circulate with respiratory pathogens that are endemic or cause seasonal outbreaks, and where antimicrobial resistance is emerging as a threat. Focusing on the treatment of helminths could be a rapid and effective way to reduce onward transmission.”

First, they measured the number of bacteria shed for each type of infection, by counting how many colonies grew on a petri dish exposed to a rabbit. For each rabbit they also quantified a number of immune variables in the blood. Then, they developed a mathematical model to simulate the immune responses of the rabbits to the four types of infection, and how it affected the extent and timing of bacterial shedding.

They found considerable variation in the level of shedding within and between the four types of infection. Some rabbits consistently shed large amounts of bacteria, while others were low shedders or did not shed at all.

The rabbits carrying all three pathogens showed the highest variation in shedding; indeed, the presence of helminths increased variation both in the magnitude of shedding and how often bacteria were shed. Together, this suggests that co-infections with helminths, irrespective of the species, would lead to a higher probability of onward transmission of B. bronchiseptica.

To study whether B. bronchiseptica shedding was influenced by the intensity of infection in the respiratory tract and the host’s immune response, the team built a dynamical model. For each rabbit, they linked the experimental shedding data to the estimated intensity of infection of B. bronchiseptica and the related immune response, where parasites altered the strength and duration of this response.

These simulations confirmed that bacterial shedding reached higher levels and lasted longer in co-infected hosts, and that these changes were linked to the significant growth of B. bronchiseptica in the respiratory tract. Changes in relative contributions of immune cells called neutrophils and antibodies could explain these infection dynamics, and the differences in patterns of shedding between types of infections.

However, the rapid changes in the magnitude of shedding commonly observed in the majority of rabbits could not be explained by the intensity of infection or the associated immune response studied here at the individual level, suggesting that localized processes in the respiratory tract may be more important .

“Our study adds novel insights into the role that gastrointestinal helminths play in the dynamics of bacterial shedding. Given that helminth infections affect one quarter of the global human population and respiratory infections are among the top ten causes of death by infectious diseases worldwide, understanding the role of helminths in respiratory infection dynamics is important for developing treatments targeted to specific co-infection settings,” concludes Cattadori.

“The ability to detect and quarantine high shedders and super-shedders is crucial for lowering the risk of disease outbreak, and focusing on the treatment of helminths could be a rapid and effective way to reduce onward transmission.”