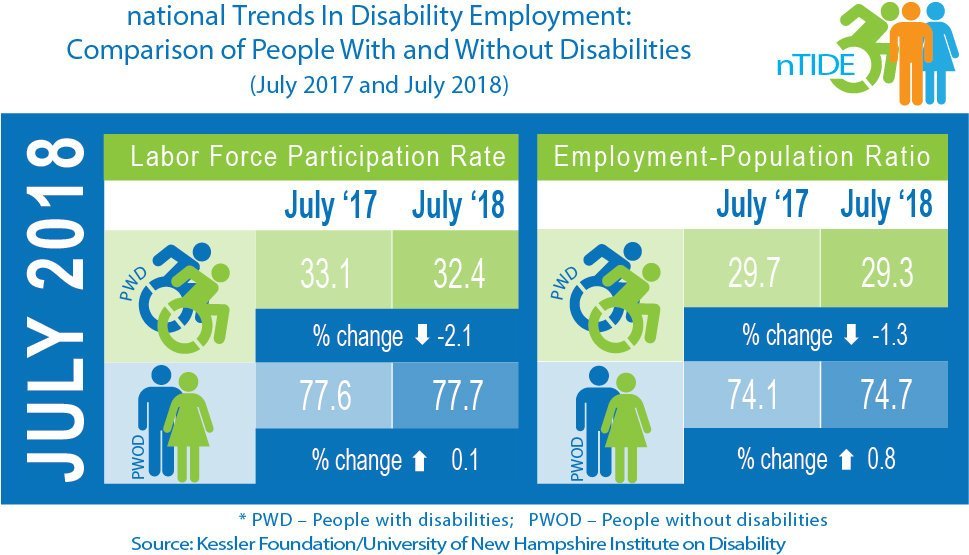 Job numbers declined again for Americans with Disabilities last month, according to today’s National Trends in Disability Employment—Monthly Update (nTIDE), issued by Kessler Foundation and the University of New Hampshire’s Institute on Disability (UNH-IOD). Despite the second month of downturns, experts remain optimistic about future job gains as the labor market continues to tighten.

Accommodations are an important factor in the successful hiring of people with disabilities, and in the retention of employees who develop new disabilities. Employers that are open to providing accommodations and have the capability to provide them, will have greater success in meeting their need for staffing.

“From February 2016 until May 2018, we saw steady improvement in the employment situation for people with disabilities. However, for the past two months, we have seen slight declines in their employment-to-population ratio and labor force participation rate,” according to John O’Neill, Ph.D., director of employment and disability research at Kessler Foundation. “This downturn is disappointing, but given the tight labor market, we may yet see further improvement for Americans with disabilities.”

“It is certainly disappointing to see the labor force participation rate of people with disabilities declining, compared to the same time last year, especially since the economy has been doing so well,” said Andrew Houtenville, Ph.D., associate professor of economics at UNH and research director of the Institute on Disability. “Of course, two months do not imply a trend, so we will be watching this closely in the coming months.”

Working-age people who sustain a disabling illness or injury face major decisions about staying in their jobs or returning to the workforce after treatment and/or rehabilitation. The availability of accommodations may be a major influence in their decision to return to their current job or seek new employment. In 2017, Kessler Foundation released survey findings that revealed useful data about workplace practices for accommodating employees with disabilities.

According to the Kessler Foundation National Employment and Disability Survey: Supervisor Perspectives, 66 percent of employers have implemented a process to provide requested accommodations. Of the 3,000 supervisors surveyed, 96 percent found these processes effective, according to Dr. O’Neill, a survey co-author. “The 34 percent of employers who lack an accommodations process clearly have an opportunity to improve their hiring and retention of people with disabilities by implementing a process for requesting accommodations,” he noted. The majority of supervisors (96 percent) also responded favorably to having access to a centralized accommodations fund to help them provide requested accommodations. Only a small percentage of employers—16 percent—have such funds, however. “This highlights another opportunity for the majority of employers,” Dr. O’Neill emphasized. “Setting up such a fund would facilitate the provision of accommodations, and help supervisors keep employees in their jobs.”