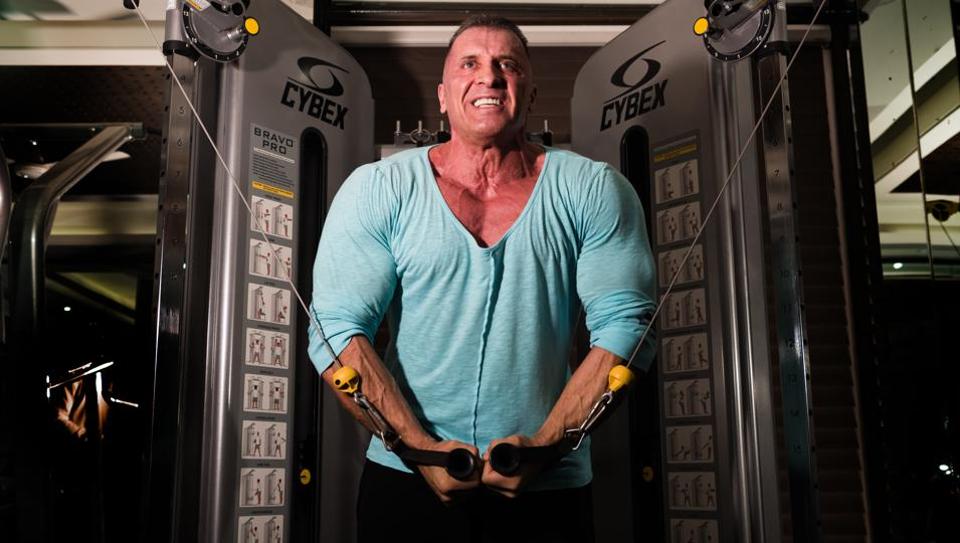 Serbian bodybuilder Milos Sarcev, who won Mr Yugoslavia and Mr Universe in 1989, is known as The Mind for his innovative techniques and theories in the bodybuilding industry. Recently, we caught up with him during his trip to India. The journey of this muscle man is as intriguing as his start; take a look.

I grew up in a very small city of Serbia. I had limited opportunities. As a child of two doctors, I was encouraged to study, so I became an academic. [At the same time], my father always encouraged me to be physically active — I played soccer and basketball when I was young. Soon, I started lifting weights and realised that I wanted to push my physical development as far as possible, and become the first Serbian to win the World Bodybuilding Championships.

Milos Sarcev’s first international contest was in Italy, in 1987 where Milos came second. He won the Mr Universe title in 1989. In 1991, he turned into a professional bodybuilder. He secured the third place in San Jose IFBB Pro Invitational contest, which made him eligible for the 1991 Mr Olympia. Milos has managed to qualify for Mr Olympia for ten consecutive times, a task very few bodybuilders have accomplished. He also broke the World Record for the number of competitions entered — 72 in 10 years.

The word supplement means a substance that can be taken to remedy person’s deficiencies in their daily nutritional diet. However, due to wrong assumptions, and lack of education, most people believe that supplements are dangerous unnatural chemicals. The truth is exactly the opposite. The correct way to use them is to know what nutrients person is lacking in their daily diet. Also, keep in mind that there is difference between anabolic steroids (hormonal products) and nutritional supplements (natural products, allowed by World Anti-Doping Agency).

Now, millions of people around the world have daily access to a myriad of pictures and videos of physically-fit people. And it’s just a natural reaction that some of them will realise that they, too, desire to look that way. There is no man on this earth that can convince me that they would rather be skinny, fat, weak or out of shape, rather than strong, shapely and muscular.

For women, it’s a little different, as some would just want to stay strictly feminine believing that any muscle tone would bring out masculinity while others find strong and shapely very sexy and attractive. Either way, ladies are starting to be involved in fitness, and I believe social media have a lot to do with it.

I’ve recently watched the Baahubali series and was impressed with the physiques of two leading actors Prabhas and Rana Daggubati. Of course, being a coach and a trainer, I know that I could get them in even more spectacular shape as my job is to prepare the very best in the world. Those two gentlemen have incredible genetics and a natural structure and it would be very easy taking them to another level.

Speaking of that, one of my clients few of years ago was Rakesh Udiyar, who I believe is one of personal trainers in the team of Bollywood superstars Aamir Khan and Salman Khan. Aamir really impressed me in his movie Dangal (2016) and Salman in Sultan (2016).

I would say, dream big, set your goals high, educate yourself about every aspect that can bring you results.

When I told my countrymen that I would go to America, win Mr Universe and compete at Mr Olympia, I was the laughing stock of the nation. Everyone discouraged me.

Well, difficult never meant impossible. All those who were once making fun of me became my biggest supporters after I became one of the world’s best bodybuilders.

My father always talked about India and one of the first books he made me read was the autobiography of Mahatma Gandhi. First thing I did when I came to India was that I asked my dear friend Manish Talreja to take me to National Gandhi Museum. He took me to see Taj Mahal on my first trip and few days ago we visited Mumbai. My favourite Indian dish is chicken biryani. I find Indian people very humble, welcoming, hard-working and extremely intelligent. As I mentioned, my dear friend Manish Talreja is one of the most brilliant men I’ve ever met. He is true bodybuilding enthusiast who has impressed me with his sheer knowledge of every aspect of fitness and bodybuilding.

It’s because of him and our numerous conversations— I decided to India (third time in last two years) and now, we both have decided to contribute to the Indian community as much as we can.