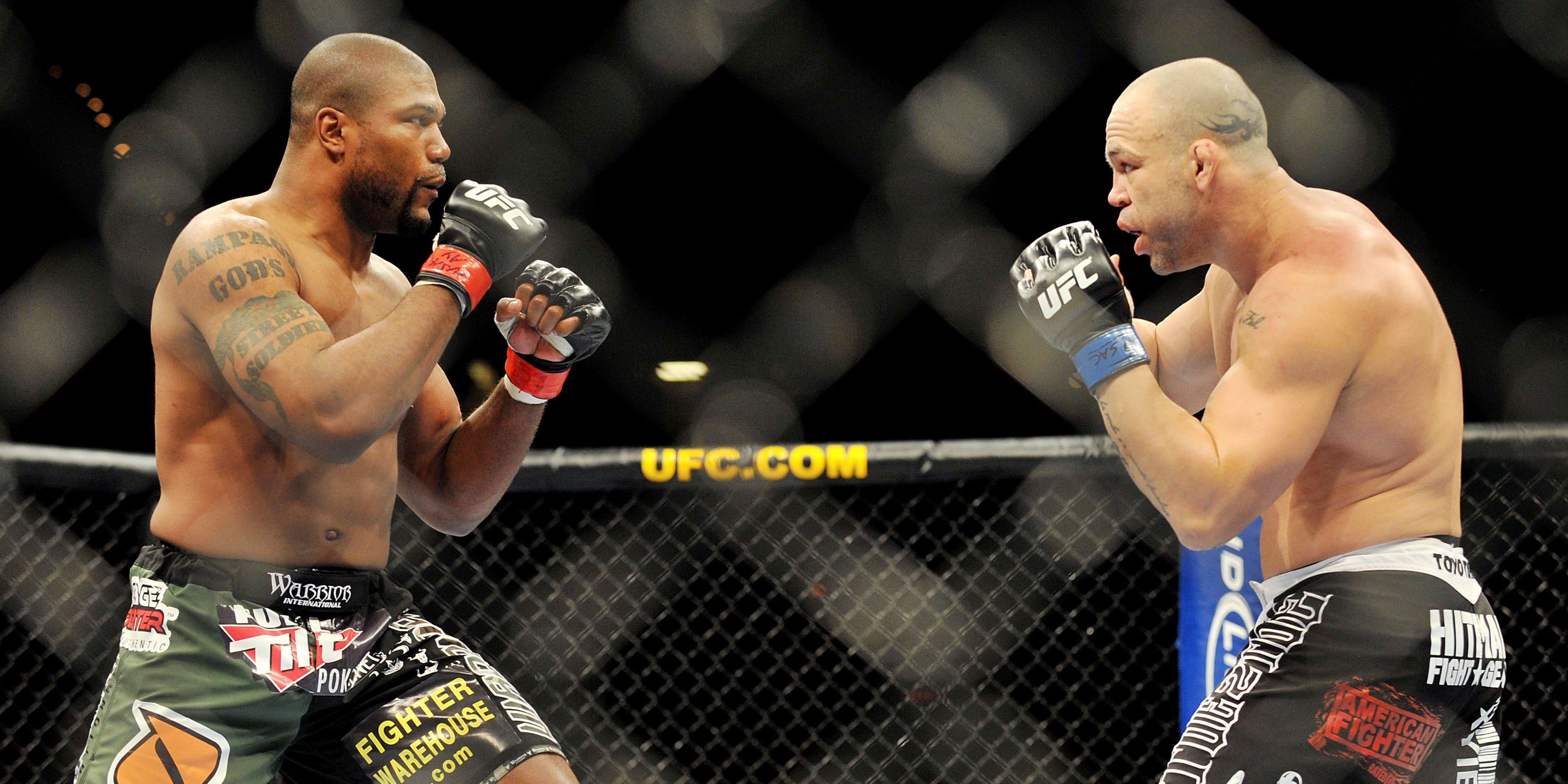 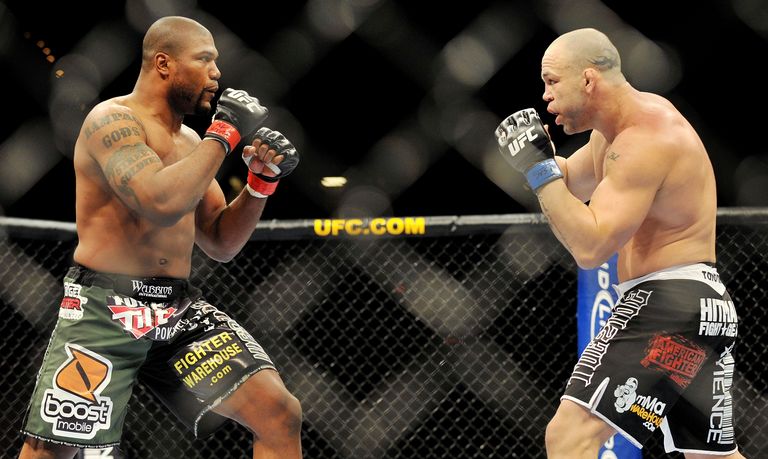 You could say that Quinton “Rampage” Jackson and Wanderlei Silva, two fighting legends, are well acquainted.

The two have one of the premier rivalries in all of mixed martial arts (MMA), with their heated feud dating back to 15 years ago and stretching across three fights across just as many promotions.

Silva used a barrage of knee strikes to win the first two fights by technical knockout (TKO) in November 2003 and knockout (KO) in October 2004, before Jackson landed a vicious left hook to put his rival to sleep in December 2008.

Now, as the legendary fighters signed to Bellator MMA prepare to clash again after nearly a decade for perhaps final time on September 29, each combatant isn’t simply vowing another violent victory. They’re also jabbing each other’s level of fitness as part of their trash talk.

The pair spoke to Menshealth.com in New York City on Tuesday after Bellator held an event to announce that it signed a nine-figure, multi-year deal with the live sports streaming subscription service, DAZN. That partnership will have DAZN streaming 22 annual Bellator events, beginning with the Jackson-Silva mega bout headlining the Sept. 29 card at the SAP Center in San Jose, California. (Think of DAZN it as the Netflix for sports, although the company’s CEO, James Rushton, hasn’t divulged a monthly price just yet. Still, it’s enough for the UFC to definitely raise an eyebrow).

“I’ll use my speed because a guy big like that can’t be fast… and he can’t fight so long,” Silva, 41, told Menshealth.com at the event. “My conditioning and speed will be good ways to win this fight.”

“He’s not going to be as fast as he used to,” Jackson said in response. “I’m not too worried about his speed. Plus, if he would try to up his speed, it would make him gas out. With age, your speed is the first thing to go. Power is the last thing to go. I still have power.”

But Jackson (37-13 with 16 KOs and 7 submissions) and Silva (35-13 with 25 KOs and 3 submissions) are far more than just trash talkers. We asked the fighters their go-to exercises that they’ll use in their training camps to improve their strength and conditioning, and how these moves correlate directly into the cage during a fight.

What’s best is all of these exercises are basic. The volume of reps attached to them, however… well, good luck with them, because you might have to tap out before you can finish. With that in mind, be sure to adjust the workouts to your own fitness level. Push yourself, but don’t overextend and put yourself in danger. Work up to the full number of reps over time.

Try out some of these exercises in the gym, and you’ll have an idea of how tough it is to actually train for an MMA bout — minus the actual practice of martial arts techniques and sparring, of course. For that, find yourself a good coach and hit the mats hard.

Jackson says he feels like he has the power to knock his sparring opponents out every time he does jump squats as part of his training camp. “A lot of people don’t know this, but most of your punching power comes from your legs. See, my legs are really big,” Jackson said, as he slapped his trunk-like quads. “Jump squats are key.”

Jackson said he stayed away from the exercise during the last few years to keep his knees fresh, but can’t afford to avoid them while training against a powerful heavyweight such as Silva. Jackson recommends starting out by doing three sets of 10 reps and working up to the point where you’re doing 30 reps.

Fighting professionally for 18 years has made the 40-year-old Jackson smarter about his training. Over time, “Rampage” has learned that he can’t do without basic moves like pushups. He does a ton of them, logging anywhere from 100 to 200 per session in 25-rep installments. Jackson has found them useful for giving him strength towards the end of fights. “It’s really important to lift your own body weight for some reason,” Jackson says. “You want to have that conditioning strength to where you’re strong the whole fight. You don’t just want to be strong in the beginning. You want to be strong even at the end of the fight.”

3 to 10 rounds of five minutes

Set to 15-percent incline for 45 minutes

You might not think that walking would do much for you in the conditioning department — but a 15-percent incline is the maximum for most treadmill models, making it much harder than just a stroll in the park. Jackson said he aims to get his heart rate up to 130 beats per minute (BPM) while doing his treadmill walk to add to his fight preparation.

Jackson’s twist on that ab wheel adds some heavy weights and a barbell instead. He loads up a barbell with 45 pounds on each side (if you have rounded plates) and rolls 25 times every day, focusing on maintaining a tight core. Jackson said he supplements that routine with 75 hanging-knee raises: 25 straight-on, 25 on the left and 25 on the right.

Training and strengthening the core especially correlates to the cage when he’s on the ground, according to Jackson. “In Brazilian jujitsu, if somebody is laying on top of you and you got to get up, your core gets tired,” he admitted. “If I haven’t been working on my core, it’s harder to get up off your back because your core fatigues. You get tired and it takes a lot of core to do certain moves and get out of moves. That’s why a strong core is important.” Plus, Jackson says, “I think I read in Men’s Health that if you have [strong] abs, you live longer and stuff.” (He’s right! We did say that.)

Don’t look now, but Jackson and Silva share a similar pushup regimen. But while Jackson knocks them out to improve his strength for the end of fights, Silva includes them in his workouts for a different reason. “To push the guy,” he says. “To create space.” That created space could be crucial for when fighters get tangled up in the cage because that earned distance could be just enough real estate for Silva to throw a heavy blow or strike with his knees.

There are countless ways to train your cardio levels while preparing for a big fight. Silva calls jumping jacks a staple of his own routine, aiming for 200 reps per session… and likely a large puddle of sweat. The key to Silva’s jumping jacks? “Go faster as you go,” he said, “and make your cardio go up.”

At 5-10, 230 pounds, the base for Silva’s strength is his core. “It’s really important to have a strong core to receive a punch, to take a guy down and on the ground, you use your core to get back up, to create space and stand up in [your stance],” he said.

He aims for 150 crunches daily to make sure his core is primed for a fight, especially if it’s going to go the full 25-minute distance.

Jackson and Silva are heated rivals, but their reasoning for incorporating some form of squat into their training regimen is the same. “The power from the punches come from your legs,” Silva affirmed.

Silva said he squats about 225 pounds for four sets of 12 reps each — but you should find the weight that you’re comfortable to complete those reps to strengthen your legs at your own pace.

Having the kind of durable jaw that can handle punishment is vital for fighters. So is a solid neck to hold that jaw up. “You have to be able to take a punch,” Silva said. “A strong neck is really important.”

That’s why Silva swears by neck ups. To perform the move, grab a weight bench and lay on your back so your head is hanging off of it. Then, use your neck to raise your head up until your chin touches his chest, pausing to squeeze the muscles. Then, lay face down and repeat for another 25 reps, this time lifting your neck up as high as possible. Lay on your left shoulder and repeat, then for your right shoulder.

Jackson recommended starting by taking a Muay Thai kickboxing class. “Most fights start on the feet,” he said. “It’s very practical. You got your fists, elbows, knees, kicks. In my opinion, it’s the best form of self-defense in martial arts.”

Silva isn’t as concerned about which particular martial arts discipline you choose (most fighters use a combination of Muay Thai, Brazilian Jiu Jitsu, Judo, and others). His best advice? Cementing a routine that you religiously follow. “Try to find a good gym, have a schedule or take a class every day,” he advised, “and make it a habit.”