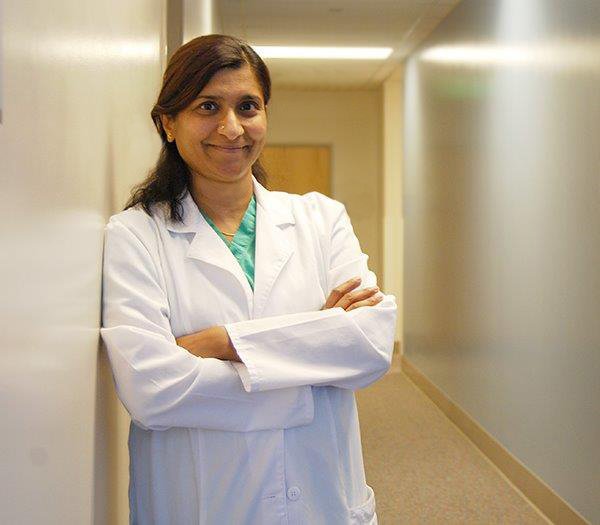 Using catheter-based ablation instead of medications alone reduces the risks of death and stroke in patients with the common form of heart arrhythmia known as atrial fibrillation, or AFib, new research from UC Davis physicians shows.

“Less than 2 percent of patients undergo ablation early in the course of AFib when the procedure can be most beneficial,” said lead author Uma Srivatsa, professor of cardiovascular medicine at UC Davis Health. “Our study shows that ablation may be considered as a primary treatment for everyone with the condition.”

Part of the hesitation to use ablation earlier and more often could be because comparative outcomes research so far has produced inconsistent results. Most of those studies focused on single centers or were controversial in terms of patient selection and cross over, according to Srivatsa.

The new study, published in the journal Circulation: Arrhythmia and Electrophysiology, addresses those limitations by evaluating AFib treatment outcomes over a long period of time and for large numbers of multi-ethnic patients with similar health statuses.

“It’s only with more robust, real-world studies like ours that we’ll be able to develop a clear picture of what works best in addressing clinical outcomes for AFib patients,” Srivatsa said.

It’s estimated that at least 2.7 million Americans have AFib, which is diagnosed when the heart beats inconsistently due to uncoordinated signals between its upper chambers. The condition can cause lightheadedness, fatigue, shortness of breath and chest pain, and is associated with increased risks of stroke and death.

Medications can help reduce AFib symptoms and risks by controlling heart rate and rhythm and reducing blood clots. Ablation is a more long-term solution that involves using heat or extreme cold to destroy the heart tissue responsible for the faulty electrical signals, reducing the need for rhythm-control medications.

In conducting the study, Srivatsa and her colleagues evaluated medical records from the California Office of Statewide Health Planning and Development for AFib patients hospitalized between 2005 and 2013. Two groups of about 4,000 each were compared: one that was treated with ablation and another that was not. The groups were matched in terms of AFib patterns and prior hospitalizations.

Outcomes for both groups were similar in terms of rates of death, ischemic stroke and hemorrhagic stroke within 30 days of hospitalization. Beyond 30 days, however, the benefits of ablation were apparent:

The study confirms the overall short- and long-term safety of ablation as an AFib treatment, according to Srivatsa.

“Our data supports wider utilization of ablation along with improving the awareness of its benefits,” she said.