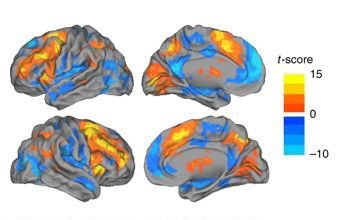 Brain activity is driven by encounters with external stimuli and situations, simultaneously occurring with internal mental processes. A team of researchers from Stanford University, with funding from the NIH BRAIN Initiative, in part through the National Institute of Biomedical Imaging and Bioengineering (NIBIB), has discovered how the brain dynamically handles cognitive tasks while it also is engaged in internal mental processes.

“This study is an example of the importance of computational models in driving research and facilitating our understanding of the human brain,” said Grace Peng, director of the NIBIB program in Computational Modeling, Simulation and Analysis. “The team developed a computational model to make fundamental findings that have never before been revealed about how our brain processes information at various levels during daily decision making.”

In their study, published online June 27, 2018, in Nature Communications, the researchers used a novel computational model and methodology to identify unique patterns of dynamic brain circuit activity, or brain states, that corresponded with optimal conditions for cognition. They also uncovered the presence of transitional brain states when brain circuits switch in their dynamic functional configuration between different task conditions.

“Previous studies assumed that if you asked the subject to do a particular task, such as a memory task, that you would observe brain activity that is driven purely by the task,” said senior author Vinod Menon, Ph.D., Rachel L. and Walter F. Nichols, M.D., Professor of Psychiatry, Neurology and Neuroscience at Stanford University. “We now think that a whole set of internal, or hidden, brain states can influence how you process tasks. Here, we identify hidden brain states and demonstrate for the first time that they influence human cognition and decision making in profound ways.”

For their study, the researchers used data from 122 participants from the NIH-funded Human Connectome Project (HCP). The HCP includes only data from healthy adults, however, there is great variation in brain function and behavior between individuals. In two sessions of several minutes each, study participants performed a working memory task during functional magnetic resonance imaging (fMRI) that noninvasively captured images of their brain activity. Working memory is the ability to temporarily store and manipulate information in one’s mind—for example, recalling a 10-digit number in reverse order—and is a critical day-to-day cognitive process. The fMRI brain scans captured images of brain activity in discrete regions and functional connections between regions during working memory that occur within frontal and parietal cortices of the brain.

The working memory exercise consisted of recalling pictures of faces, places, tools and body parts that appeared sequentially on a monitor. In the most difficult challenge—a two-back working memory task—the participant was required to recall what had been displayed two images prior to the current image. In an easier challenge—a zero-back task—the participant was shown an image as a cue and asked to indicate when that cue appeared amongst different consecutively displayed images. Researchers also conducted scans while participants viewed a blank frame, to establish a baseline.

During the two-back working memory exercise, researchers identified dominant brain patterns that they called a high cognitive-load state. “The 2-back working memory condition is the most challenging,” Menon said. “You have to keep the information in mind and constantly refresh, and update, and respond.” said Menon

They similarly identified a low cognitive-load state associated with the zero-back task, and a fixation state associated with brain patterns during the baseline condition. Their computational analysis revealed that the more time spent in the high cognitive-load brain state while conducting two-back working memory exercises, the better a participant performed on that test. Time spent trying to perform the two-back task while in any other brain state caused lower performance.

“When you are doing the two-back task, you must engage a particular configuration of brain circuits,” he said. “If you don’t engage it, or if you don’t engage it at the right time, your performance suffers. The way states are engaged has a big impact on how well a subject does the working memory task.”

“We know that when you go from one task condition to another your brain state is not changing instantaneously; it takes time for systems to come online as you go from a low cognitive load to a high cognitive load,” explained Menon. “The strength of the study is that we showed that the states we identify, the transitions between states, and the relationships of these same states to behavior is very consistent across multiple datasets.”

The researchers also wanted to know whether the hidden brain states impact how well a participant will perform tasks. “For example, we asked whether performance would be negatively affected if you get distracted because you are thinking about something, and don’t engage the brain systems and networks optimally.”

Menon explained that there is an optimal brain state for each task condition and that failure to engage these states in a timely manner is associated with poorer working memory performance.