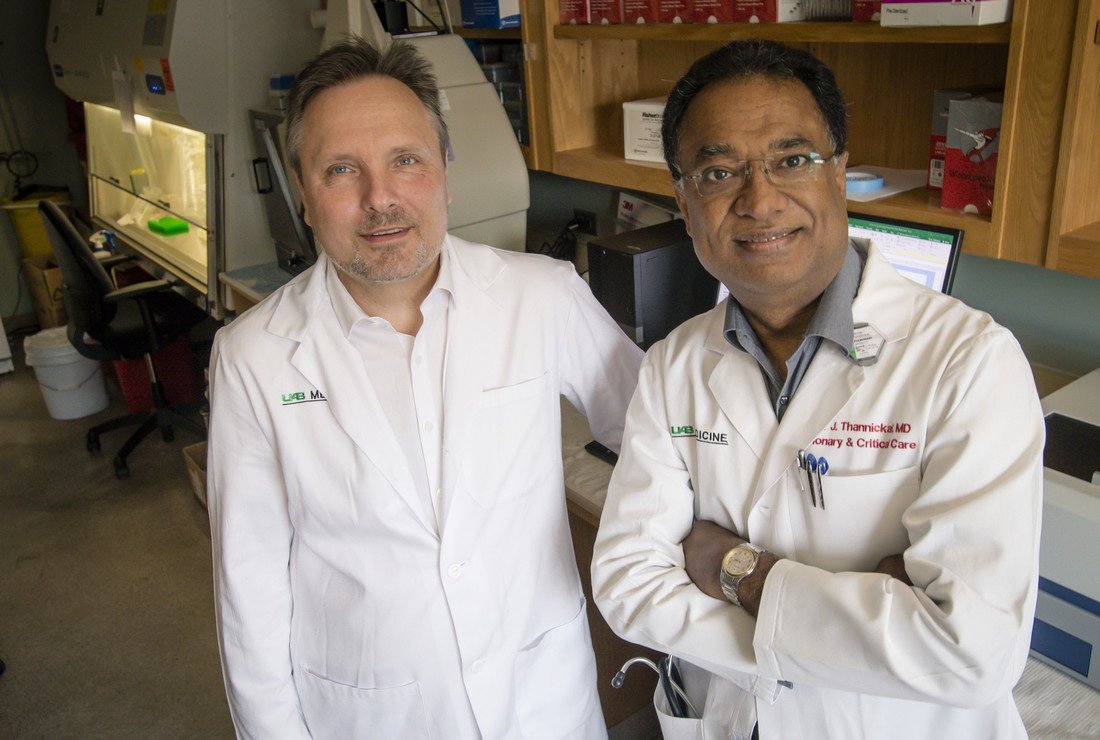 Researchers at the University of Alabama at Birmingham have shown—for the first time—that established lung fibrosis can be reversed using a drug treatment that targets cell metabolism.

This novel finding, reported in the journal Nature Medicine, is important because, despite significant advances to reveal the pathological mechanisms of persistent fibrosis, effective treatment interventions are lacking.

Pulmonary fibrosis can develop after lung injuries like infections, radiation or chemotherapy, or it can have an unknown cause, as in idiopathic pulmonary fibrosis, or IPF. IPF is a progressive, and ultimately fatal, lung disorder that strikes more than 150,000 patients a year in the United States and more than 5 million worldwide.

In experiments using lung tissues from patients with IPF, mouselung fibroblasts and a murine model of lung fibrosis, a team led by Jaroslaw Zmijewski, Ph.D., and Victor Thannickal, M.D., showed the reversal of lung fibrosis and the underlying cellular mechanisms affected by the drug treatment.

Zmijewski and Thannickal are, respectively, associate professor and professor in the UAB Department of Medicine. Zmijewski serves as research director for the Translational Program in ARDS. Thannickal holds the Ben Vaughan Branscomb Chair of Medicine in Respiratory Disease and is director of the UAB Division of Pulmonary, Allergy and Critical Care Medicine.

Interestingly, the drug that accelerated the resolution of lung fibrosis is metformin, which is a safe and widely used agent for non-insulin-dependent diabetes.

The research focused on AMP-activated protein kinase (AMPK), an enzyme that senses energy state in the cell and regulates metabolism. Zmijewski, Thannickal and colleagues found that AMPK activity was lower in myofibroblast cells within fibrotic regions of human lung tissue from IPF patients. Myofibroblasts deposit extracellular collagen fiber as part of the fibrosis process. These myofibroblasts were metabolically active and were resistant to the programmed cell death called apoptosis, a natural process that removes more than 50 billion damaged or aged cells in adults each day.

Activation of AMPK in myofibroblasts from lungs of humans with IPF, using the drug metformin or another activator called AICAR, led to lower fibrotic activity. AMPK activation also enhanced the production of new mitochondria, the organelles in cells that produce energy, in the myofibroblasts, and it normalized the cells’ sensitivity to apoptosis.

Using a mouse model for lung fibrosis elicited by the anti-cancer drug bleomycin, the research team found metformin treatment, starting three weeks after lung injury and continuing for five weeks, accelerated the resolution of well-established fibrosis. Such resolution was not apparent in AMPK-knockout mice, showing that the effect of metformin was AMPK-dependent.