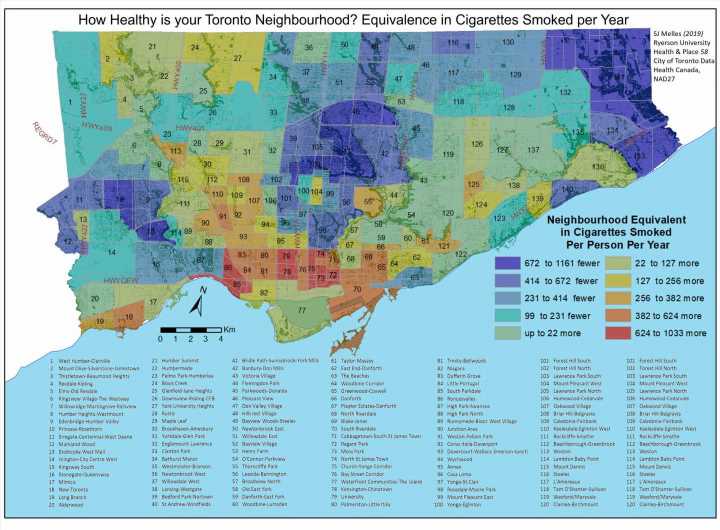 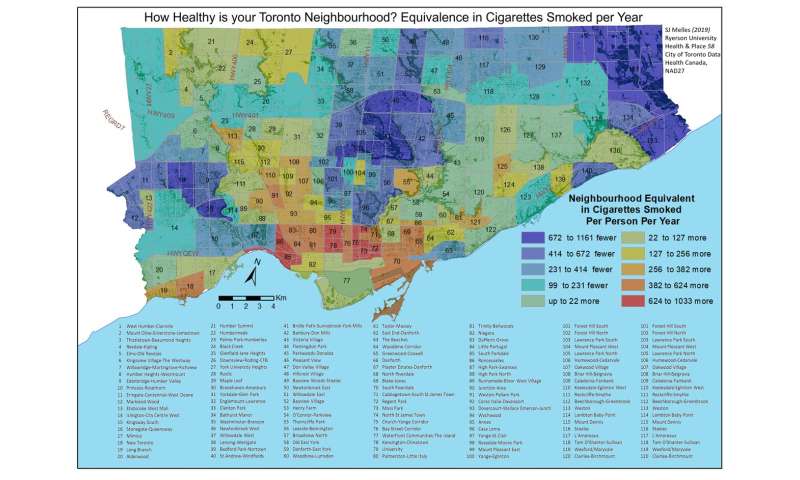 We know that our environment affects our health. More specifically, it’s understood that exposure to pollution and access to medical care play important supporting roles in maintaining health and wellness. A new in-depth study from Ryerson University assesses the link between premature mortality and a combination of environmental, health, socioeconomic and demographic characteristics within Toronto’s 140 neighbourhoods and reaches some noteworthy conclusions, both anticipated and surprising.

First, the anticipated: authors Luckrezia Awuor, an Environmental Applied Science and Management graduate student, and Stephanie Melles, Assistant Professor in the Department of Chemistry and Biology in the Faculty of Science, determined that premature mortality in City of Toronto neighbourhoods was predicted by a combination of unhealthy environments and embedded socioeconomic imbalances.

“It’s an ongoing concern that neighbourhoods with fewer trees, lower uptake rates in cancer screening programs, higher levels of pollution and lower total income levels best predict increased mortality rates,” says Melles. “It’s also the case that visible minorities and Indigenous peoples are most at risk of living in neighbourhoods with higher premature mortality rates. Though we expected these results, they emphasize a persistent issue of social injustice.”

Interestingly, higher levels of traffic-related ultrafine particulates and industrial carcinogens and non-carcinogens did not always correlate to higher rates of premature mortality. This is where the surprises came in. Larger suburbs with higher pollution levels than downtown neighbourhoods showed a decreased rate of premature mortality by about 17 deaths per 100,000. This decrease is equivalent to smoking 125 fewer cigarettes per year.

“This contradicts other published findings,” says Melles. “Generally speaking, greater pollution correlates with greater premature mortality. In this case, the suburban neighbourhoods also had less walkability, which may minimize the health impact. It’s also possible that the differences between where a person lives and where they work play a role in their overall exposure to pollutants. We have other hypotheses that were beyond the scope of our study. But we were surprised.”

Also surprising: some Toronto neighbourhoods with major highways connecting the city and those along the shoreline with good tree cover, extensive green spaces and no greater measured pollution than other downtown areas showed above average rates of premature mortality. The area that contains the Rouge National Park was one of them.

“We have some unexplained variations in the outcomes,” says Awuor. “This tells us that we are missing a variable we haven’t yet identified. Why do shoreline neighbourhoods fare worse than others? Is there some additional exposure to undetermined air or water pollutants that cross Lake Ontario? The higher rates of premature mortality are correct, but the explanations aren’t there.”

The authors point to one reason they can’t yet pinpoint precise explanations for what they call “residual neighbourhood patterns,” which are those below or above expected rates of premature mortality: an insufficient number of air quality monitoring stations. With only four stations in the city, it’s not possible to fully understand where and when citizens are being exposed to carcinogens and ultrafine particulates.