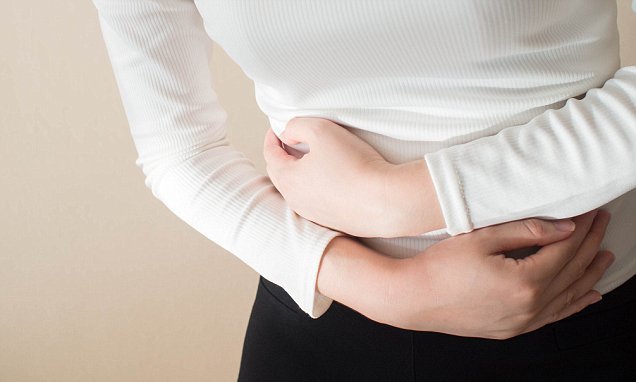 Lurking inside your gut, the cause of nasty tummy aches you’ve probably never heard of…

The pain was excruciating, waking me from a deep sleep. It felt as if a convoy of trucks with spike-laden tyres was running through my stomach.

As it was 7 o’clock on a Sunday morning, I twisted and turned in bed for a few moments, almost too shocked to know what to do next (my husband, Martin, was sound asleep by my side).

But with every passing moment, the stabbing grew agonisingly worse and, after five minutes, I croaked for Martin to call an ambulance, convinced I had a ruptured appendix, which as a health journalist I knew could be fatal. 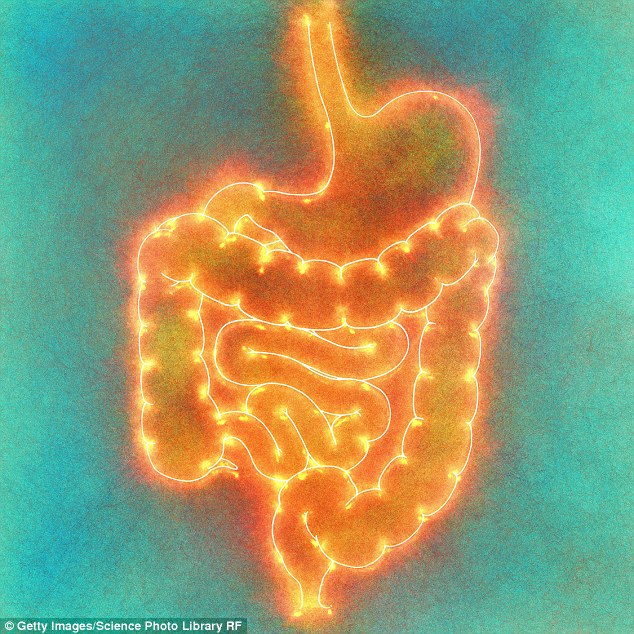 Fact: Approximately half of us have diverticula by the time we’re 50, and nearly 70 per cent develop them by the age of 80 — ranging from pea-size up to a hand span, or even bigger

Even if it wasn’t my appendix, in the chaos of the now breathtaking pain I also remembered what many of the doctors I’ve interviewed over the years had repeatedly told me: if it doesn’t feel like anything you’ve ever experienced before, then get help. Quickly.

The ambulance arrived within 15 minutes and took me straight to hospital. By now the pain was worse than anything I’d ever felt before — even childbirth.

On arrival at A&E, I was given a raft of blood tests together with a CT scan. In fact, it wasn’t a ruptured appendix, I had an extremely serious case of diverticulitis — the infection of pouch-like pockets (or diverticula), which can form anywhere in the intestine, though are found most commonly in the lower portion of the large intestine.

In my case, the infection was extensive, meaning it had been there for some time, and had perforated through the lining of the intestine, forming a large abscess, 8cm by 4cm.

I was told it had been caught in time — i.e. it was treatable — but frankly I was too dazed to take any of it in. I just wanted the pain and sickness to end.

I had to spend nearly two weeks in hospital and as I recovered — thanks to intravenous antibiotics and dosed up with painkillers — I started to ponder how this could happen to a non-smoking moderate drinker, who has always enjoyed good heath and has no history of gastric or gynaecological issues, let alone ever needing hospital treatment.

In fact, the formation of diverticula can be part of the ageing process. 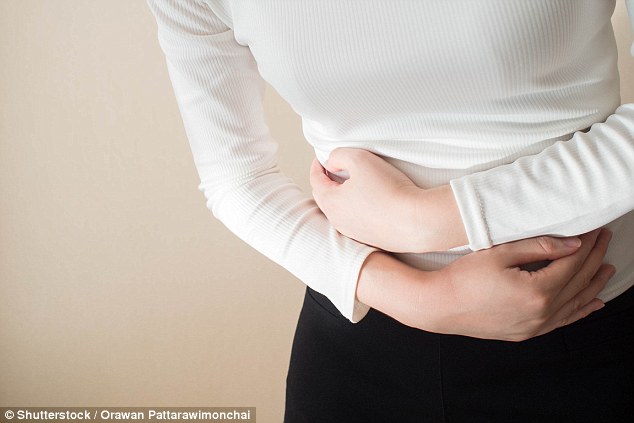 Cause: As well as ageing, a low-fibre diet may be implicated; food that doesn’t move along the gut can cause pressure points in the intestine, which lead to the formation of these pockets

Approximately half of us have diverticula by the time we’re 50, and nearly 70 per cent develop them by the age of 80 — the diverticula can range from pea size up to a hand span, or even bigger.

As well as ageing, a low-fibre diet may be implicated; food that doesn’t move along the gut can cause pressure points in the intestine, which lead to the formation of these pockets.

Most of the time the pouches don’t cause any symptoms. The only sign may be to have a bit of pain, which can be diagnosed as irritable bowel syndrome or perhaps a gynaecological issue such as fibroids, says Alastair Forbes, a professor of gastroenterology at Norwich Medical School.

Alternatively, you may have grumbling pains for years — looking back, I occasionally did have brief spasms in my lower right side, but dismissed them out of hand since they happened perhaps once every four or five months.

But you will really notice it if the diverticula become inflamed or infected, as a result of bits of food or faeces getting caught in the pouch. ‘Then the neck of the diverticulum becomes narrow and an abscess forms,’ says Professor Forbes.

The problem is that in the early days it’s easily misdiagnosed —especially in women. That’s because GPs tend to want to rule out more serious diseases such as ovarian cancer and, if the results are clear, diverticulitis just isn’t on the radar.

Meanwhile, your doctor may suggest taking painkillers, which can make it worse. And this is what happened to me.

The week before my attack — on June 10 this year — I had returned from holiday where, on the last night of the trip, I developed what felt like a mild stitch. 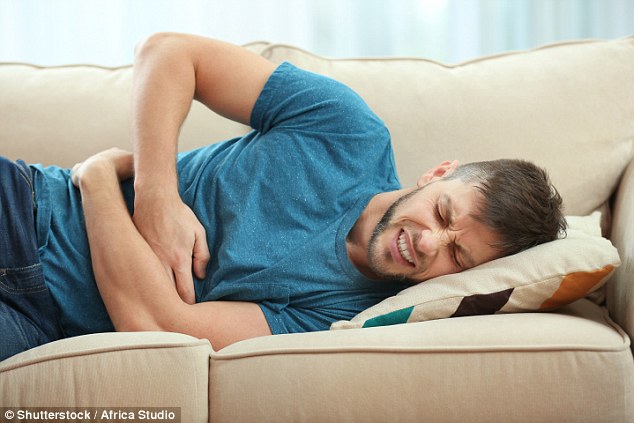 Be careful! Meanwhile, your doctor may suggest taking painkillers, which can make it worse…

Three days after my return, I went to see my GP, who was concerned it might be something like a fibroid (a growth pressing on the womb) and sent me for an emergency ultrasound scan the next day.

The procedure was less than enlightening. Though I yelped with pain when the sonographer dug into my right side with the scanner, she revealed very little, saying only that my doctor would be in touch if there was anything to report. Meanwhile, at my GP’s suggestion, I took ibuprofen for the pain — I’ve since been told by my consultant that non-steroidal anti-inflammatory drugs such as this can exacerbate the problem because they can irritate the stomach.

And I was taking them every four hours — otherwise I felt well. But three days later I was woken up by pain and was rushed into hospital with the attack.

So did my doctor miss a trick? If a GP thinks it’s a gynaecological problem, you’re likely to be referred for an ultrasound scan, as I was. However, this technology is ‘very poor’ for looking at the bowel because it has the same consistency as the rest of the tissues around it and so the pockets don’t show up, says Colin Elton, a consultant colorectal surgeon at the Royal Free Hospital in London.

WORRYING SIGNS TO WATCH OUT FOR

Most of the time the pouches that can form in the intestine (diverticula) don’t cause problems, says Professor Forbes.

If the diverticula become inflamed or infected, an abscess can form. Early signs of a problem may include feeling bloated with perhaps some dull pain, especially on the left side (the site of the lower large intestine) where diverticula are most common.

As the infection spreads, this can cause excruciating pain as well as triggering fever, nausea and vomiting; about a third of those with diverticulitis will develop further complications such as an abscess, which can perforate the bowel and which is potentially life-threatening if the infection spreads and is untreated.

The only thing that will give a clear diagnosis of the disease is a CT scan. You will also need blood tests to measure C-reactive protein levels, which indicate abnormal inflammation in the body.

‘Of course, it’s very important for GPs to consider gynaecological issues such as abnormalities in the ovaries when a female patient presents with abdominal pain,’ says David McArthur, a colorectal surgeon at Spire Parkway in Birmingham and The Heart of England NHS Foundation Trust. ‘But, equally, it’s important to consider other causes.’

However, diverticular disease might not be considered as an option by a doctor, he suggests. When GPs see women under, say 60, with abdominal pains, they’re not thinking about diverticulitis because it’s seen as a condition of ‘people who are older — this is a misconception: I’ve seen patients aged from 19 to 90 with the condition’.

He adds: ‘Diverticulitis has symptoms that can mimic other conditions — especially for women — which is why it is important to see your GP about any vague abdominal pain, bloating and over-sensitivity when touching the abdomen.’

If you have diverticula, or have had diverticulitis, it’s important to make lifestyle changes to avoid infection, which means eating more fibre. ‘You need between 18g and 30g of fibre a day,’ says Mr McArthur. One slice of wholemeal bread, for instance, will provide around 2g of fibre. ‘Drinking plenty of fluid — two to three litres a day — is also important,’ he says.

Since my infection, I’ve had to change my diet, which admittedly fell short of five-a-day. I’m also not a great fan of bread or wholegrains, but I am making the change to boost my fibre intake such as switching from white to brown rice.

Counter-intuitively, you may also want to avoid healthy nuts and seeds, says Professor Forbes. ‘There is some limited evidence that nuts and seeds or anything spiky might exacerbate an attack.’

The key is for diverticular disease to be on your radar. ‘It is so common, that doctors should consider that this could be one reason for the problem when they first see the patient,’ says Professor Forbes. Even if the patient is a female, non-smoking and (almost) a size 10. Just like me.