As I posed for the photographer, hand on hip, I felt confident, liberated and sexy.

But it wasn’t just any photoshoot, I was topless – revealing the results of my mastectomy I’d had just three months earlier.

I was a little nervous taking my clothes off in front of a stranger, but I thought: If I’ve got this far, I can do anything – after all, nothing could be as scary as having cancer.

It all began when I was diagnosed in July 2021.

I had been in the bath when I first found the lump in my left breast, aged 39, I could see it protruding from my skin. But because I was on my period and breastfeeding my youngest daughter at the time, I put it down to that.

When it was still there four weeks later though, I knew I had to make an appointment with my GP. The doctor agreed with me that it was probably nothing serious, putting it down to a blocked milk duct, but referred me to the breast clinic to rule out anything more sinister. 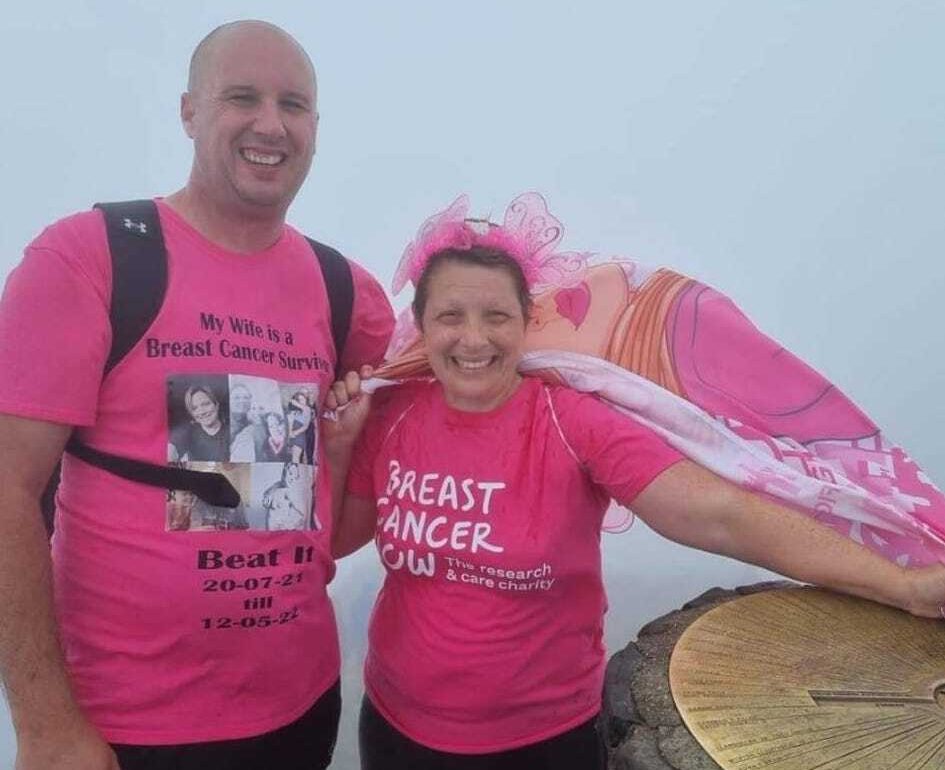 I had an ultrasound, a mammogram, then a biopsy. Then it came – my diagnosis, a week after my biopsy. I had breast cancer, with an MRI showing it was invasive lobular carcinoma, a type of breast cancer that starts in the lobules (milk-producing glands) of the breast.

I thought of my husband Anthony and daughters Amelia, 10, and Eve, five. All I wanted was a future with them, a chance to see my girls grow up. So when I was told I needed a mastectomy, I was almost looking forward to it – I just wanted the cancer gone.

In September 2021, I went into theatre for my mastectomy – to have my left breast removed.

When I came around in the hospital bed and saw Anthony’s face, I smiled. Everything was going to be OK.

Before the surgery, I’d read that some women couldn’t bear looking in the mirror after a mastectomy and I was worried that I would feel less feminine and unattractive. So when I actually saw myself, I was pleasantly surprised. I felt good, even sexy!

I had liked my body before my diagnosis, but I was never outwardly very confident. I was a shy person, the type to keep their head down while walking.

Seeing myself just proved to me how far I’d come and that I was still the same person I was before. More importantly, I was alive.

Back home, I pulled away my dressings to show Anthony, Amelia and Eve my chest. I didn’t want our daughters to be scared, so chose to be open and upfront with them. ‘You look beautiful, Mummy,’ they said.

Their words meant everything.

I wanted to thank the charity Breast Cancer Now, whose nurses had supported me with my diagnosis over the past few months, so I decided to do a burlesque photoshoot with my mastectomy scar on show to raise money for them.

I’d actually won a competition for a free photoshoot before the diagnosis but had put off going, because I lacked the necessary confidence. Now, I booked myself in straightaway.

I’d never posed in underwear before and was apprehensive, but after the photographer showed me the first picture of myself, I couldn’t believe how good I looked! Suddenly I felt brave and determined to carry on.

And as the camera continued to click, all my inhibitions disappeared.

I was thrilled when I saw the final pictures and when I posted the black and white photo showing my mastectomy scar on social media, I got such a huge, positive response with everyone saying how fantastic I looked.

It was just the boost I needed and made me love myself even more. I’ve decided to get the image of that photo tattooed on the top of my right arm, to serve as a reminder that it’s possible to be amazing – and sexy – after breast cancer.

I had a second operation in October for an axillary node clearance – a procedure to remove lymph nodes under my arm – and recovered fairly quickly.

Then came the best news I could have wished for – the surgery had removed all the cancer. I was in the clear! It was a real weight off my shoulders, despite knowing I still needed to have chemotherapy as a precaution, as well as radiotherapy and tamoxifen.

Chemo began and not long after, I was washing my hair in the bath when it began coming out in clumps in my hands.

The bath water was full of it and when I got out and looked in the mirror, there was a large bald patch on top of my head.

My eyes welled with tears and panic set in. It was the most upset I’d felt since finding the lump.

Then, on my eldest daughter’s 10th birthday, I suddenly got the urge to get rid of it all, to remove the stress completely. So my husband grabbed some clippers and shaved my head. Afterwards, I felt more myself than ever.

Now I’m on tamoxifen – a hormone therapy to block oestrogen from reaching cancer cells – for 10 years and have a mammogram every year. My last one in July came back clear.

Cancer is serious enough, so all along I’ve tried not to take it too seriously. I’ve spray-painted my bald head pink, worn funny hats, made an ABBA video with my daughter while wearing a funny wig – you name it.

I recently took part in a TV advert for Breast Cancer Now, where I proudly reveal my mastectomy scar before my daughters run in to hug me. The advert is airing on TV now and just adds to the list of everything I’ve achieved in the past year.

It may sound mad, but cancer has changed my life for the better. Once quite a shy person, I’m now confident, walk with purpose and love my body more than ever before.

Of course, I would never choose to have the disease, but my diagnosis has taught me how to live my life – really live it – and I’ll always be grateful for that.

As told to Julia Sidwell

Metro.co.uk’s weekly The Truth Is… series seeks to explore anything and everything when it comes to life’s unspoken truths and long-held secrets. Contributors will challenge popular misconceptions on a topic close to their hearts, confess to a deeply personal secret, or reveal their wisdom from experience – good and bad – when it comes to romance or family relationships.