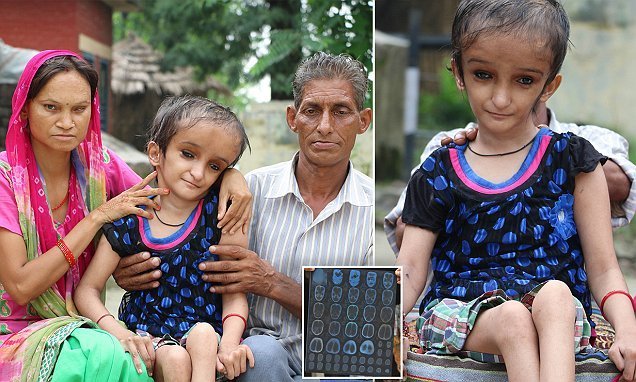 Teenager with a 27-inch head the size of a watermelon: 15-year-old cannot walk or sit up by herself after developing condition caused by a fall

Shivani Kumari can no longer hold up her own head because of a devastating brain condition she developed three years ago.

The teenager, from Himachal Pradesh in India – about 220 miles north of New Delhi –developed the illness after she fell over while playing with friends.

Now diagnosed with hydrocephalus, a condition in which fluid builds up around the brain, Shivani has been left with a head the size of a large watermelon.

Hydrocephalus can be fatal if it is left untreated but the operation Shavini needs will cost £1,200, which her labourer father cannot pay for.

The condition is not rare – it is thought to affect around a million Americans – but is usually treated before it becomes as severe as Shivani’s case. 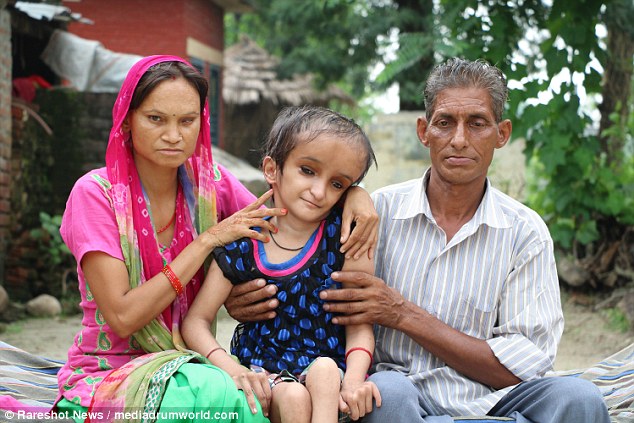 Shivani Kumari, pictured with mother Kushla Devi and father Gurmeet Singh, has been left with a massively swollen head after she fell over while playing with friends three years ago 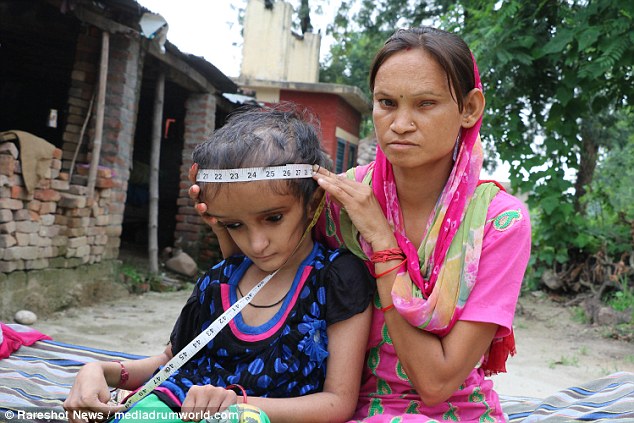 Shivani, 15, can no longer support the weight of her own head because of a condition called hydrocephalus, which means she can’t walk or sit up on her own

Shivani cannot walk or sit up by herself because her head is now so heavy – it has swollen to around 27 inches in circumference.

Despite being born normal, her life has now been turned upside down by the unfortunate condition.

When hydrocephalus develops in children and adults it is usually caused by a brain injury such as a stroke, brain tumour, blood clot or damage from a head injury.

Neighbours think she was a sinner in a past life

People living in her village are sympathetic and do not mock her, but they reportedly believe the condition is because of sins she committed in a past life. 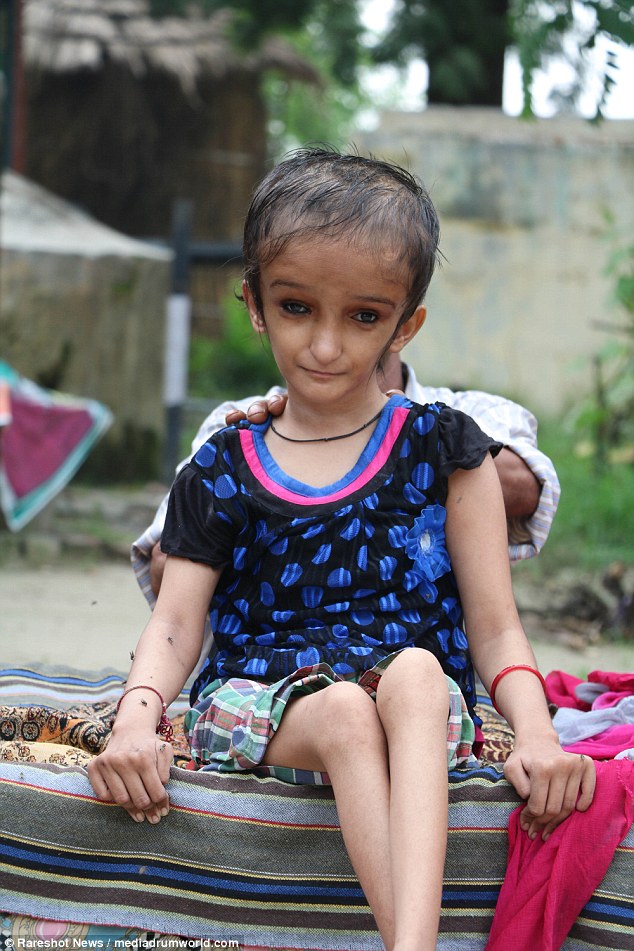 Shivani lives in Himachal Pradesh in northern India, where her neighbours believe she may have got the head-swelling condition because of sins she committed in a past life 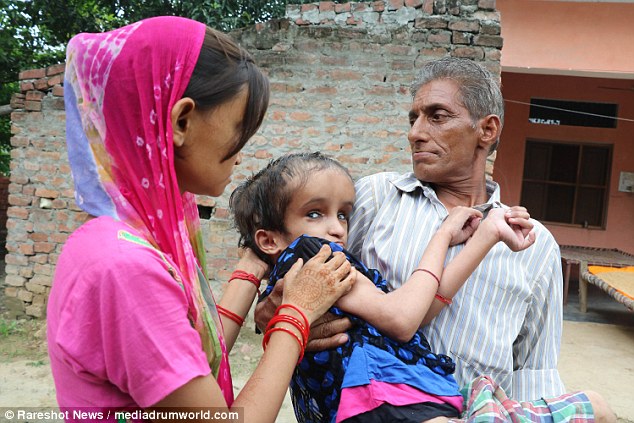 Hydrocephalus can be treated with an operation to insert a draining tube into the skull but her father, who works as a casual labourer, cannot afford the £1,200 treatment doctors suggested 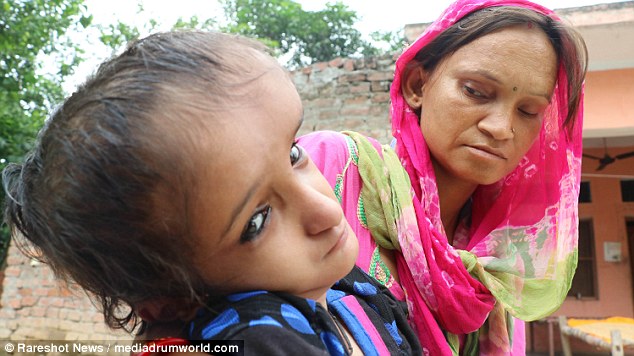 Shivani’s mother, Kushla, said her daughter was born normal but now, because she is young and her bones are not fully set, the pressure around her brain has changed the shape of her skull

Head problem began after falling down while playing

Her mother Kushla Devi said: ‘Shivani was born normal but one day she fell down while playing with her friends.

‘We carried her to the local doctor but he referred us to the higher medical institute.’

Medics at the biggest hospital in the region revealed to the family Shivani’s condition is caused by water building up inside her head.

And doctors suggested surgery – hydrocephalus can be improved and even cured using a draining tube – but it is too expensive.

Shivani’s father Gurmeet Singh, 40, works as a casual labourer and does not have the money to pay for the approximately £1,200 operation.

The average income in India is around £1,300 a year, according to WorldBank data. 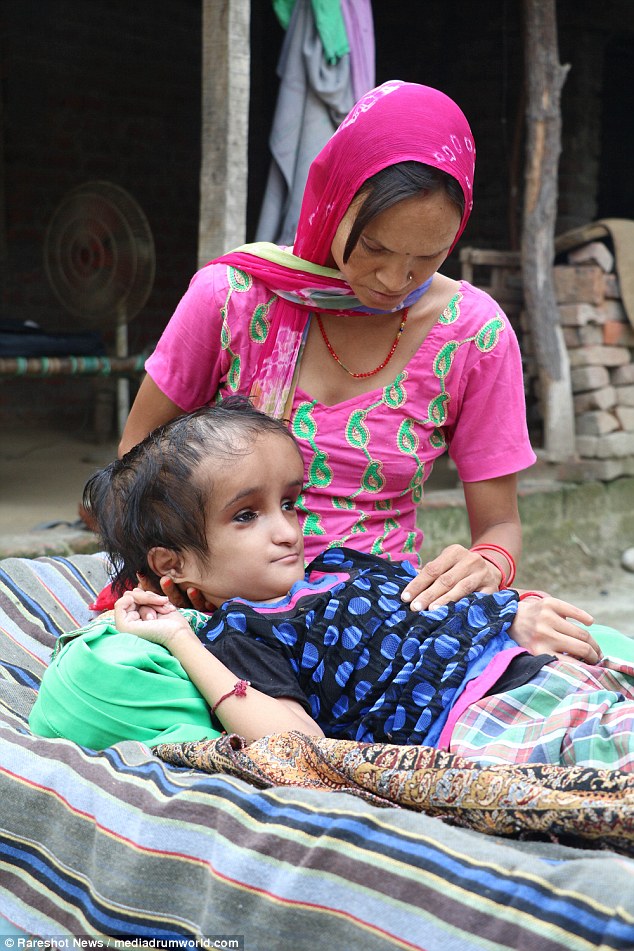 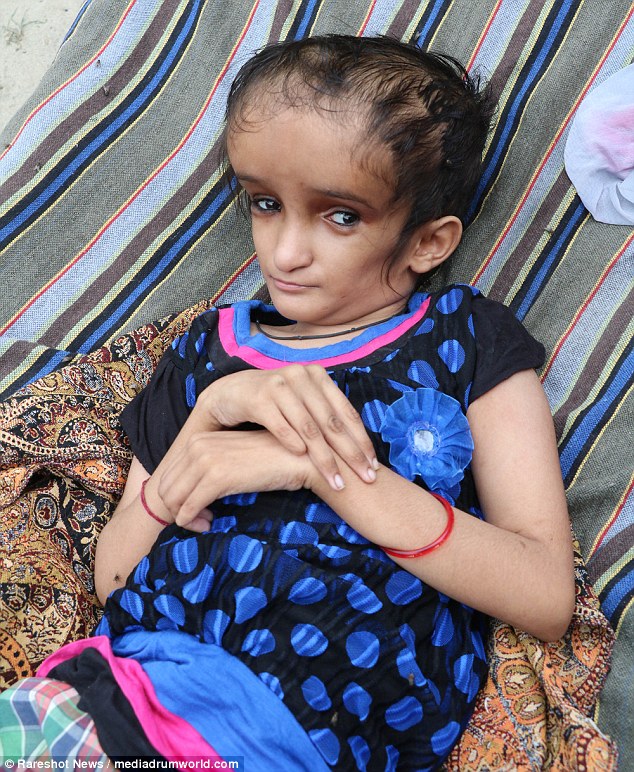 The treatment doctors suggested for Shivani would cost £1,200, about the same as a person’s average income for a year in India 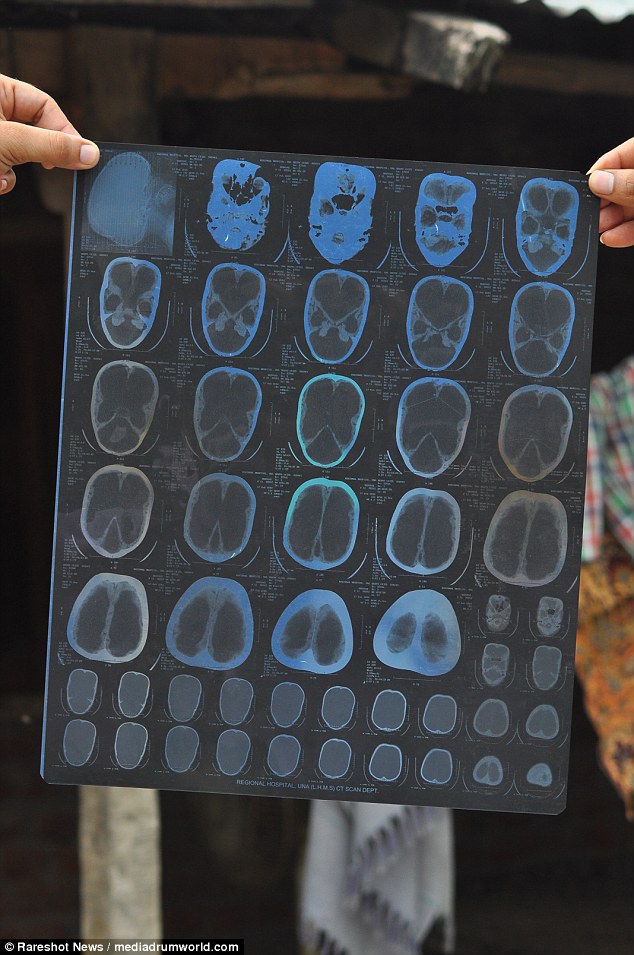 After she hit her head, Shivani’s spinal fluid began to build up around her brain in a condition called hydrocephalus, which can cause vomiting, headaches and balance problems

Unable to afford treatment, Shivani’s family are hoping for a miracle so she will one day get better.

It can cause the heads of babies and children to increase in size because pressure builds inside the skull, pushing out the bones which have not yet solidified.

Hydrocephalus can be treated by placing a drainage tube (shunt) between the brain and the body, to release the fluid and relieve pressure in the skull.

Because the shunt systems are too expensive for many people in developing countries, treatment can be difficult to come by and the condition can be fatal.

Hydrocephalus is a build-up of fluid in the brain, which can damage tissue.

Aside from an abnormally-sized head, other symptoms can include headache, nausea, vomiting, confusion and vision problems.

Hydrocephalus’ cause is usually unknown but may be due to issues with cavities in the brain or an underlying health problem that affects blood flow, such as heart disease.

It can also be acquired by damage to the brain due to a head injury, stroke or tumour.

Treatment is shunt surgery, which involves implanting a thin tube into the brain to drain away excess fluid to another part of the body where it can be absorbed into the bloodstream.

If untreated, hydrocephalus can be fatal due to increased pressure compressing the brainstem, which is responsible for regulating heart rates and breathing.

A patient’s prognosis after surgery depends on their age and general health.