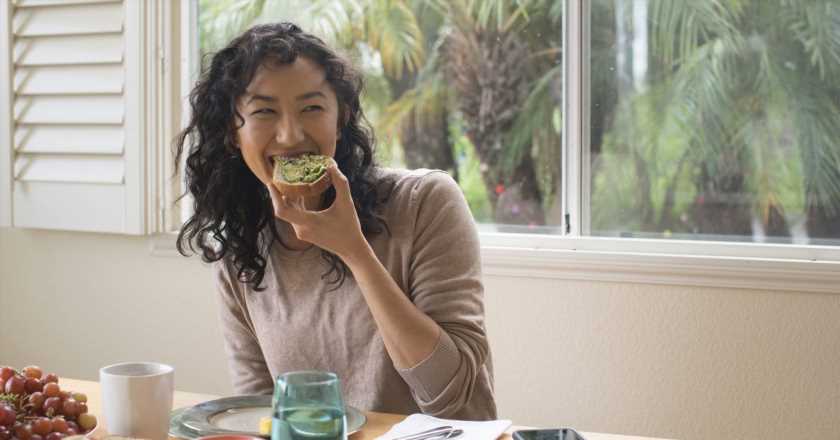 What does your appetite mean? The truth about hunger, fullness and why we want food.

What, when and how much we eat is so often put under the microscope. Have you ever sat down for a meal and been asked, “Are you really going to eat all of that?” or had someone say, “God, that would never fill me up.”

We all have different nutritional needs, cravings and levels of satisfaction. But our appetite can sometimes leave us confused – or even ashamed. So, we asked Tai Ibitoye, a dietician specialising in appetite regulation, to help us clarify how our hunger signals work.

Serving sizes: are recommended portions correct, and do they even matter?

First up, let’s clear up these two terms. “Appetite is the desire to eat food,” says Ibitoye. “Appetite for food can sometimes lead to hunger, but some people can have a desire to eat even when they are satiated and feel full.

“Everyone’s appetite is different. There isn’t a ‘normal’ appetite as what is considered the norm for one person will be different for another.”

What makes up your appetite?

If you think that your own body can dictate when you’re in the mood to eat and when you’ve had enough, think again. There are both internal and external things that influence our appetite, from how much is put in front of us to how much we’ve moved that day.

Appetite can change depending on internal and external cues

“We have hormones that can increase our appetite or suppress it,” says Ibitoye. “For example, ghrelin is a hormone that is produced and released by the stomach. It is termed the ‘hunger hormone’ because it stimulates appetite by being released into the blood.

“Ghrelin levels increase prior to meals and fall after consumption of a meal. Ghrelin levels can increase after dieting or due to a lack of sleep. Hence why some people can notice an increase in appetite and feel hungry when they don’t get a good amount of rest. Some people with genetic disorders like Prader-Willi syndrome may have high levels of ghrelin too.”

The rate of gastric emptying – the time it takes for the movement of food from the stomach to the small intestines – can also affect appetite. “Having higher fibre foods, fatty foods or eating large amounts can slow down gastric emptying and reduce the want to eat later in the day,” explains Ibitoye.

Why is fibre so good for you? Nutritionists explain the benefits of a high-fibre diet

Other factors like age and pregnancy can impact appetite: older adults tend to have lower appetites than younger people, and fluctuations in hormones during pregnancy can change how much you want to eat.

Studies show that how much we put on the plate – and even the size of the plate itself – can hugely dictate how big or small our appetite is. In one study, people ate 33.6% more popcorn when it was served from a large container than a medium-size container, even though the popcorn was disliked. That’s particularly true when we aren’t being ‘mindful’ of our meals, says Ibitoye: “Some evidence shows that distractions like watching TV when eating can make some people less responsive to internal appetite signals and lead to increased food intake.” So no matter what size portion of dinner you serve up on your plate, you’ll probably just eat it all if you’re transfixed by the TV.

Appetite can be impacted by distraction

How much you move can strongly dictate your food intake. The general rule of thumb is that the more active you are, the more your caloric requirements increase. But there isn’t always the same positive correlation between exercise and appetite or our desire to eat, says Ibitoye.

“Exercise can suppress appetite for a short period which might be due to redistribution of blood flow away from gut to muscles. After that, you might get an increased appetite as some people experience pleasure from food following a period of exercise to replenish energy stores,” she says.

Low energy: how to properly fuel your body to complement your exercise

In a 2018 review, researchers found that feelings of appetite were reduced during exercise performed at or greater than 60% peak oxygen uptake and returned within an hour. What’s interesting is that exercise can improve long term sensitivity to appetite – which is surprising if you’ve ever felt insatiable after a bout of intense training. Researchers found that habitual physical activity resulted in improved adjustments for the energy content and density of food, so people better balance the increased drive to eat with an improved satiety response to a meal. This doesn’t mean they eat less, but that their bodies seem to subconsciously better understand how to eat for their requirements.

Is having a big appetite a problem?

There’s no problem with having an appetite larger than the people around you. Despite what people think, a large appetite is usually a sign of a good metabolism or high activity levels, rather than something to be ashamed of.

However, if you’re always hungry and struggle to feel satisfied after food, that might be a problem with not eating enough calories, fibre or a balance of macronutrients, says Ibitoye. “It’s important that if you notice an increase in appetite levels and want to eat more, you mindfully follow your hunger cues,” she says. “To avoid overeating, also focus on getting enough sleep (between six and nine hours), eating slowly to help the body recognise when it is full and minimising stress levels – for some people stress can increase appetite and for others, it can reduce it.

“Having a one-off day where appetite isn’t the same as usual is not much of a concern but if it’s continuous, specifically if it’s low, then you should look into this further. Some people may experience low appetite due to isolation, low mood, reduced physical function and medical conditions. Low appetite can lead to reduced food intake, which can increase risk of malnutrition.”

As for appetite suppressant products? Let’s not even bother, says Ibitoye. Sure, there are things you can do, chew or take to make you feel less hungry, but your appetite is usually a sign your body wants something: calories, flavour or pleasure. Not only does attempting to squash those desires usually mean your appetite will come back with a vengeance later, but the products on the market tend to be marketed with a side of shame. You’re better off buying actual food.