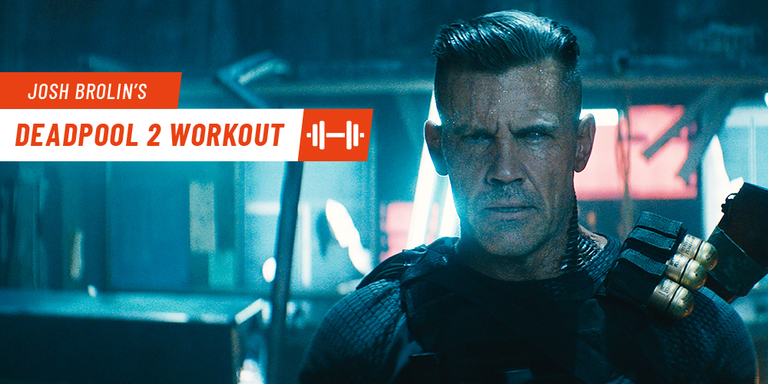 J0sh Brolin is on a bad streak.

The 50-year-old actor hasn’t necessarily done anything bad himself, but his roles in two of the biggest movies of the summer, Avengers: Infinity War and Deadpool 2 (and another headlining role in a third film dropping this week, Sicario: Day of the Soldado) have made him one of the most visible antagonists of the year.

Brolin’s role of Thanos in Avengers was huge, as he played the part of the Marvel Cinematic Universe (MCU)’s harbinger of doom — but his take on X-Men character Cable in Deadpool 2 really caught everyone’s attention. Take a look at the actor in the movie and it’s easy to see why: He is absolutely jacked.

Now offering 25 percent off your next autopsy. ☠️ #youremine #deadpool • Photo by @michaelmuller7

Now offering 25 percent off your next autopsy. ☠️ #youremine #deadpool • Photo by @michaelmuller7

Thanos was a CGI creation, but Cable’s muscles were all Brolin. He put the internet on notice by posting photos and videos of his workouts on social media, showing off the development of his truly impressive physique.

Drop sets to the point where you can't even lift the weight of your own arms. @justindlovato is my friend…usually, but when he pushes me close to tears, I know, deep inside, that he actually wants to play Cable even more than I do. #friendswhotortureotherfriends #FuckingBrolin #fuckingcable #ryanreynoldsismybitch @iambuilt @goldsgym #100%clean

Drop sets to the point where you can’t even lift the weight of your own arms. @justindlovato is my friend…usually, but when he pushes me close to tears, I know, deep inside, that he actually wants to play Cable even more than I do. #friendswhotortureotherfriends #FuckingBrolin #fuckingcable #ryanreynoldsismybitch @iambuilt @goldsgym #100%clean

The man behind Brolin’s transformation, LA-based trainer Justin Lovato, told MensHealth.com that the actor’s movie muscles were only possible through hours of work and sweat in the weight room.

MensHealth.com headed out to Lovato’s base of operations, the legendary Gold’s Gym in Venice, California, to try Brolin’s typical back workout to give you an inside look on what it took to build that Cable body.

“When we got that phone call saying that he booked this role and it was going to be one of the biggest roles for one of the biggest movies, we had to dive right in,” Lovato said. “He took it real seriously… training three hours a day.” Check out our full interview below:

Lovato pulled from his background as a former pro bodybuilder to build Brolin’s workouts. The actor was in the gym five to six days a week for three hours, split between two daily sessions. Brolin wasn’t pumping iron the whole time, though — Lovato also emphasized athleticism and movement in the program, separating the days between mobility work and circuits in the mornings and old-school bodybuilding moves in the afternoons.

“These workouts changed every single day,” Lovato said, “so we’re consistently confusing the body, changing it up, making it not adaptable, but making him work and learn each day.”

If you want to try this yourself, remember that the program was designed for an actor to achieve a very specific look in a short amount of time (12 weeks). The routine has a heavy volume of reps, which might be too much for novice lifters to handle, so listen to your body if it gets to be too much. You also might not have time to split your workout into two sessions a day — that’s okay, too. Try the conditioning and weight room work on different days to get a similar experience.

If you’re ready to buy in to the whole Brolin experience, Lovato offers the whole program in comic book form, Cable Built, on his website. Start with this workout, and you can start building the body of a time-traveling mutant super soldier, too.

Keeping your butt down and your chest tall, shuffle for 20 yards without crossing or knocking your feet together. Shuffle back to the starting point, the repeat for three sets.

Skip in a straight line for 20 yards, exploding off of one foot while driving your opposite knee into the air as high as possible. Return to the starting point, repeating for three sets.

Backpedal from an athletic stance with a slight forward lean. When you reach 20 yards, plant your foot to explode into a sprint back through the original starting line. Repeat for three sets.

This one is tough to explain, so check out the GIF above to master the move. Basically, you’re stepping forward using a diagonal shuffle, alternating between your left and right foot as an anchor through the center of your path. Repeat for 20 yards back and forth for three sets.

Using the same form as the lateral shuffle, move diagonally in between a five yard space for 20 yards. Return back to the original starting position, then repeat for three sets.

Lunge forward for 20 yards, then return back to the original starting spot and repeat for three sets. Be mindful to land evenly on the foot, driving evenly to work the glutes and hamstring with every rep.

Bend your knees to gather your weight, then jump forward, landing on both feet evenly. Explode with both legs and use the momentum to carry you into each successive jump. Perform the movement for 20 yards, return back to the start, then repeat for three rounds.

Perform each exercise consecutively for five rounds. Rest as little as possible while maintaining proper form.

Curl the dumbbells simultaneously, holding your palms parallel to each other. Use only your arms — if you feel yourself using your hips and backs to finish the reps, switch to a lighter weight.

Keep your spine straight and squeeze your glutes and core while repping through these pushups.

Use a low center of gravity to push a weighted sled across a flat surface. For an extra challenge, push for 60 yards using the sleds handles, then flip to the other, lower side and push from a position even closer to the ground.

Swing the battle rope with both arms simultaneously to smack it on the ground. Anchor your feet in the ground with your knees bent and your core tight, holding an athletic stance throughout.

Cool down with a 30 minute walk on the treadmill. Set the incline to 15, the speed to 3.0 mph, and keep your arms off the handles. “Too many people are holding on [to the treadmill], and that takes away the whole purpose of the incline,” Lovato said.

Session 2: The Cable Built Back Workout

Instead of powering through this set of deadlifts quickly (which you should never do in any case), Lovato had Brolin completely de-load the weight at the bottom of the movement, taking away any momentum from the plate bouncing. Pause at the bottom without rounding your back, then explode to the top of the movement, keeping your core tight. This is a ton of volume, so use a light weight, especially to start.

Use a handle that allows you to hold it with a neutral grip, with your palms parallel to each other. Pause for a full second at the top, recruit your lats to pull down and contract for two seconds, then ride it back to the top. The first set should start at a weight you’re comfortable to perform for 12 reps. Cut that by about 30 percent for 15 reps, then jump back up to the original weight for 6 reps. Finish off the set by performing the dropset weight for 8 reps. Again, this is a ton of volume, so be wise with your weights. For an extra challenge, don’t use the knee support provided by the pulldown machine.

Use a wide grip handle and focus on your upper back. To master the motion, break it up into three movements: first, hold the cable with your arms extended in front of your chest. Second, lean forward slightly, without rounding your back. Finally, pull the cable to your upper chest, targeting your upper back. As you get more accustomed to the movement, speed up. For an extra challenge, drop the weight 30 percent after each set and rep out until failure.

Approach this exercise like you did the other lat pulldowns, just switch up the grip. Here, you should use a handle that allows you to hold it at shoulder width with a pronated (overhand) grip. Again, try to ditch the knee support and add a dropset to failure at the end of each set for even more work.

Lovato wraps up Brolin’s back blast inside the Smith Machine with Pendlay Rows. Hinge at the hip and stand in an athletic position within the rack. Like the deadlift, you should de-load the weight at the bottom of the movement before using your back muscles to drive the bar back up to your chest.

Finish the session with another half hour on the treadmill, keeping your hands off the handles. Cyborgs don’t need support; neither should you.