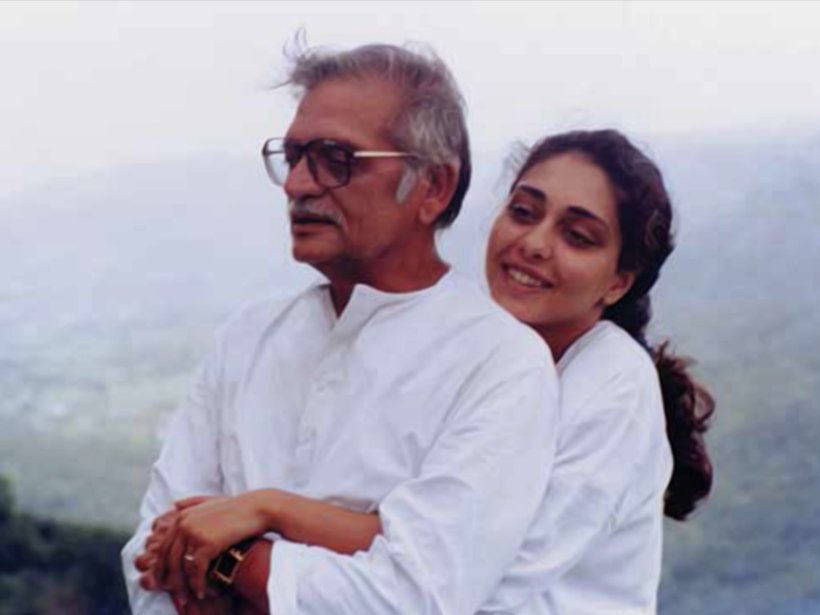 Writer-filmmaker Gulzar pens a heartfelt note on his bond with filmmaker daughter Meghna Gulzar in her book Because He Is, which reveals the man behind the legend.

Let me say a few words about the author, after she has said a ‘bookful’ about me. It’s funny – this little chit of a girl – a drop of dew … I ought to be helping her work out her life. Instead, she is working on my life, for a book!

It has been great fun bringing up this girl, ‘Bosky’. She has been the core of my entire existence since 13 December 1973, when she was born. I did everything to pamper and spoil her, but her mother was there to keep both of us disciplined! The growing up of a doting father and his growing-up daughter…

I tried to provide her with a boundless childhood, which every child needs from his or her parents, be they poor or rich. It is not wealth or resources which make the difference, but attention, concern and time which one has to provide. I had plenty of time, for I had nothing better to do than what I was doing – raising my child to be a good human being, a creative person and a loving soul.

I indulged all her friends who will find their names in the books that I wrote for Bosky, on every birthday of hers till she was thirteen. It was for all of them. Many of them have grown up at my house and I am happy that they are still around as her friends: Meeta, Zereh, Gulzar and Gudiya…

Bosky learnt to write at a very early age. All children imitate their parents – popping out her lower lip and holding her thinking pen, she would imitate me and scribble on a piece of paper. Chewing an end of her spectacles, she would pose over her book, like me … She started rhyming words, which she learnt in school.

I was going in for a bath one day when she asked me for money, which I refused her. I came out of my bath and there was a letter on my table, properly signed by her:

I have a father,

Who gives me money.

I’d hate him not rather

He loves me as honey.

I love my father too.

He polishes my shoe.

But today I want money,

So away he’s running.

Bhawana Somaaya published her first poem when she was only eight. (In the same year, she received her first marriage proposal, which was published in the same magazine.) Luckily for Govind, I did not pay heed to it. And fortunately, I waited till he arrived. Patience always pays, they say…

She honed her other mediums of expression as she grew up, but writing came to her quite easily, or comfortably, I should say. She was in college when her poems got selected for the Indo-British Anthology of Poems – I experienced a sense of fulfilment…

Books have always been a passion with me. I can easily spend a few hours in a bookshop. Whenever I went to a bookshop, I always took her with me and let her choose her own storybooks. It was on one such occasion that she pleasantly surprised the shopkeeper and me by asking for a book by the author’s name: ‘Do you have a storybook of Hans Christian Andersen?’ She was barely nine years old at the time…

We were destined to share many books as she grew older. But I never thought that one day she would be writing a book on me. But here we are! At the outset, I thought it would be difficult to relate my own life to her – I didn’t want to impose my own perspectives on her. That would be a very subjective point of view. But how would she know my past, how could she have a point of view on it when she was not even born?

One thing we all fail to realize is that as they are growing up, our children observe and absorb so much about their parents, about us, that their truths about their parents, about us, could shock us…They know if we don’t wash our hands before meals…They know the language we use if we abuse our servants…They know if we are at home and have conveyed a message on the phone saying that we have left … They know we tell lies … They instinctively know our relations with our friends and relatives.

They know our hypocrisies…

When Bosky started chatting with me on different issues, I knew that her questions arose because there was so much questionable about me…I made no pretence. I was honest and truthful and didn’t hide anything. I admire her sense of discretion and her own judgement.

In fact, that’s what makes a writer…

(Excerpted with permission from Because He Is by Meghna Gulzar, published by HarperCollins India.)