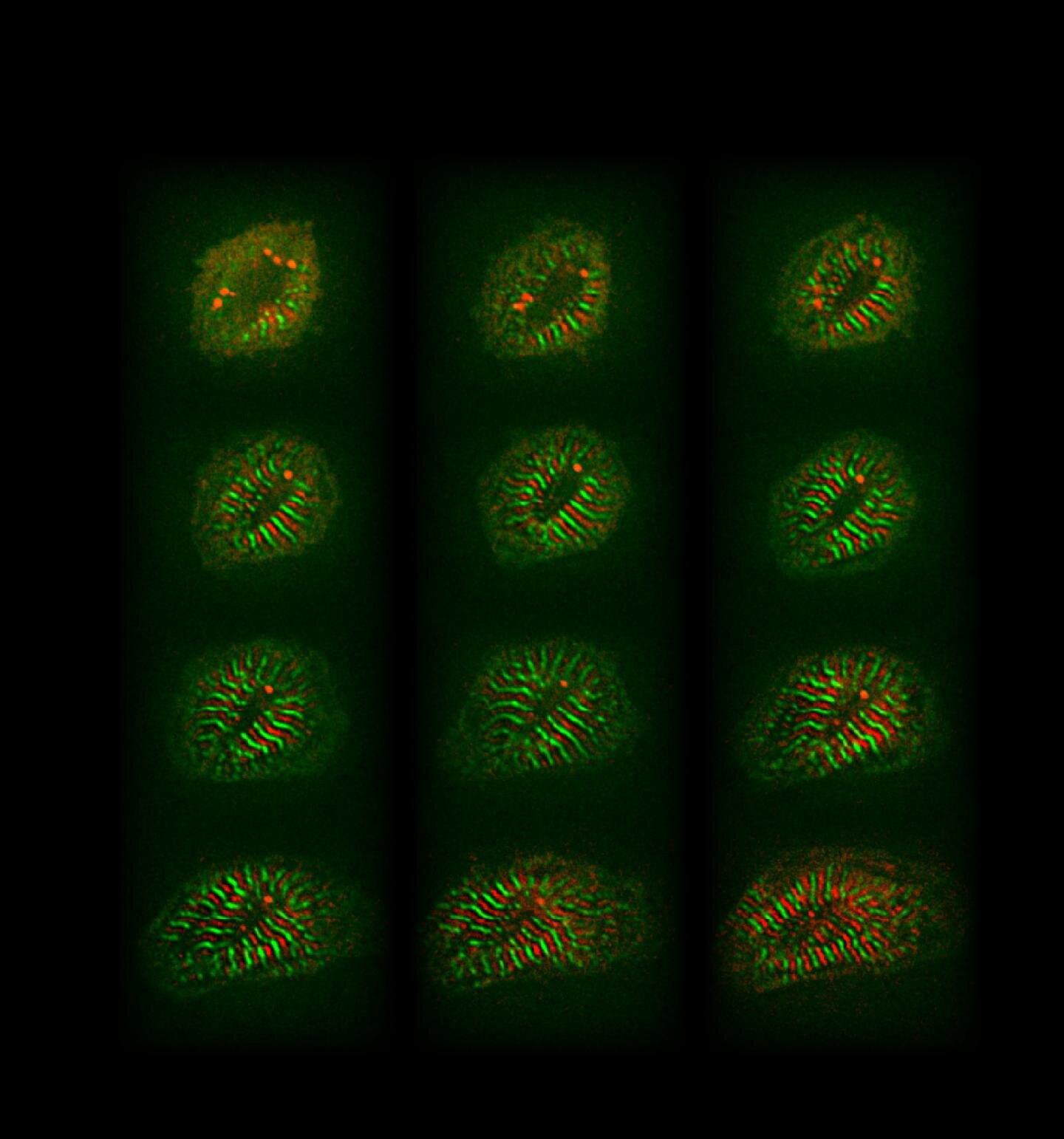 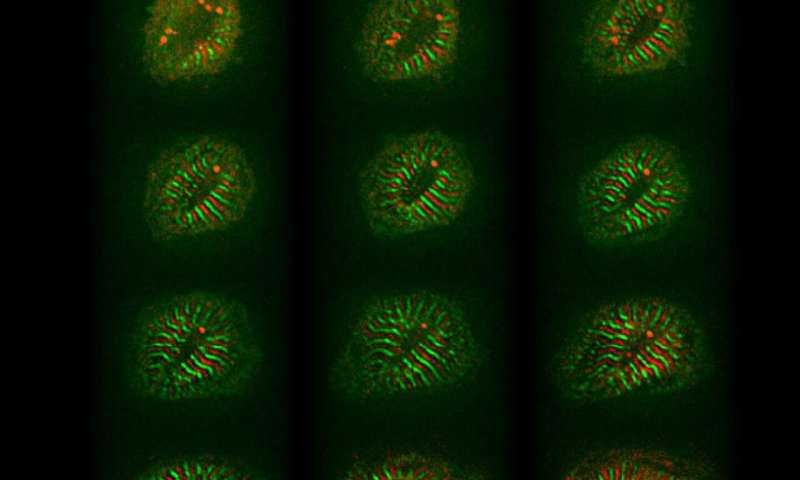 Using new high-resolution imaging techniques, MDC researchers and colleagues have tracked titin, the body’s largest protein, in real time throughout its entire lifecycle. The method and results could provide new insight into muscle development as well as treating damaged muscles and heart disease.

As twinkling lights brighten the holiday season, Max Delbrueck Center for Molecular Medicine researchers are cheered by red and green lights for an entirely different reason. Using colorful probes, a team has tracked the full lifecycle of titin, the body’s largest protein known to play a key role in muscle tissue. Observing titin from synthesis to degradation has provided novel insight into the formation of sarcomeres, the main contractile units of heart and skeletal muscle. The results were reported in the journal Proceedings of the National Academy of Sciences (PNAS).

Titin is such a large molecule that its analysis provides unique challenges. The team attached red and green fluorescent tags to opposite ends of the protein, enabling them to observe titin’s precise movements in muscle cells derived from the mouse heart, called cardiomyocytes.

“Cardiomyocytes are highly specialized and cannot skip a beat,” said Michael Gotthardt, who heads MDC’s Neuromuscular and Cardiovascular Cell Biology Lab and spearheaded the research. “We can watch how titin is made and inserted into the myofilament while everything is still working. It’s beautiful to see.”

Not just a pretty picture

The insight gained from being able to watch titin in real time is significant. Titin has long been assumed to be the rigid backbone of sarcomeres, the basic functional segments of heart and skeletal muscles that expand and contract. It turns out that titin is much more dynamic than previously thought, Gotthardt said.

Heart muscle cells appear to have a pool of soluble titin spread throughout the sarcomere, ready to replace proteins damaged in the repetitive process of muscle expansion and contraction. Overextended proteins are moved out of the cells and then degraded. All of this happens over the course of a few hours, which sounds fast, but is actually much longer than for any other sarcomeric protein. 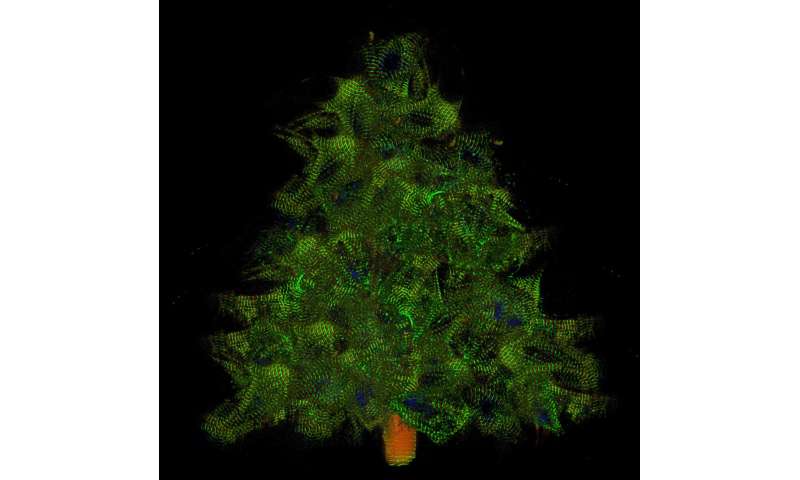 The large amount of titin located outside the sarcomere was a surprise, seen for the first time thanks to the new genetic mouse model and imaging technique, Gotthardt said. Another unexpected finding was the diversity of titin molecules, called isoforms, that were observed. Faster moving proteins are likely different isoforms than slower moving ones.

“This is a look at the real life of the sarcomere,” Gotthardt said. “We can understand the formation and remodeling of the myofilament structure, which has relevance to human disease and development.”

The fluorescent probes can help researchers study how muscles rebuild themselves after exercise, or how heart muscles remodel after a heart attack. They might also help to better understand heart diseases associated with mutations in other sarcomeric proteins, said Franziska Rudolph, first author of the paper.

“This is amazing, to follow endogenous titin variants in real time from start to finish,” Rudolph said. “So many experiments are possible with these mouse models and different imaging techniques.”

For example, the technique could potentially be used to track implanted cells to see how well they are integrating with the native muscle fiber, and if they properly connect with their new neighbors to work as a unit or not. Such insight could show if cell based therapies are effective.

Validating the novel tools and establishing methods for image analysis was a challenge and required the collaboration with colleagues from MDC’s Berlin Institute for Medical Systems Biology, University Medical Center Goettingen, and the University of Arizona. The team worked hard to show how the fluorescent proteins, which are genetically generated, had no unexpected side effects on muscle or titin development and function. 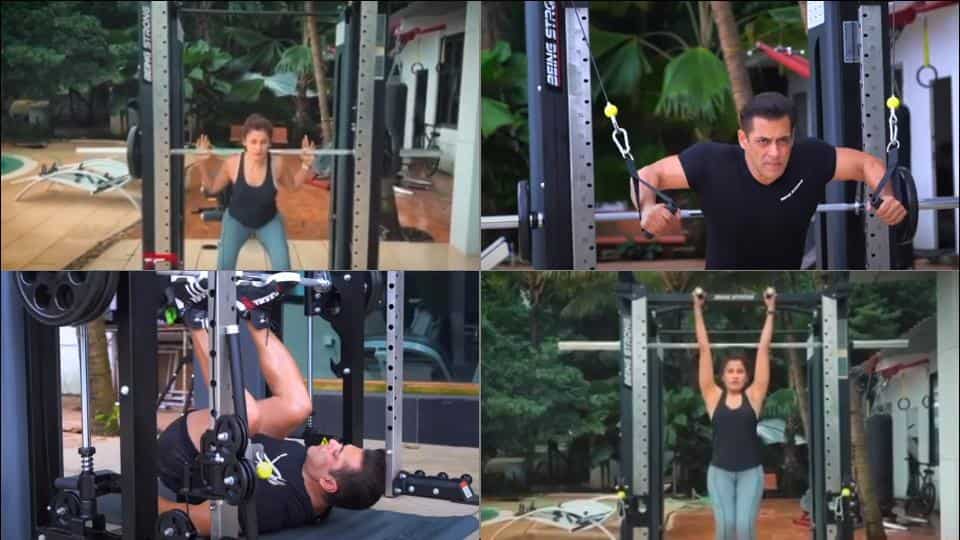