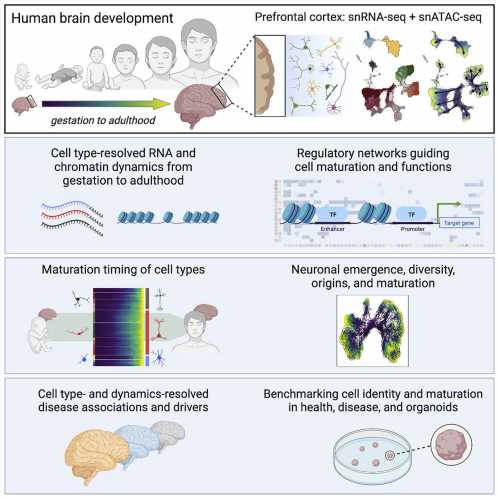 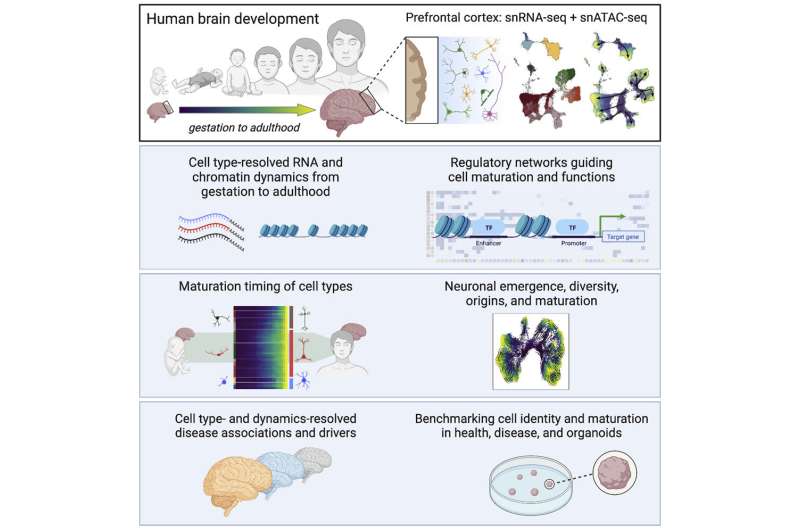 Australian scientists have developed a world-first map showing gene activity changes in diverse human brain cell types from pre-birth to adulthood. By having this map of normal brain cell development, researchers will now be able to identify altered states more accurately in neurological and psychiatric disorders such as schizophrenia, or aberrant cell states in diseases such as brain cancer.

This world-first map of the gene activity changes that occur in the diverse cells of the brain during development from before birth through to adulthood has been developed by a team of Perth researchers at the Harry Perkins Institute of Medical Research and The University of Western Australia.

The research, which has been published in the journal Cell, was spearheaded by postdoctoral researchers Dr. Chuck Herring, Dr. Rebecca Simmons, Dr. Saskia Freytag and Dr. Daniel Poppe, and led by Professor Ryan Lister who is recognized for previously generating the first comprehensive maps of the human epigenome.

“This high-resolution map shows how the gene activity of each different type of brain cell in the prefrontal cortex changes as we mature, from mid-gestation through to adulthood in normal individuals, and predicts the cellular factors that control these changes,” Dr. Chuck Herring said.

“Without a map of normal development, we don’t have a reference to identify what is abnormal, and how it might contribute to brain disorders.”

By having this map of normal brain cell development, researchers will now be able to identify altered states more accurately in neurological and psychiatric disorders such as schizophrenia, or aberrant cell states in diseases such as brain cancer.

“Our previous research assembled maps of how the epigenome changes during human brain development. Our new study now focuses on how gene activity and its controlling factors change as we mature,” Professor Lister said.

Our brains contain many billions of cells, and a huge diversity of different cell types, each with their own specialized functions. But this takes a long time to build, with brain maturation continuing into the third decade of life.

“Through this long process our cognitive abilities emerge, grow, change, and advance. Think of the enormous differences in what an adult can do, compared to a child, toddler, or newborn,” Professor Lister said.

“Underpinning these advances are complex changes in the cells of our brain, as they migrate, grow, form and refine connections, and communicate. Importantly, these changes require the correct control and timing of gene activity, and our new work provides the first reference map of this.”

“Before now, there was a major gap in our knowledge of gene activity and factors controlling it in the brain between birth and adulthood,” Dr. Rebecca Simmons explained.

“We obtained post-mortem brain tissue from neurotypical individuals and used new technologies for mapping gene activity at single cell resolution to track each individual type of cell as we develop and age,” she said.

“These maps are helping us to better understand brain disorders, and to develop improved models of brain cells for modeling diseases and new drug discovery,” Professor Lister said.

Dr. Daniel Poppe said, “It will be a great resource for neurologists, neuroscientists, and those working in developmental biology. Most disorders affecting the brain progress over time, so these findings could allow researchers to identify initial events before these diseases manifest. This would enable earlier intervention in the future.”

Professor Lister is a pioneer in the field of epigenomics, the study of the molecular code that controls gene activity. He generated the world’s first comprehensive maps of the human epigenome, and his ground-breaking research in plant and animal systems has advanced our understanding of genome regulation, stem cell biology, and brain development.