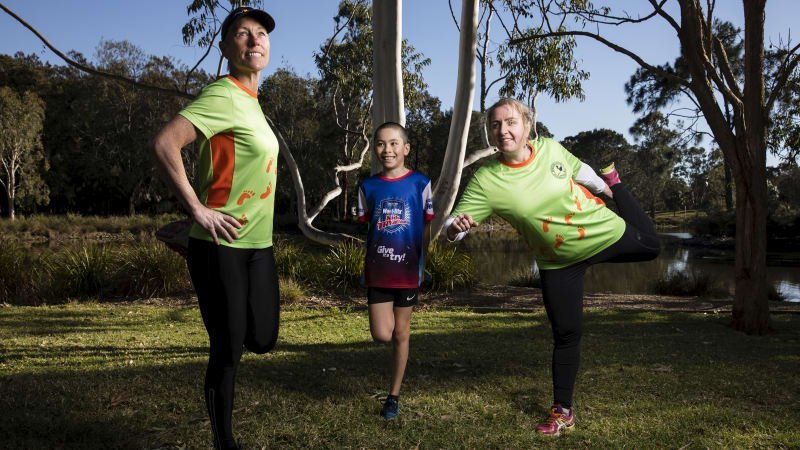 When Jeanne-Vida Douglas took up running at the age of 32, she had two small children at home and no time to spend on a fancy gym routine.

"The thing about running was that all I needed was sneakers," says Douglas. "At any time of the day or night, as long as there was someone home to watch the kids, all I needed was to put my sneakers on and I could go outside the front door and have a run." 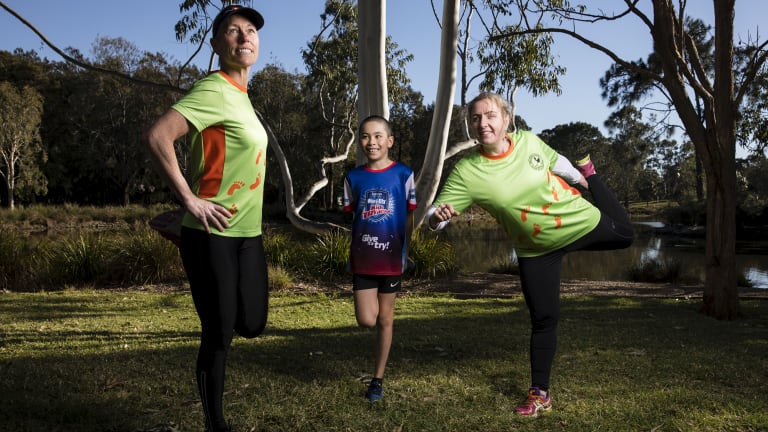 Sue White, Adam Ching and Jeanne-Vida Douglas stretch after running at the Westies Joggers Clubhouse at Mirambeena Reserve in Sydney.

At first she couldn't run for more than a minute without collapsing and it took a year to build up to five kilometres. She soon realised the benefits for her mental as well as physical health, to alleviate stress and stave off insomnia.

When she discovered a long run could generate a high – "I felt like I was flying and I could run forever" – she got the running bug and her runs grew longer. She completed her first marathon at the age of 37.

Douglas is not alone. There's a huge growth in the number of women and girls running, and the flexibility of the sport seems to be appealing for mothers in particular.

The upcoming Sun-Herald City2Surf, presented by Westpac, is a good illustration of the trend. When the iconic race from the Sydney CBD to Bondi Beach started in 1971, just 2 per cent of participants were female. It took decades, but it hit 50/50 in 2006 and has stayed there ever since.

Sue White, 52, will be running the City2Surf next week for the third time. She's volunteered as a marshal on the starting line with friends from her local running club, Western District Joggers and Harriers, aka "Westies", in Georges Hall, but plans to run the race alone.

White, who grew up in England, took up running in her 40s. She was overweight, with two children under three, when she decided to try a fun run.

"I went and did it and just loved it," she says. "It's really hard when you are out of shape to get started, and I was really slow, but the euphoria of the finish just blows your mind. It was something I'd achieved on my own through sheer determination."

White, who plans to follow the City2Surf with the Melbourne marathon, routinely gets up at 4.30am to pump out 10 kilometres before returning home to get the children ready for school and herself for work. Her husband and children join her on weekends.

Douglas, a club officer at Westies, says historic photos suggest men dominated when the club was founded 50 years ago. Nowadays, she thinks the gender split is about even, with a mix of ages and abilities.

Another rapidly growing community running event is Parkrun, a free five-kilometre run every Saturday in parks all over Australia, including more than 20 in Sydney.

Parkrun Australia chief executive Tim Oberg says participation at the 319 events around Australia averages 58 per cent of women to 42 per cent of men. Often multiple generations of the same family run together.

"We've found the mother is often the decision maker about what will be happening on that Saturday morning time slot," Oberg says. "It's an affordable family friendly activity and it's safe."

Young women are increasingly being introduced to running at school. A number of school teams compete in the City2Surf, including girls' schools such as Ascham and MLC Burwood.

By far the biggest school contingent is The Armidale School, which is bringing down 271 students and teachers by coach. This includes 52 girls, which is proportional to the female student population since it's only the school's third year of co-education.

The Australian Islamic College of Sydney in Mount Druitt will have a team of about 35 teachers and students, including seven year 11 girls and seven women staff members. The girls will wear a hijab with their activewear.

English teacher Campbell Harvey says the aim is to engage all students in a new experience and empower the girls.

"It's about encouraging girls to get out there and participate in activities that might have been seen as a male-dominated sport to show them they have just as much right and capability to participate in these sports and enjoy them," Harvey says.

Susie Power, 43, won the City2Surf in 2001 and 2002 and still holds the women's record of 45:08. These days, Power, a single mother of six, is a personal trainer and running coach based in Melbourne.

"There are a lot of mums out there with goals of running a half-marathon or a marathon these days, so I help them with their goals and general fitness," Power says.

Power says women's endurance improves after childbirth, but they also have to be more careful of injury because of potential pelvic instability.

The Boston Marathon this year bore out the theory about women's endurance. The 2018 event had some of the worst weather in decades and the drop-out rate for men was up almost 80 per cent from 2017, while the drop-out rate for women was up 12 per cent, The New York Times reported. Overall 5 per cent of men dropped out, compared with 3.8 per cent of women, a trend that held true at the elite level too.

The City2Surf is on August 12. Register online.