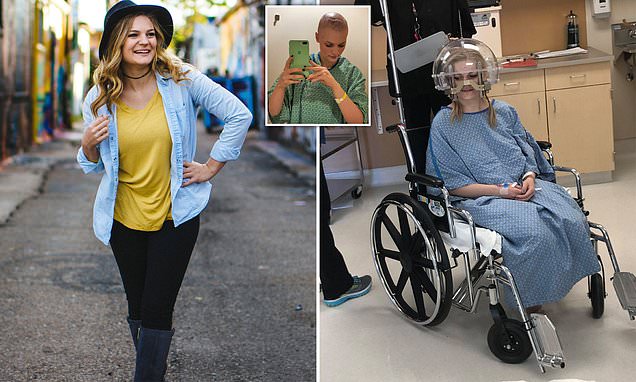 Woman, 20, discovers headache and flu symptoms are caused by FIVE brain tumours which spread from a mole she had removed a year earlier 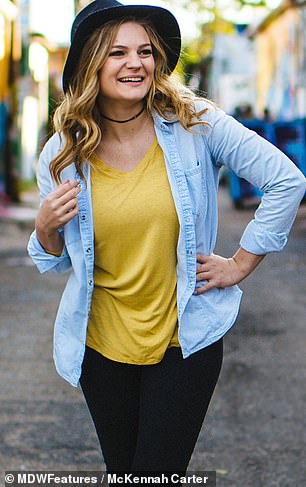 McKennah Carter, 20, was horrified to learn her relentless headaches were caused by five cancerous tumours in her brain

A woman who passed off her relentless headaches as the flu was horrified to learn they were caused by five tumours in her brain.

McKennah Carter, 20, had a malignant mole removed from her back in 2017 after being diagnosed with stage one melanoma, or skin cancer.

She presumed she would remain cancer-free when medics told her they’d caught the killer disease before it could spread.

But a year later, Ms Carter started to experience flu-like symptoms and migraines which lasted an entire month.

She became suspicious there could be a more sinister cause and took herself to hospital.

An MRI revealed she had five brain tumours – the largest of which was an inch-long.

A subsequent CT scan discovered the cancer had also spread to her liver, lungs and bones.

She was diagnosed with stage four skin cancer – the deadliest kind – which had spread from the mole on her back. 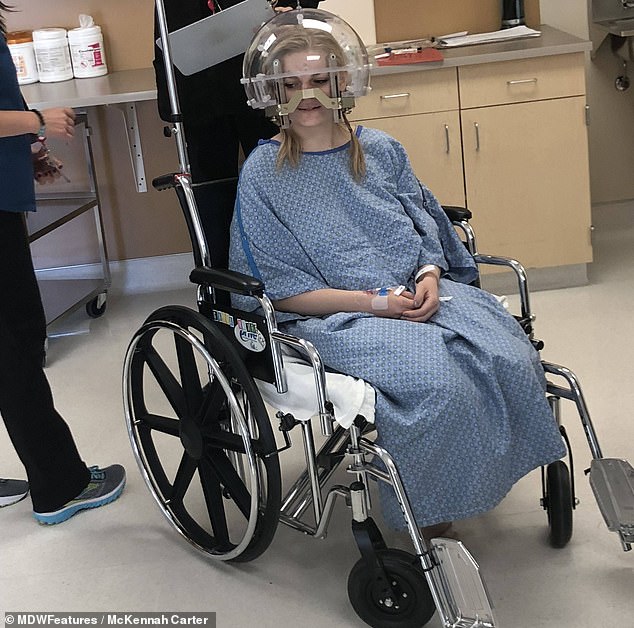 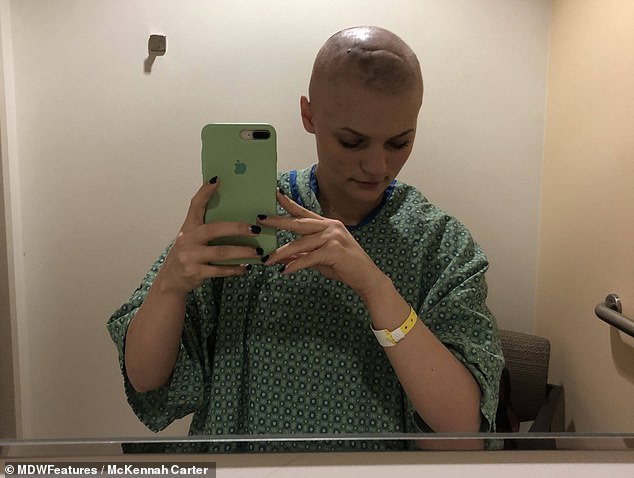 She had a malignant mole removed from her back in 2017 after being diagnosed with stage one melanoma, or skin cancer, but was told it was ‘extremely unlikely’ it would return (pictured after brain surgery) 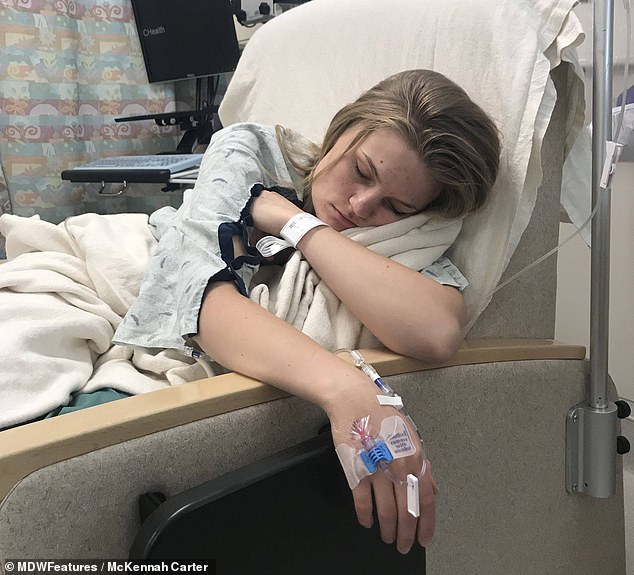 But a year later, an MRI and CT scan revealed the melanoma had spread from the mole on her back to her brain, liver, lungs and bones

Ms Carter, from Colorado, said: ‘In 2017 I was diagnosed with stage one melanoma after finding a cancerous mole on my back.

‘At the time I was very private about it and almost embarrassed. I didn’t want people to view me as the girl with cancer.

‘I was told that the chances of it ever coming back were extremely unlikely. Most likely I would never have to worry about it for the rest of my life.

‘Almost exactly a year later, they [doctors] did an MRI of my brain and discovered five brain tumours.

‘CT scans and biopsies later that day revealed the cancer had not only spread to my brain but to my liver, lungs, bones, and lymph nodes. Feelings of disbelief flooded my mind.’

Ms Carter started receiving radiotherapy to kill off the cancer cells immediately following her diagnosis – but the tumours persisted and her condition deteriorated.

Last December she was forced to have her first brain surgery to remove a tumour that had started to bleed.

By February she had her second operation to remove one that was putting pressure on her optic nerve and affecting her vision. 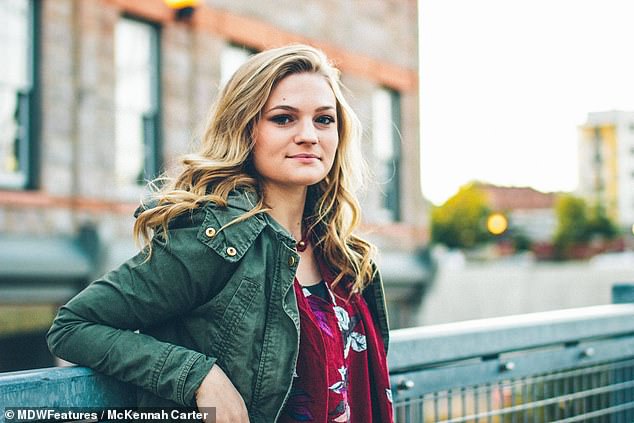 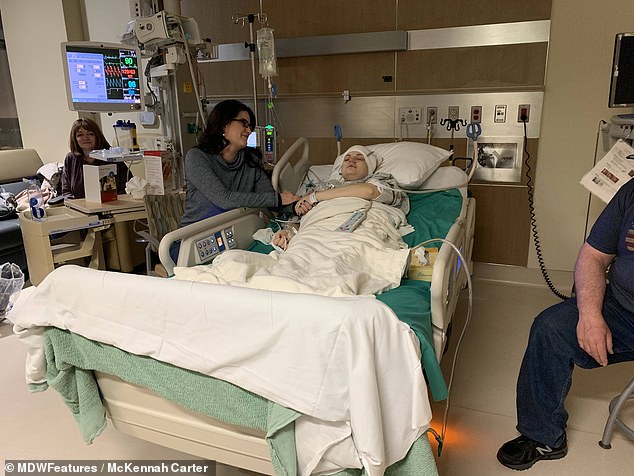 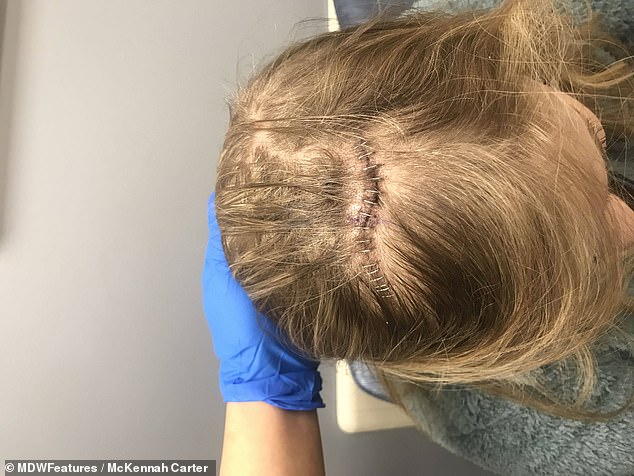 But in April, doctors told her the treatments were not working and a tumour in her liver was continuing to grow. They told her to prepare for the worst.

Ms Carter said: ‘For the first time, I felt like I could actually die. It may surprise some people but regardless of my diagnosis I never really questioned the fragility of life or the possibility that my life might be cut short until this point.’

As a last resort, Ms Carter signed up for a clinical trial of tumour infiltrating lymphocyte therapy (TIL) in October.

The treatment involves removing patients’ T cells – cancer-fighting cells released by the immune system – and growing them in large quantities in a lab.

After being harvested for a fortnight, they are then transferred back inside the sufferer. In higher numbers, T cells are stronger at fighting off aggressive tumours.

TIL halts the progression of tumours in around 16 per cent of patients. But despite her slim odds, Ms Carter is staying positive, and even claimed the diseases have made her a stronger person.

She said: ‘It has helped me become a stronger, braver, and more peaceful person. It has produced within me a perseverance during suffering.

‘It has also given me a compassion for others and an understanding of others suffering I never would have had.’ To follow Ms Carter’s journey, click here

WHAT IS MELANOMA AND HOW CAN YOU PREVENT IT?

Melanoma is the most dangerous form of skin cancer. It happens after the DNA in skin cells is damaged (typically due to harmful UV rays) and then not repaired so it triggers mutations that can form malignant tumors.

Around 15,900 new cases occur every year in the UK, with 2,285 Britons dying from the disease in 2016, according to Cancer Research UK statistics.

The patient can decide to use a skin graft if the surgery has left behind discoloration or an indent.

This is needed if the cancer reaches stage III or IV. That means that the cancerous cells have spread to the lymph nodes or other organs in the body. 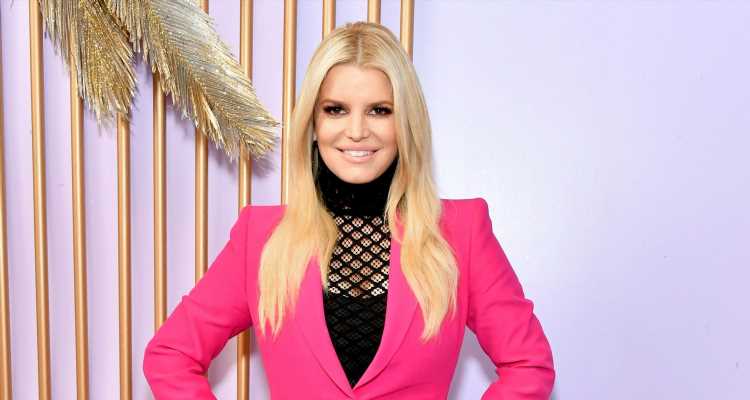