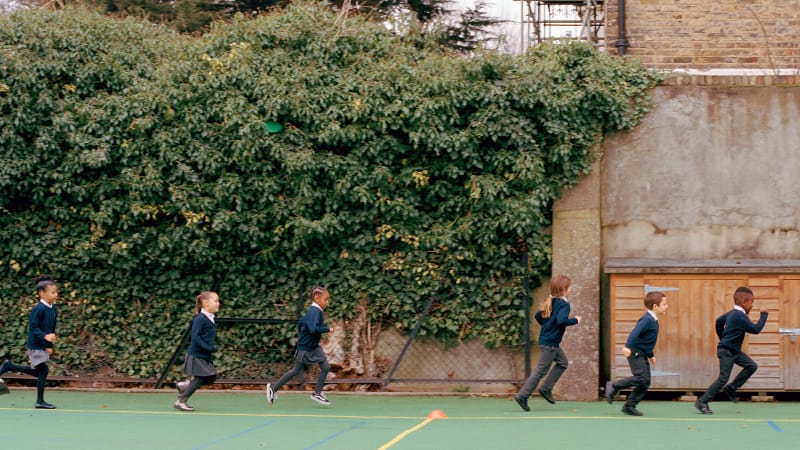 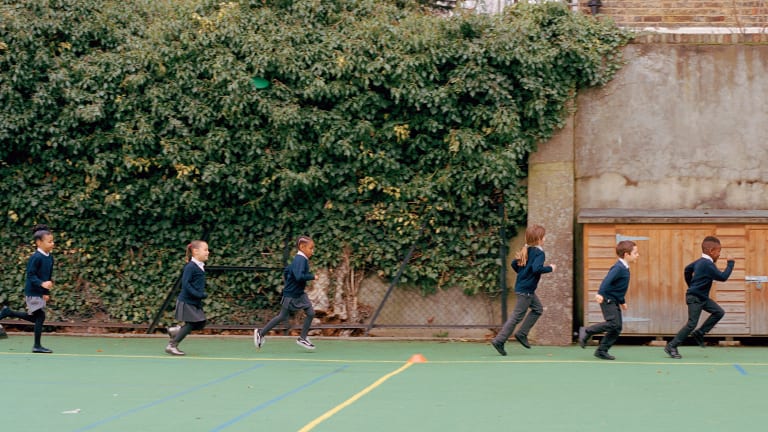 Children at a north London primary school during their 15-minute Daily Mile exercise.

On a bright morning earlier this year, Freya Stevenson Smith, a teacher at St John's Upper Holloway, a Church of England primary school in north London, asks her year 1 class to line up in the playground. The children are excited, as five-year-olds on the verge of a mysterious new activity are apt to be. Before leading them out, Stevenson Smith reminds them of what is about to happen. "Who can tell me what we're doing this morning?" she asks.

"The Daily Mile!" they answer.

"How does exercise make us feel?"

"It makes us feel good about ourselves!"

Despite its name, the Daily Mile is a measure of time, rather than distance. Most children run a mile (1.6 kilometres), or slightly more, during the time, but it is not mandatory. Participants are encouraged to run or jog, but a bit of walking is not forbidden. The crucial things are that everyone does it, and it happens every day, rain or shine (but not in icy conditions). There is no kit, no fixed time of day and no competition.

Stevenson Smith counts down from three and her class speeds off. One or two sprint round in an initial race, but after a couple of laps it is impossible to identify any winners or losers. The initial energy quickly wears off. Some start to cut corners. Dawdlers emerge, first walking and then stopping altogether. There is a little tripping and sliding. After six or seven minutes, the children begin pleading in earnest. "My knee hurts!" "I need a drink!" "I'm tired …"

Stevenson Smith joins in to encourage the stragglers. "You can all have some water at the end," she says. A few, boys and girls are now holding hands and strolling at the back, as if approaching a zebra crossing in crocodile formation. She shouts, a little more firmly: "It's not a social event!"

Afterwards, Stevenson Smith assesses them. They are less fit than she thought. "Fifteen minutes is longer than you might think," she says, "but I didn't think they'd find it so hard." Since moving to London from Australia last year, she has been surprised by the relative lack of physical activity among children and adults. She had read about the Daily Mile back home. When someone from Islington Council suggested it to her as a possible program for her class, she was happy to try it out.

"I'd noticed that I'd become more sedentary too, and had to make more of an effort to get outside. Children spend so much time in front of screens – and living in a big city like London, parents are hesitant to let their kids go outside and play and be free."

Stevenson Smith is far from the only teacher determined to take action against what is becoming one of the West's most urgent problems, and the Daily Mile phenomenon is sweeping schools. National Health Service data in the UK has shown that by the time children leave primary school, nearly one third are overweight or obese. The issue is especially bad in more deprived areas, a pattern also seen in Australia. Eighty per cent of school-aged children aren't meeting daily exercise recommendations, according to the Australian Institute of Health and Welfare. Obese children are more likely to become obese adults, and obesity is linked to many other conditions, including type-2 diabetes, asthma, hypertension and some types of cancer. Fitter children have been shown to perform better academically, too.

The Daily Mile seems to offer the best recent hope of solving the problem. Since it began in 2012 it has been taken up, officially, by more than 4500 schools around the world. The real figure is probably higher, since there is no obligation for schools to report when they are starting the scheme. In Scotland, where the Daily Mile originated, it's estimated that nearly half of primary schools are now doing it. The initiative has spread as far as Australia and the United Arab Emirates, with schools from more than 30 countries taking part.

With the patient manner born of a long career in schools, and a warm Scottish burr, Elaine Wyllie does not have a revolutionary air. Yet it was she who came up with the idea of the Daily Mile at St Ninians primary school in central Scotland's Stirling, where she was head teacher.

"One of our volunteers turned to me and said just six words," she recalls of a conversation after an assembly in 2012. "'Elaine, the children are not fit.' I looked and I knew he was right." The PE teacher agreed, and so did the children themselves. "One of the boys said he 'couldnae run the length of hisself'. So I said to the head of PE, 'Why don't you take them out every day for 15 minutes and run them round the field?'"

Within a month, it was clear to Wyllie she had struck on something. Children were coming back in from the run happy, rosy-cheeked and ready to learn.

Primary schools, and the teachers who work in them, are offered countless interventions to try to improve children's levels of physical activity, but it is hard to make them stick. They don't want to skip, or do daily sprint tests. And alongside a crowded curriculum, time is precious. Yet from the start, the Daily Mile was different. Within four weeks, the children at St Ninians were noticeably fitter. Their concentration in class improved, as did their general behaviour. The school started to "win everything" at inter-schools sports competitions. Observers from Education Scotland said the children even had better running style, purely from the practice they were putting in.

"You don't start shouting from the rooftops, but I knew in those first few months we had broken the mould," says Wyllie. "We had discovered something sustainable."

The Daily Mile was the holy grail of interventions: it was popular, effective and, crucially, free. Wyllie won a Pride of Britain Award as more and more schools started to take it up. Jim Ratcliffe, a chemicals billionaire with a running charity of his own, got in touch. He offered financial support to help Wyllie and her husband, John, set up a website and help spread the word. Having planned to retire, John and Elaine now instead find themselves travelling around the country and further abroad, presenting to politicians and public health officials. In Scotland, the government and health authorities wrote to primary schools, suggesting the Daily Mile. If the current rate of progress continues, it seems likely the Daily Mile could become part of every child's day in the UK.

"It can be a bit hard to take in, when you think of all those thousands of children taking part," Wyllie says. "But it's exciting. If you get the child right, the adult falls into place. When I was growing up we were always outside playing in the fresh air, and I like to think the Daily Mile gives the children a bit of 1955. Inequality vanishes: you don't need the playing fields of Eton." Typically, the main obstacle to the Daily Mile is not having a big enough space for the laps, or not wanting to have children run behind buildings, out of sight.

While there is no shortage of anecdotal evidence for the success of the Daily Mile, the kind of hard science that might see it becoming compulsory has been thinner on the ground. A report on a three-month pilot inspired by the Daily Mile, where 76 children at Coppermill school in east London ran for 15 minutes three times a week, found improvements to fitness, self-esteem, and wellbeing and satisfaction. Their SAT results – national curriculum assessments – were significantly higher than expected.

More research is ongoing. Dr Colin Moran, a senior lecturer in sport at the University of Stirling and a former St Ninians pupil, has been involved in two studies of the effect of the Daily Mile. Last year he helped lead a BBC-sponsored Terrific Scientific survey of the effect of exercise on 12,000 children's concentration across the UK. Pupils were invited to report their own results, using an online survey. They were first split into three groups. One set was asked to do nothing, another did a "bleep test", where children must try to keep pace with ever-quickening bleeps, which tires them out nearly to exhaustion. The third set did a "self-paced" activity: that is, running or walking a daily mile. The last made even more difference than the bleep test. Reaction times, cognition and wellbeing were all improved.

Moran is clear about the need for cautious, level-headed research. For many parents the Daily Mile, simply by getting children outside in the fresh air, would be welcome even if it showed – at minimum – that it wasn't detrimental to their health or performance. Yet from a scientific point of view, there has to be a clear benefit if it is to take up valuable time in the day.

"For young children, 15 minutes can easily become half an hour, once you've checked their shoelaces and got their coats on, and over the course of the year that time adds up," he says. "There has to be a clear advantage to doing this." All the results so far suggest that there is.

Moran thinks that the social aspect is one important distinction between the Daily Mile and other forms of school sport. Running repeated short laps means children doing their mile are often running next to each other, so can talk, and there are no winners. As Wyllie points out, when asked to remember a happy time from childhood, most of us picture a moment when we were outdoors, playing with other children. Yet for less athletic children, memories of school sport are often anything but happy. The Daily Mile can be done by anyone. Children in wheelchairs can be pushed around and feel they are participating.

"I think that's an important distinction," Moran says. "Since we've started I've had emails from teachers saying, 'We think the Daily Mile is great; we have a similar activity at our school.' Quite often that activity is a cross-country club. They might get 50 pupils out of 150. That's not the Daily Mile at all. The Daily Mile is the whole class."

As to why exercise seems to have such a wide-reaching impact, Moran admits, "We don't really know. It changes the blood flow and improves the fuel supply of sugars and fats, and alters the hormones. It could be all sorts of things. But the difference between the bleep test and the Daily Mile is that the Daily Mile is a social activity."

Back at St John's Upper Holloway, four weeks after that first, somewhat chaotic mile, Freya Stevenson Smith reports back on her class's progress. The children run straight after the class roll is taken. Gradually they have grown used to it. They say it makes them feel "fit and fast", or "happy, because it's hard".

"It has been interesting to watch the children becoming more aware of sensations in their bodies," Stevenson Smith says. "They talk about 'their red, hot face', 'big heartbeat' and 'tired legs'. I've also noticed an improvement in their resilience. Now, when they trip over, they get straight back up and keep running. They take fewer breaks. We've started counting their laps, and they are all keen to beat their own records. It took about a week for the routine to get settled, but after that I noticed them working in class in a more focused manner. It's also helping us to foster a supportive social environment. The kids have naturally started encouraging one another to persevere. They're excited to get going."

Edited version of a story first published in The Telegraph (UK)

To read more from Good Weekend magazine, visit our page at The Sydney Morning Herald or The Age.