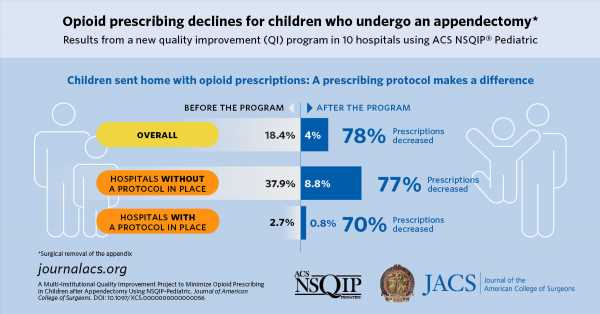 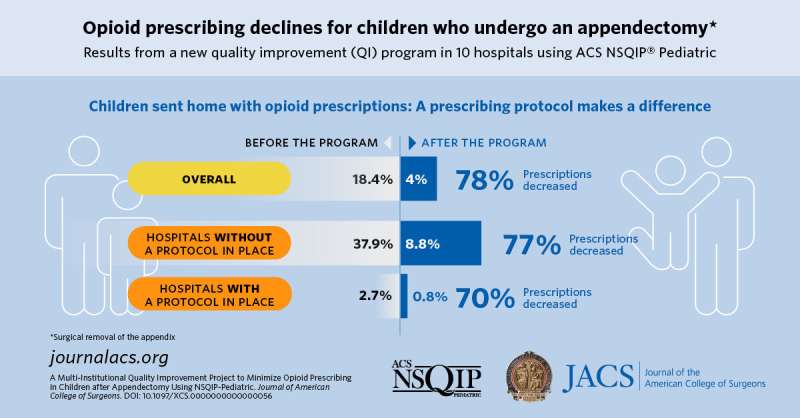 As public awareness of opioid abuse in the U.S. has grown, so too have efforts to reduce—or even eliminate—the use of opioids after various types of operations. A regional quality improvement (QI) effort to reduce opioid prescriptions in children who have undergone an appendectomy has led to an almost 80% reduction in prescribing. The study involved implementing a standardized prescribing protocol that aimed to significantly curtail opioid prescriptions for these young patients.

“We were able to demonstrate that we could minimize opioid prescribing and at the same time still show there was no increase in emergency room visits after surgery or that families were dissatisfied with pain management,” said lead study author Lorraine Kelley-Quon, MD, MSHS, FACS,  pediatric surgeon at Children’s Hospital Los Angeles, and assistant professor of clinical surgery and population and public health sciences at Keck School of Medicine of the University of Southern California.

Study results from this QI initiative at 10 children’s hospitals in the western U.S. have been published online in the Journal of the American College of Surgeons. The study included 1,524 children who had appendectomies at the 10 hospitals; all are members of the Western Pediatric Surgery Research Consortium.

Appendectomy is the most common operation in hospitalized children. “We wanted to do a project to minimize the variation in opioid prescribing for children that undergo appendectomy. The way we wanted to do that was to use an already existing data infrastructure, the American College of Surgeons National Surgical Quality Improvement Program Pediatric platform, to streamline that process,” Dr. Kelley-Quon said. Developed in collaboration with the American Pediatric Surgical Association, ACS developed the pediatric version of NSQIP specifically for specialties in children’s surgery. Similar to ACS NSQIP, the pediatric program enables participating hospitals to collect highly reliable clinical data and compare their surgical outcomes with the outcomes of other participants in the program.

Previous studies have found that typically half or more of opioid prescriptions families receive after surgery go unused. “There has been a great amount of data in the last few years that have shown that most children undergoing surgery who receive an opioid prescription receive more opioids than are actually necessary,” Dr. Kelley-Quon said. She noted that half of the hospitals in the study already had a protocol in place to minimize prescribing opioids to children after appendectomy, but the remainder had no standardized protocol for prescribing opioids and the practice varied among surgeons.

After the QI program was implemented the researchers reported that:

The researchers note that some providers send children home after an appendectomy with opioid prescriptions to prevent emergency room visits for pain flares, even though another study reported that children who received opioids had higher rates of ER visits a month after surgery. In the study by Dr. Kelley-Quon and colleagues, ER visits were essentially unchanged after the QI program:

“The study provides important information for both pediatric and general surgeons, as both specialists perform appendectomies and other surgical procedures for children,” said Mary E. Fallat, MD, FACS, FAAP, professor at the University of Louisville School of Medicine and medical director, surgical quality, at Norton Children’s Hospital in Louisville, Kentucky, who was not involved in the study.

“General surgeons may not be as attuned to advances in postoperative pain control in children’s hospitals. Due to heightened awareness of opioid abuse, many pediatric and pediatric subspecialty surgeons have embraced the concept of moving completely away from narcotic use after outpatient procedures [hernias] and short-stay procedures [appendectomy and cholecystectomy] and recommend acetaminophen alternating with nonsteroidal anti-inflammatory drugs to augment local and regional anesthesia use in the operating room,” said Dr. Fallat, who is also Vice Chair of the ACS Children’s Surgery Verification Program.

Dr. Kelley-Quon noted that use of ACS NSQIP Pediatric was pivotal in implementing the study intervention. “NSQIP has really helped surgeons see how an individual hospital can compare itself with other hospitals in the country,” she said. “What our project did was take that one step farther to enable a group of hospitals to use the platform in real time to really change practice for a specific quality improvement initiative across several hospitals at once.”