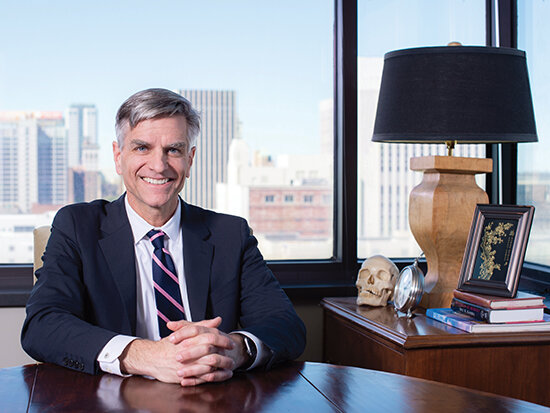 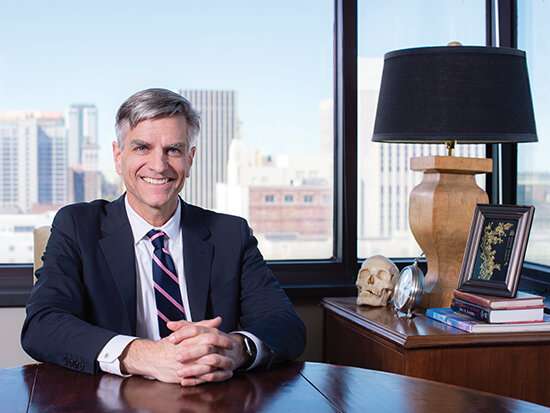 A new study provides additional evidence of the efficacy of virotherapy for glioblastoma, the most deadly type of brain tumor. The research findings, published Feb. 1, 2022, in Clinical Cancer Research, indicate that an oncolytic herpes simplex virus, G207, appears to boost immune response and that this is associated with better overall survival for patients with glioblastoma.

The study, from investigators at the University of Alabama at Birmingham and Nationwide Children’s Hospital, builds on previous trials of G207. The current study further examined findings from an earlier Phase 1b study of six patients with glioblastoma recurrence. The earlier study indicated G207 was well tolerated by the patients. Overall survival, a secondary outcome, was generally but not uniformly improved in the study.

“In this study, we sought to identify biological differences that could describe the variable survival duration associated with G207 virotherapy,” said James Markert, M.D., Ph.D., chair of the Department of Neurosurgery at UAB’s Heersink School of Medicine and a study co-author.

“We performed RNA sequencing from pre- and post-G207 treatment tumor biopsies to investigate changes in gene expression during the treatment interval. We hypothesized that gene expression indicative of an active immune response would be characteristic of patients with improved survival.”

The research team found that the adaptive immune response differed between patients and indicated there was an association with this immune response and increased length of survival in patients with recurrent glioblastoma after treatment with G207.

Glioblastomas are central nervous system tumors that are uniformly fatal with median survival of 12 to 15 months from initial diagnosis and four to six months after recurrence. The standard medical care including surgical removal of the tumor, chemotherapy and radiation currently offers limited survival benefit.

Markert says previous research has confirmed that glioblastomas have an immunosuppressive quality, meaning they inhibit the body’s immune system from attacking and destroying the tumor. This allows the tumor to evade the immune system and continue to grow and spread. Chemotherapy and radiation therapy, necessary treatments for the tumor, unfortunately exacerbate suppression of the immune response.

Immunotherapies are an evolving strategy for cancer treatment. They are designed to stimulate the immune system to attack tumor cells and have led to remarkable responses in many cancers.

Markert first became interested in genetically engineered viruses while a neurosurgical resident in a Boston laboratory more than 30 years ago. The lab was involved in testing the first genetically engineered herpes virus as an anti-cancer drug, based on a suitable candidate initially constructed to serve as a vaccine against herpes. The realization followed that the virus might be effective as a means to destroy brain tumors.

In 2001, Markert and his colleagues published initial results of G207, indicating it was safe to use as a sole therapy as well as in combination with radiation for malignant gliomas.

For the current study, Katherine Miller, Ph.D., a research assistant professor in the Institute for Genomic Medicine at Nationwide Children’s and the Ohio State University College of Medicine, looked at RNA extracted from the patients before and after treatment with G207. Analysis of 770 immune response genes representing 24 different immune cell types revealed that G207 treatment, more than any other component, had the greatest effect on immune gene expression changes.

“Specifically, G207 treatment significantly increased the cytotoxic, T-cell, natural killer, macrophage, neutrophil and dendritic cell scores,” said study co-author Kevin Cassady, M.D., professor of pediatrics at the Ohio State University College of Medicine and an infectious diseases physician at Nationwide Children’s Hospital. “We also found that G207 reduced the number of dysfunctional T cells, known as exhausted T cells in that they become tolerant of the tumor they are supposed to attack. Exhausted T cells are one contributor to a poor immune response.”

The investigators also looked to see whether there was a direct correlation between the post-G207 treatment gene expression levels and survival.

“We detected approximately 500 genes that significantly correlated with patient survival and demonstrated that approximately 50 percent of these genes were related to immune response pathways and functions,” Markert said. “Our analysis of immune-cell populations after treatment with G207 revealed associations with patient survival and identified important mechanistic events related to cellular immune infiltrate changes including an increase in the myeloid, cytotoxic and T-cell populations, suggesting a relationship between immune gene response and survival duration.”