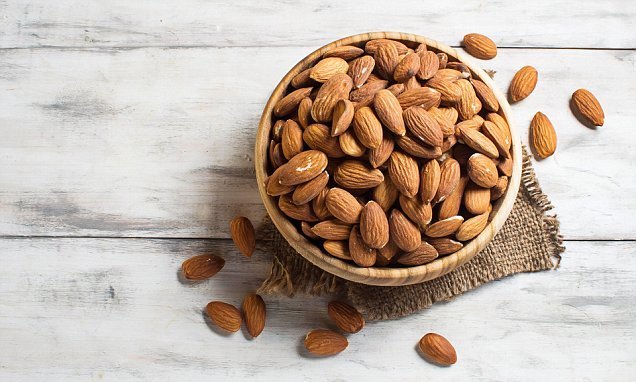 Snacking on almonds is the best way to compensate for skipping breakfast, study of students reveals

Students who miss out on the most important meal of the day have better blood-sugar levels if they choose to snack on the nuts mid-morning, a study found.

Lead author Dr Rudy Ortiz, from the University of California, Merced, said: ‘This study, the first among a university student population, shows that for those who skip breakfast, almonds are a good snack choice.’

The nut has been associated with lower blood pressure and cholesterol levels, as well as reduced hunger and weight gain. 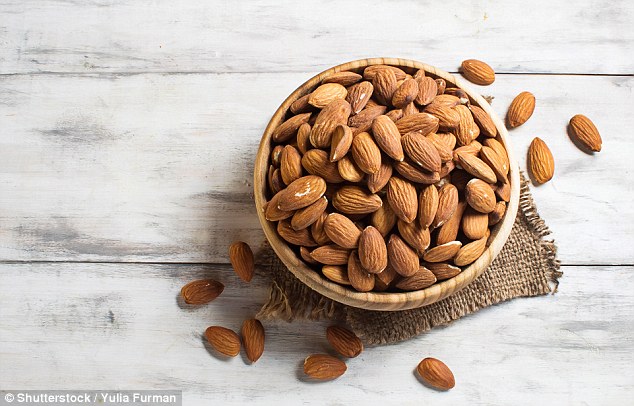 Eating a handful of almonds, hazelnuts and walnuts every day boosts a man’s sperm production, research suggested in July 2018.

Just a 60g daily serving of the mixed nuts improves men’s sperm count by 16 per cent, a study found.

The healthy snack also boosts sperm movement by six per cent, survival by 4 per cent and shape by one per cent, which are all related to male fertility, the research adds.

This is thought to be due to the nuts being rich in omega-3 fatty acids, antioxidants and folate.

Infertility affects around 11 per cent of women and nine per cent of men of a reproductive age in the US. Approximately one in seven couples have difficulty conceiving in the UK.

The researchers believe ‘pollution, smoking, and trends toward a western-style diet’ are affecting sperm health.

The researchers, from the University Rovira i Virgil, Tarragona, Spain, analysed 119 healthy men aged between 18 and 35 for 14 weeks.

Half the men ate a typical western diet, while the remainder had the same food alongside a 60g daily serving of almonds, hazelnuts and walnuts.

Sperm and blood samples were taken at the beginning and end of the study.

University students were chosen due to previous research suggesting between 20 and 43 per cent of them do not eat breakfast.

Some 63 per cent of the participants reported eating breakfast never, rarely or just two-to-four times a week.

The students were split into two groups. Thirty of them snacked on 56g of dry roasted almonds, equaling 320 calories, every day for eight weeks.

The remaining 35 munched on five Graham crackers every day, totaling 338 calories. The snacks were usually eaten at 11am.

All of the participants were told to keep the rest of their diet and exercise regimen the same during the study, which was funded by the Almond Board of California.

The researchers monitored the students on the weekdays to ensure they were eating their designated snacks, and reminded them to do so via text on weekends and holidays.

Plasma samples and weight measurements were taken from the participants at the start of the study, as well as four and eight weeks in.

Results, published in the journal Nutrients, suggest students who munch on almonds have lower blood sugar levels two hours later, as well as 34 per cent less insulin resistance, than those who eat crackers.

Insulin resistance occurs when a person’s cells stop responding to the hormone and is an early sign of diabetes.

Although both the students eating almonds and crackers gained on average 1.7lbs (0.8kg) during the study, previous research suggests weight gain of between 2.2lbs and 6.6lbs (1-to-3kg) is common when people start university.

Results further suggest students find almonds more appealing than crackers when eaten every day, which the researchers claim shows that ‘repeated consumption of a nutritious snack is well accepted over a typical refined carbohydrate snack’.

Dr Ortiz concluded: ‘Almonds’ effect on several health parameters shows their potential as a smart snack, particularly in this group’.

The researchers believe almonds may have greater benefits among people with high blood pressures or large waist circumferences than in the healthy students included in the study.

They also add the study would be more accurate if it had a third group that neither snacked nor ate breakfast.