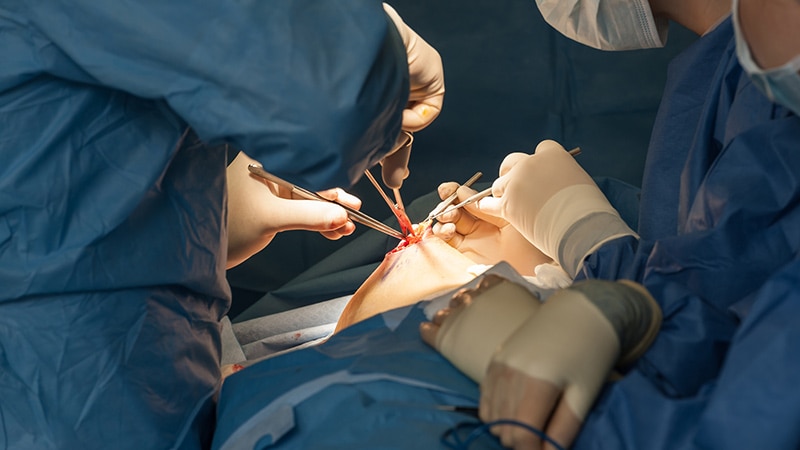 “Remarkable” results from a small study suggest that some women with breast cancer may be able to skip surgery, say researchers.

The finding is based on 31 women with early triple-negative or HER2-positive breast cancer who had a pathological complete response (pCR) to neoadjuvant systemic therapy.

The next step in management would usually be surgery, but these women skipped it and went straight to standard whole-breast radiotherapy. Skipping surgery appeared to be safe. After a median follow-up of 26.4 months, there wasn’t a single local-regional or distant recurrence, the investigators reported.

The study was published online October 25 in Lancet Oncology.

The findings were highlighted in the mainstream press, including The New York Times and Fox News.

The results are “remarkable and quite promising…this is the very beginning of a new type of treatment for select patients,” commented lead investigator Henry Kuerer, MD, PhD, a breast cancer surgeon at MD Anderson Cancer Center in Houston, Texas, in a press release.  However, Kuerer added that “much longer follow-up and further studies will be necessary before this approach can be integrated into routine breast cancer care.”

Experts not involved in the study were similarly cautious.

The “trial is a significant step” but “several key questions remain about long-term outcomes and implementation across treatment settings,” said authors of an accompanying editorial, surgical oncologist Philip Spanheimer, MD, and breast cancer specialist Katherine Reeder-Hayes, MD, both from the University of North Carolina at Chapel Hill.

Response to Neoadjuvant Chemo Is Key

The work builds on the ever-improving effectiveness of neoadjuvant therapy for early breast cancer, which now has complete pathological response rates of 60%-80% for triple-negative and HER2-positive breast cancer, say the authors.

The team enrolled 50 women an average of 62 years old with unicentric cT1–2N0–1M0 triple-negative breast cancer (21 patients) or HER2-positive breast cancer (29 patients). Residual breast lesions had to be less than 2 cm on imaging after neoadjuvant treatment, which included chemotherapy plus/minus targeted agents as determined by the treating medical oncologist.

The response to up-front therapy was assessed by state-of-the-art, image-guided vacuum-assisted core biopsy (VACB) of the tumor bed, with at least 12 cores taken and an average of 15.2 per patient.

Following radiation, the 62% of women (31/50) who had complete responses were followed closely for recurrence, including mammograms every 6 months. Nine patients subsequently underwent additional biopsies.

The study allowed node-positive disease, but women had to have no more than three abnormal nodes on ultrasound, and they were clipped before chemotherapy to ensure removal.

There were no serious biopsy-related adverse events or treatment-related deaths.

No Firm Conclusion So Far

Although the editorialists said the approach has potential, they are concerned about how it would transfer into real-world settings.

Some teams have not been as successful as the investigators at using VABC to detect residual disease, they point out.

Indeed, some women might “question whether the process is a worthwhile trade-off to avoid surgery, particularly if they are facing a straightforward breast-conserving procedure,” the editorialists commented.

In addition, the pathological complete response rates after neoadjuvant therapy in this study were higher than in some previous reports, which raises the “troublingly” possibility of false-negatives and follow-up that was too short for occult disease to manifest as recurrence, they said.

Overall, Spanheimer and Reeder-Hayes conclude that the study is simply too “underpowered” and the results too “immature” to draw any firm conclusions.

“Ultimately, the ability to accurately predict residual disease status and show the feasibility of such techniques across multiple practice settings will be needed to incorporate surgery-sparing approaches into breast cancer treatment,” they write.

The study was funded by the National Cancer Institute and MD Anderson Cancer Center. Several investigators had industry ties, including Kuerer, who reported consulting fees from Merck, serving as an editor for the NEJM Group, and receiving royalties from McGraw-Hill and Elsevier. The full list can be found with the original article. Editorialists Spanheimer and Reeder-Hayes reported grants from Pfizer.

M. Alexander Otto is a physician assistant with a master’s degree in medical science and a journalism degree from Newhouse. He is an award-winning medical journalist who worked for several major news outlets before joining Medscape. Alex is also an MIT Knight Science Journalism fellow. Email: [email protected]