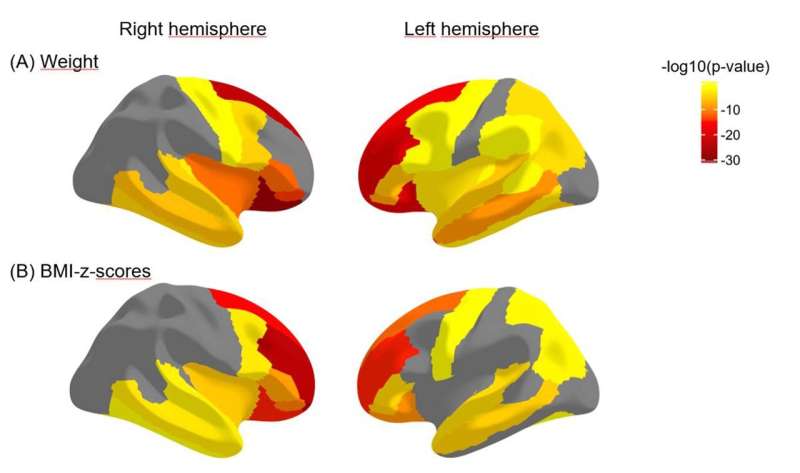 Using MRI data from the largest long-term study of brain development and child health in the United States, researchers have found that higher weight and body mass index (BMI) in pre-adolescence are associated with poor brain health. The findings are being presented today at the annual meeting of the Radiological Society of North America (RSNA).

“We know being obese as an adult is associated with poor brain health,” said researcher Simone Kaltenhauser, a post-graduate research fellow in radiology and biomedical imaging at the Yale School of Medicine in New Haven, Connecticut. “However, previous studies on children have often focused on small, specific study populations or single aspects of brain health.”

Childhood obesity is a growing concern in the U.S. According to the Centers for Disease Control and Prevention, approximately one in every five American children is obese.

Kaltenhauser’s study used imaging data from the Adolescent Brain Cognitive Development (ABCD) study that included 11,878 children aged 9-10 years from 21 centers across the country to represent the sociodemographic diversity in the U.S.

“This dataset is unique in that it closely approximates the U.S. population,” Kaltenhauser said.

After excluding children with eating disorders, neurodevelopmental and psychiatric diseases, and traumatic brain injury, the study group included 5,169 children (51.9% female). According to the children’s BMI z-scores—measures of relative weight adjusted for a child’s age, sex and height—the overweight and obesity rates within the study group were 21% and 17.6%, respectively.

To gain a comprehensive view of brain health within the study group, the team evaluated information from structural MRI and resting-state functional MRI (fMRI), which enables researchers to measure brain activity by detecting changes in blood flow. With resting state fMRI, the connectivity between neural regions—known as resting state networks—can be observed while the brain is at rest. The researchers also evaluated data from diffusion tensor imaging—a technique that helps assess white matter—and restriction spectrum imaging, an advanced diffusion MRI technique.

After correcting for age, sex, race-ethnicity, handedness and socioeconomic status, the research team used linear models to determine associations between weight and BMI z-scores and the imaging metrics. 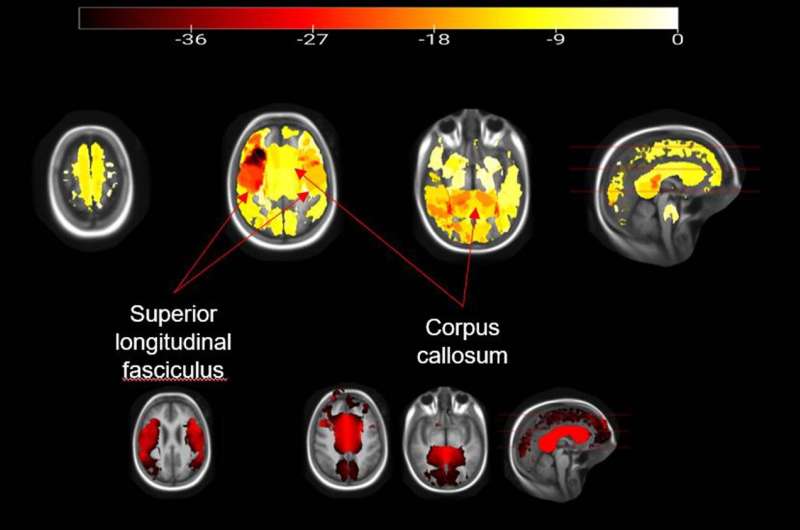 The researchers observed structural brain changes in children with higher weight and BMI z-scores, including significant impairment to the integrity of the white matter. Areas of degradation included the white matter of the corpus callosum, the principal connector between the brain’s two hemispheres, and tracts within the hemispheres that connect the lobes of the brain.

“It is striking that these changes were visible early on during childhood,” Kaltenhauser said.

The researchers also observed a thinning of the outermost layer of the brain, or the cortex, which has been associated with impaired executive function.

“We expected the decrease in cortical thickness among the higher weight and BMI z-score children, as this was found previously in smaller subsamples of the ABCD study,” Kaltenhauser said. “However, we were surprised by the extent of white matter impairment.”

Resting-state fMRI images revealed that increased weight and BMI z-scores were associated with decreased connectivity in the functional networks of the brain that involve cognitive control, motivation and reward-based decision making.

“Increased BMI and weight are not only associated with physical health consequences but also with brain health,” Kaltenhauser said. “Our study showed that higher weight and BMI z-scores in 9- and 10-year-olds were associated with changes in macrostructures, microstructures and functional connectivity that worsened brain health.”

Senior author Sam Payabvash, M.D., a neuroradiologist and assistant professor of radiology and biomedical imaging at the Yale School of Medicine, said the study’s findings provide an important mechanistic explanation of other studies that show higher BMI in children is associated with poor cognitive functioning and school performance.

“The longitudinal ABCD study gives us the opportunity to observe any changes that occur in children with higher weight and BMI z-scores,” Dr. Payabvash said. “We’ll need to watch over the next 6 to 10 years.”