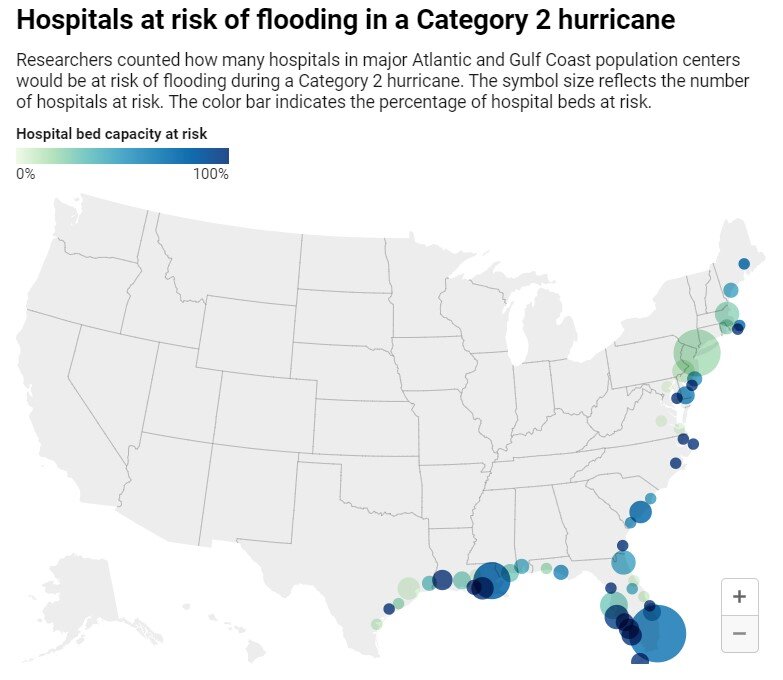 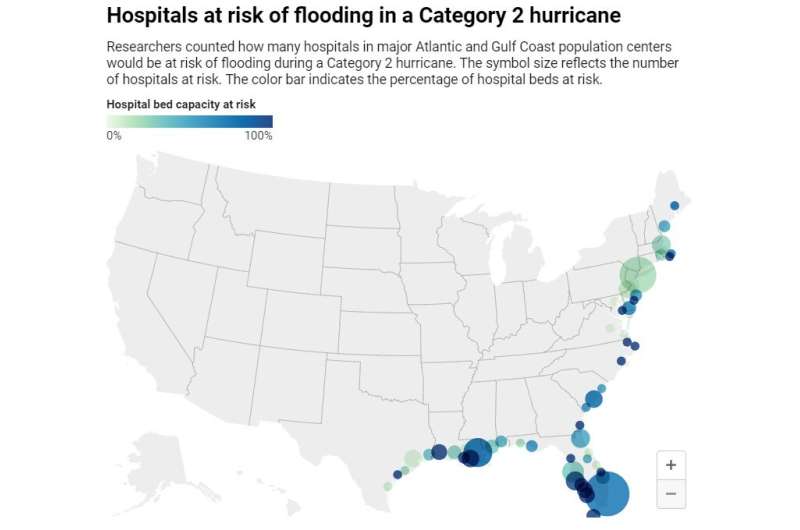 Hurricane Ian, one of the most powerful storms to hit the U.S., tore part of the roof off a hospital in Port Charlotte, Florida, and flooded the building’s lower level emergency room, sending staff scrambling to move patients as water poured in. At least nine hospitals and dozens of nursing homes had to transfer patients after losing access to clean water because of the storm.

Health care services are essential at any time, but when disasters strike, those services become even more crucial as injuries rise.

Yet in many coastal communities, the hospitals were built in locations that are at increasingly high risk of flooding during hurricanes.

I study ways to improve disaster communications, including how health care organizations prepare for severe weather events. Here’s what research shows about the rising risks.

Given the impact of climate change, many areas are susceptible to severe weather events and hazards. Health care facilities, including hospitals, clinics and long-term care facilities, are no exception.

A study released Sept. 29, 2022, as Ian was leaving Florida, found that even weak hurricanes can pose a severe risk to scores of hospitals along the U.S. coasts.

In 25 metropolitan areas along the Atlantic and Gulf coasts, the authors found that at least half of the hospitals are at risk of flooding from a Category 2 storm, defined as wind speeds of 96 mph to 110 mph. In some cities, including Lake Charles, Louisiana; Naples, Florida, and Ocean City, New Jersey, 100% of the hospitals are considered at risk.

Those risks are rising with climate change. The study’s Harvard University authors estimated that the likelihood of coastal hospitals flooding would rise 22% this century.

What’s important about this finding is that communities can begin to identify hospitals at high risk and develop both backup plans and measures to help protect them and their patients.

The U.S. has a history of hospital disasters during severe weather. The aftermath of Hurricane Katrina in 2005 opened many people’s eyes to what disrupted health care systems look like. During that storm, many hospitals were without power and the ability to communicate, and experienced damage to water and sewage services. Several could not replenish supplies of food, medicine, blood and linen, yet had to continue operations under horrific conditions.

The TV drama “Five Days at Memorial” is built around that disaster and how the staff at New Orleans’ Memorial Medical Center struggled to keep patients alive while cut off by floodwater. It has triggered a lot of conversations around preparedness and risk in these critical facilities.

My research explores how underserved and vulnerable populations prepare for and manage disasters. In particular, I’ve done fieldwork analyzing how older adults living in retirement and assisted-living communities perceive their own risks.

Ideally, these facilities should be able to provide the same services during disasters as before, without interruption. The reality is that when infrastructure is overwhelmed, older adults may be trapped in dangerous conditions, unable to evacuate. They also might not be mobile enough to be easily rescued, especially if the facility spans several floors.

After Hurricane Irma knocked out power to Florida in 2017, a dozen patients died in a nursing home that lost power for air conditioning. That led to a state law that now requires nursing homes to have backup generators. But Ian showed that even that isn’t enough to keep residents safe.

Other populations, such as people with physical, sensory or cognitive disabilities, and those who are medically vulnerable, including homeless populations, also need to be considered in health care-related disaster planning. While those who are homeless may find shelters, including shelters created for disaster relief, it is not uncommon for people who are homeless to seek medical services or find refuge in hospitals.

After disasters, hospitals are essential for treating the rise in injuries, as well as mental health issues among disaster victims. More than 700 rescues were launched during Ian and its aftermath.

Therefore, it is important for hospitals, as well as nursing homes, to develop hospital disaster resilience plans. These plans for hospitals cover topics like safety, staffing, surge capacity to handle a sudden increase in patients, handling emergency services amid flooding, and disaster plans, training and communications.

The Southeast Louisiana Veterans Health Care Center in New Orleans is one model of how to design a health facility to withstand a disaster. The building was built to handle high winds, and the emergency department is on the second floor, at least 21 feet above base flood elevation.