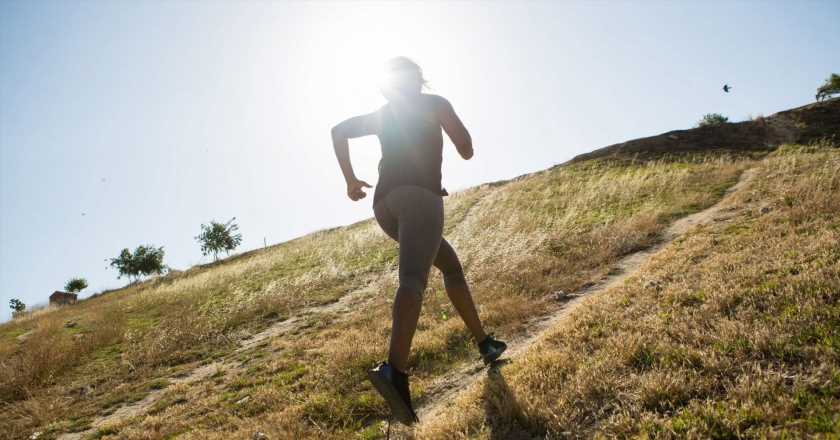 Jogging may be a mood booster but hill sprints – like heavy weights – can be sweaty and painful. When writer Stacey Carter started adding them to her regime, however, she was surprised to discover their incredible capacity for stress-busting. She explains how she managed to conquer stress on her way up to the top.

It’s January, and the temperature is 1°C. In front of me is a steep hill that I’m about to sprint up. The first few strides are fast and I feel good, but when I’m less than a few steps away from the top, just near the crest of the hill, I hit a wall: my breath comes out in gasps and my quads start to ache. My body wants to stop but this is a key moment – because if push through this feeling, things become easier.

Since the start of the pandemic in 2020, I’d been wondering why – even after eight hours of sleep – chugging caffeine was the only way I could feel like a functioning person again. It wasn’t until Christmas when I took two weeks off, stayed away from social media and avoided news feeds, that I realised how mentally exhausted I was. During the in-between period of Christmas and New Year, I was doing what I can only now describe as “regenerating”, watching back-to-back Bridgerton and eating record amounts of peanut butter on toast.

It was around this time that my boyfriend started adding hill sprints to his exercise routine. A PT friend had recommended it to him as a quick-fire way to improve his anaerobic threshold (your personal engine capacity when exercising). He’d come back home after each session, red-faced, but brighter and proud of what he’d achieved. When he suggested I join him, I hesitated. While I love exercise, I prefer the calm of a yoga class or the afterburn of a LISS workout and tend to avoid anything that involves sweating, puffing and gasping. I agreed to give hill sprints a go on the condition that if I didn’t enjoy them, we could stop.

I quickly learnt that any enjoyment you experience during hill sprints ends at around halfway through the first one. Each sprint lasted less than a minute, but those last few seconds were hard. Not only was my heart pounding against my chest, but I felt lightheaded and nauseous. It took every bit of willpower I had to sustain the pace. The urge to walk was sometimes so overwhelming, that I would stop just a few metres from the crest of the hill and be forced to make a deal with my brain to get my legs to move again. I knew that I could rest at the top – and that’s what kept me putting one foot in front of the other. By the end of my first session, my body felt tired, but I was flushed with pride. I wasn’t going to be breaking any records for the fastest uphill sprint anytime soon, but I’d achieved way more than I’d anticipated I would.

“Sprints (with a short/active rest in between, such as 60 seconds slow jogging), hill sprints, longer interval training, and tempo runs are all aerobic forms of exercise that improve your anaerobic threshold,” says Hannah Raynor, a UK Athletics qualified running trainer. “As a coach, I use the sessions mentioned above to help individuals work towards improving their personal best and therefore become faster and fitter.

In an ideal world, you want to be developing a fitness routine that sees you working hard 20% and moving at a lower intensity the other 80% – which is where your strength training should come in

After that first session, I incorporated hill sprints into my weekly routine, normally saving them for a weekend. Speed and endurance gains, while minimal, felt noticeable. Some days I couldn’t stop smiling afterwards and other days, big fat tears ran down my face as I glared at the incline in front of me. As I headed into each week, the flush of confidence I felt after completing a session kept me feeling upbeat. When a new project or an unexpected deadline crept up, I didn’t feel overwhelmed. Rather than head straight for a glass of wine come 5:30pm, I would brace myself for the onslaught of initial panic then chip away at the problem. The fatigue that I’d felt earlier in the year also seemed to be lifting.

“Aerobic forms of exercise such as hill sprints help you learn to relax into the discomfort and overcome the feeling of wanting to stop or slow down,” says Hannah. “Getting through a hard session gives individuals are a greater sense of achievement and confidence going into a race. It’s the ‘if I can do this, I can do anything,’ effect. There is an endorphin release after any run, but I believe the release is bigger after you have achieved more than you thought you could – whether that’s hitting a certain pace, running up a hill or going further.”

We all know that the after-effects of high-intensity exercise are pretty good (endorphin high and all that), but doing workouts that push our anaerobic thresholds higher, such as sprints, hill sprints, longer interval training, and tempo runs, have been proven to have tonnes of mental and physical benefits. “Research shows that high-intensity anaerobic exercise results in improved exercise performance compared with lower-intensity continuous aerobic training,” says Dr Aria Campbell-Danesh, a high-performance psychologist.

“High-intensity anaerobic exercise has been shown to be effective for cardiorespiratory fitness, blood glucose control and hypertension management, and emerging evidence suggests that HIIT training reduces depressive symptoms in women, which we think is linked to increasing levels of serotonin (which is involved in regulating mood, appetite, and sleep), glutamate, and Gamma-Aminobutyric acid (GABA) in the brain.”

Our neurotransmitters are responsible for a whole host of different functions, but GABA and glutamate are thought to help with feelings of anxiety, stress, and fear. It makes sense then, that extended periods of stress can lower the levels of these neurotransmitters. “Sustained and chronic stress can elevate the ‘stress hormone’ cortisol, and reduce levels of serotonin and GABA,” explains Dr Aria.

That being said, you should avoid overworking your body when doing sessions such as hill sprints. Rest and recovery is key. “There is a certain level of addictiveness to pushing your body hard with every workout,” says Hannah. “With this in mind, people need to be careful and mindful of the risks, such as injury prevention and negative impact on fitness burnout resulting in a loss of enjoyment.

“I would programme one high-intensity session in a week, balanced out with low-intensity training/running for the remainder of the week. You ideally want a 20/80 split (20% high intensity and 80% low intensity) to make the biggest fitness gains and to avoid injury.”

And when you’re not running, strength training can massively help your performance on the hills. Incorporating movements such as squats and mountain climbers are a surefire way to strengthen your muscles and protect your joints.

“Squats, push-ups and sit-ups are all brilliant strength exercises if you do regular high-intensity workouts,” says PT Jemma Thomas. “These are hard work in their own right, so doing 10 of these in intervals will warm up and strengthen the muscles well. I’d also recommend resistance training using weights, resistance bands or your own bodyweight. Mountain climbers, where you copy the movement of mountain climbing at home on your mat, strengthens a number of parts of the body – your core, back, arms and legs.

“The plank is also a great strengthening exercise as it focuses on the abdominal and lower back muscles, while also helping the shoulders, arms, legs and core. But if you have weak wrists, do them on your forearm instead!”

Hill sprints are, without question, the hardest I’ve pushed my body physically. But during a year where so many of us have felt mentally stretched, I know that I needed to prove to myself that come challenging times, I could adapt to and deal with those hard moments.

I feel stronger and fitter, but importantly, I feel I’ve gained a level of resilience I didn’t know that I had.

Ready to take your running up a notch? Join our Strength Training for Runners four week plan to run faster, longer and stronger.