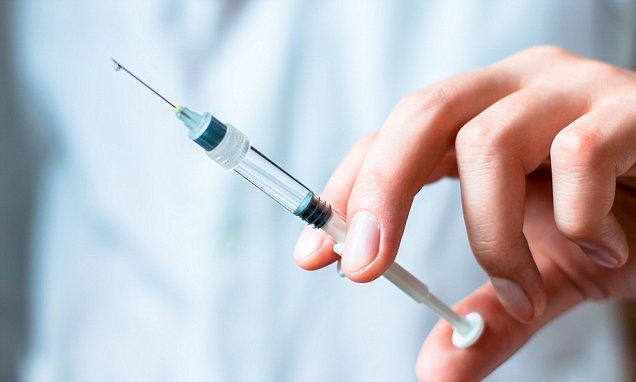 HIV patients may soon be offered a once-a-month jab

Tens of thousands of HIV patients could soon be offered a long-lasting jab to control the killer virus and keep AIDS at bay.

Results from a landmark trial show the monthly injection is as effective as the daily cocktail of pills patients currently take.

Experts claim replacing the daily regimen of three or more antiretroviral (ART) pills with a jab will improve compliance.

The year-long Phase III trial – the final hurdle faced before treatments can be licensed – was carried out by an Irish drug firm and involved HIV patients from 13 countries.

Charities estimate nearly 37 million adults and children across the world have HIV, including at least 100,000 in the UK. 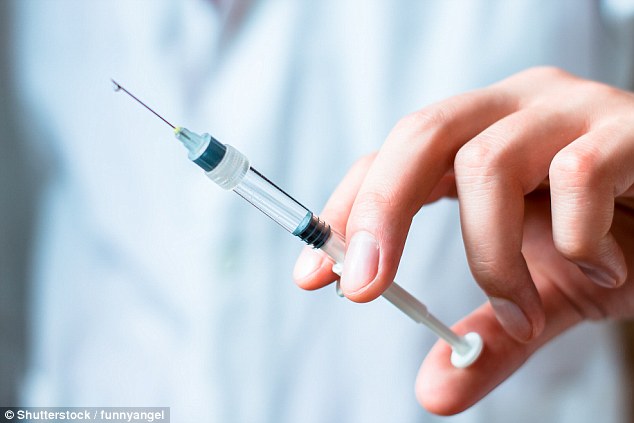 The lethal virus progressively damages the cells in the immune system, weakening the body’s ability to fight infections.

Left untreated, this leads to AIDS – the collective name for a series of deadly infections which the weakened immune system cannot tackle.

The jab – which has to be administered by a nurse or doctors at present – contains two ART drugs, cabotegravir and rilpirivine.

The new ATLAS trial was a Phase III, the final testing hurdle before a new drug or treatment can be licensed for use on humans.

Nearly 620 patients with suppressed HIV from 13 countries were given a three-pill standard treatment, before switching to the monthly jab.

You can get or transmit HIV only through specific activities, most commonly through sexual behaviors and needle or syringe use.

They’re often broken into six groups because they work in different ways.

Doctors recommend taking a combination or ‘cocktail’ of at least two of them.

Called antiretroviral therapy, or ART, it can’t cure HIV, but the medications can extend lifespans and reduce the risk of transmission.

NNRTIs bind to a specific protein so the virus can’t make copies of itself.

These drugs block a protein that infected cells need to put together new copies of the virus.

These drugs help block HIV from getting inside healthy cells in the first place.

This stops HIV before it gets inside a healthy cell, but in a different way than fusion inhibitors. It blocks a specific kind of ‘hook’ on the outside of certain cells so the virus can’t plug in.

These stop HIV from making copies of itself by blocking a key protein that allows the virus to put its DNA into the healthy cell’s DNA.

ViiV Healthcare, the pharmaceutical firm behind the trial, today claimed the injection met its primary goal of long-term viral suppression.

Effectiveness at keeping HIV suppressed was similar between the jab and the three-pill-a-day treatment over a period of 48 weeks.

Dr John Pottage, chief scientific and medical officer at ViiV Healthcare, suggested future versions of the jab could be self-injected.

He said: ‘This novel approach is another step towards potentially reducing the treatment burden for people living with HIV.’

The long-acting injection ‘may offer an alternative’ to daily pills for patients whose HIV is already suppressed, Dr Pottage added.

He said, if the jab was to be approved, HIV treatment would be changed ‘from 365 dosing days per year to just 12’.

Medical advances mean once a patient’s HIV is deemed undetectable, they can even have unprotected sex without fear of passing it on.

ViiV Healthcare, based in Brentford, is owned by drug companies GlaxoSmithKline, Pfizer and Shionogi and specialises in HIV treatment.

It is developing the HIV jab in collaboration with Janssen Sciences Ireland, part of the Johnson & Johnson family of drug and consumer product companies.

UNAIDS last month warned the fight in controlling AIDS was at a ‘precarious point’ and that the AIDS epidemic risks resurging and spiraling out of control.

HIV infections must be limited to 500,000 per year globally by 2020 to achieve the UN goal of ending AIDS as a public health threat by 2030.

But last year’s 1.8 million new infections showed unless something ‘completely drastic’ happened, officials will remain far away from this target, the body said.

This is due to cells in the anus being more susceptible to HIV, as well as fluid in semen and the anus’ lining carrying more HIV than vaginal secretions.

WHAT IS HIV, HOW MANY PEOPLE HAVE IT AND WHAT IS THE PROGNOSIS?

HOW MANY PEOPLE HAVE IT?

HIV is a virus that damages the cells in the immune system and weakens the ability to fight infections and disease.

Without treatment, HIV can turn into AIDS (acquired immune deficiency syndrome), which is a syndrome (or, a set of symptoms) not a virus.

In layman’s terms, AIDS has been referred to as ‘late-stage HIV’. A person has AIDS when their immune system is too weak to fight off infections. AIDS cannot be transmitted from one person to another; HIV can.

WHAT IS THE PROGNOSIS?

Those diagnosed with HIV need to be on medication for life to prevent it turning into AIDS, which is often fatal.

A decade ago, people who were HIV positive were given a shorter life expectancy because the medication, suppressing the immune system, made patients highly vulnerable to fatal infections.

They allow for people who are HIV positive to live as long as anyone else in good health.

They can also suppress the viral load to such an extent that it is undetectable and untransmittable, meaning it’s possible to have intimate relationships without passing it on.