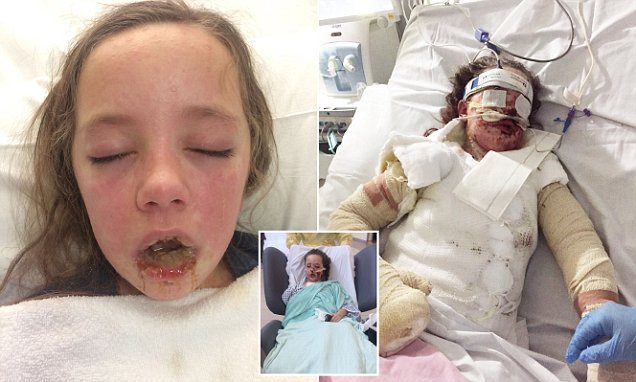 Ten-year-old almost DIES after an allergic reaction to a painkiller: Prescribed pill burnt 65% of a girl’s body, glued her eyes and mouth shut, and wiped out her memory

A girl suffered burns to 65 per cent of her body and lost her memory after developing an allergic reaction to pain medication.

After calming down the pains and twitches in her face, the medication then caused a reaction that led to rashes forming all over the youngster’s body, with doctors believing she was going to die.

From April 2017, Alexa spent six weeks in the hospital and was put in a medically induced coma after SJS caused her eyes and mouth to become glued shut.

The youngster, who has been home for more than a year, is still adapting to being hearing impaired, as well as learning how to swallow food and walk, having recently spent eight weeks in a wheelchair.

Alexa’s mother Kazmira, 36, is speaking out to raise awareness of SJS among doctors to help sufferers be diagnosed quicker. 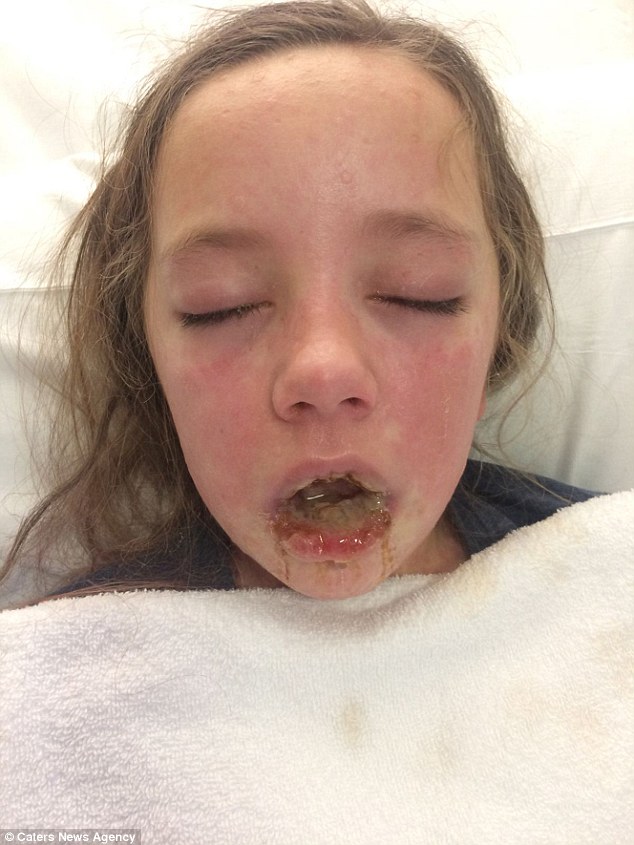 Alexa Juckiewicz-Caspell suffered severely blistered lips and rashes all over her body due to an extreme reaction to a prescribed painkiller. Doctors told her mother she was expected to die 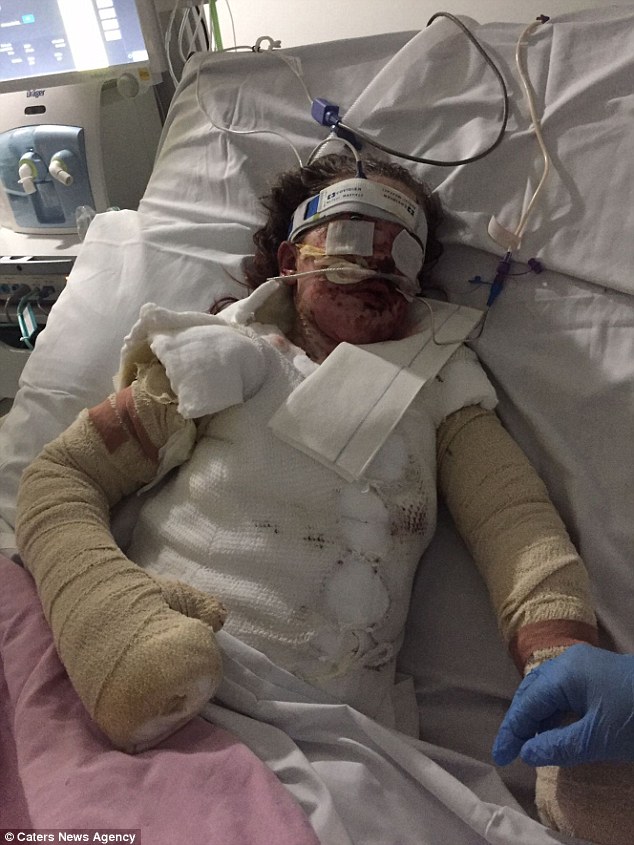 After suffering severe burns to 65 per cent of her body, she was put in an induced coma when her eyes and mouth became glued shut. Alexa later woke with her memory being wiped out 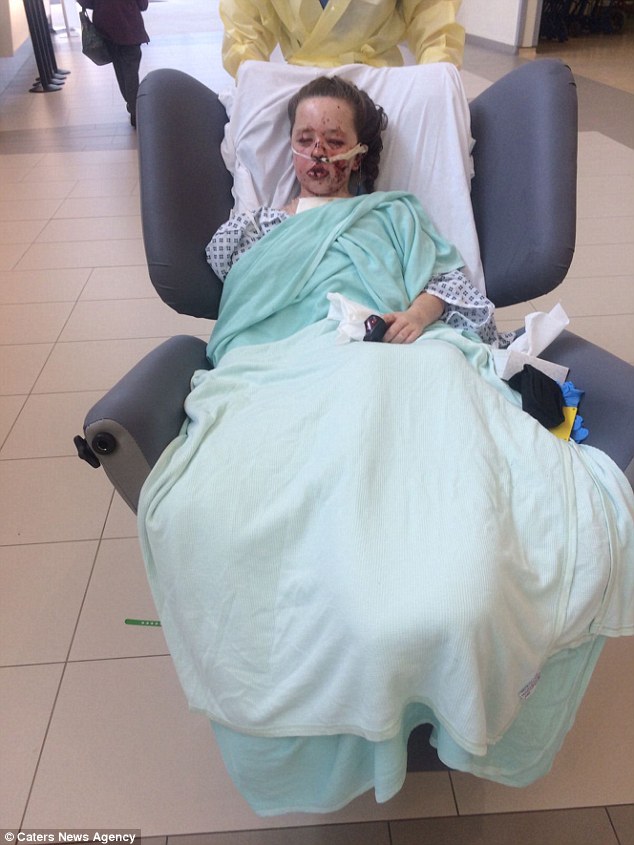 Alexa spent six weeks in hospital, with doctors initially being baffled by her condition

WHAT IS STEVENS-JOHNSON SYNDROME?

Stevens-Johnson Syndrome (SJS) is a rare, serious disorder of the skin and mucous membranes.

It often begins with flu-like symptoms, followed by a painful red-purple rash that spreads and blisters.

SJS affects up to six people per million in the US. Its UK prevalence is unknown.

Other symptoms may include:

The top layer of skin then dies and sheds.

SJS’ cause is often unclear but may be as a side effect of medication or an infection, like pneumonia.

People are more at risk if they have a weakened immune system, or a personal or family history of the disorder.

Treatment can include stopping unnecessary medications, replacing fluids, caring for wounds and taking medication to ease the pain.

Alexa, who was eight at the time of her ordeal, was diagnosed with Trigeminal Neuralgia in early 2017 and prescribed the painkiller.

The medication quickly caused reactions, with the first symptom being blisters on random parts of her body.

Kazmira said: ‘She had extreme burning pain behind her ear, across her face and all the way down her neck. She explained it felt like someone was cutting her face.

‘She started getting rashes on her skin and we had no idea what was wrong.’

Alexa was brought to hospital by her mother when blisters erupted on her lips, with doctors administering an EpiPen that made the reactions worse.

Kazmira said: ‘None of the doctors knew what it was, so I had to email photos to other hospitals in order to get a diagnosis. One of them even thought it was herpes.

‘I get angry at the hospital sometimes, but then I stop myself because I’m lucky that she’s still here.

‘A boy came into the hospital with the same condition right after Alexa and the doctors knew exactly what to do.’ 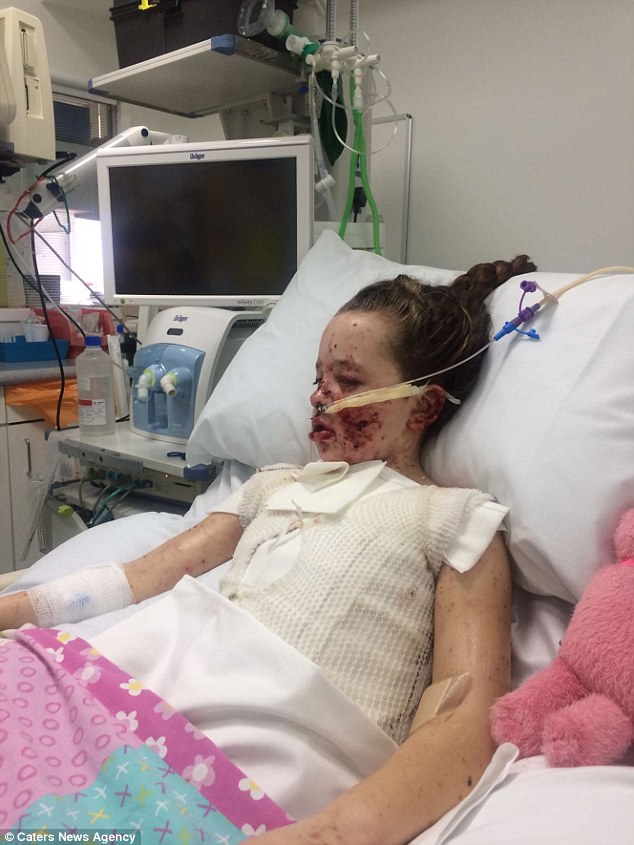 When Alexa first arrived at hospital she was taken to the burns unit. With blisters covering her body, doctors were later forced to shave her head to rub the damaged skin away 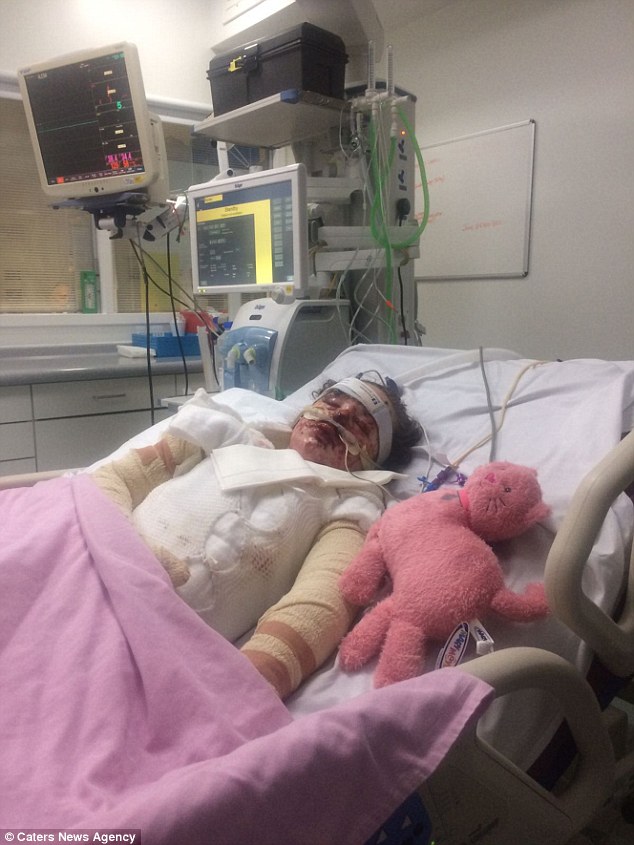 After her eyes became glued shut, it took doctors two weeks to get them open again

Speaking of her daughter’s health battle, Kazmira said: ‘She had to be kept in the burn unit as they scrubbed her body of the burned skin, shaved her head and wrapped her in foil. It took them two weeks to get her eyes open.

‘The doctor told me it was unlikely that she would survive the night. I was terrified.

‘There were blisters and burns on every part of her body you could imagine.’

After pulling through, the youngster forgot how to do basic everyday tasks.

Kazmira said: ‘Alexa learned to breath, walk, talk and eat all over again. She amazed everyone around her with how determined she was, including the doctors.

‘She’s still choking on a lot of her foods and sometimes her mouth even starts erupting in blisters again after a meal.’

Although Alexa is back at school, she is unable to participate in certain activities and has to miss a lot of days to attend medical appointments.

Kazmira hopes her daughter will continue to recover, saying said: ‘The school does everything they can to help her. It’s very difficult for her to do the things she used to.

‘She still gets weak, so it can be difficult for her to write or participate in physical activities with the other kids.

‘We are blessed and we take each day as it comes. It is very hard, but we are strong.’ 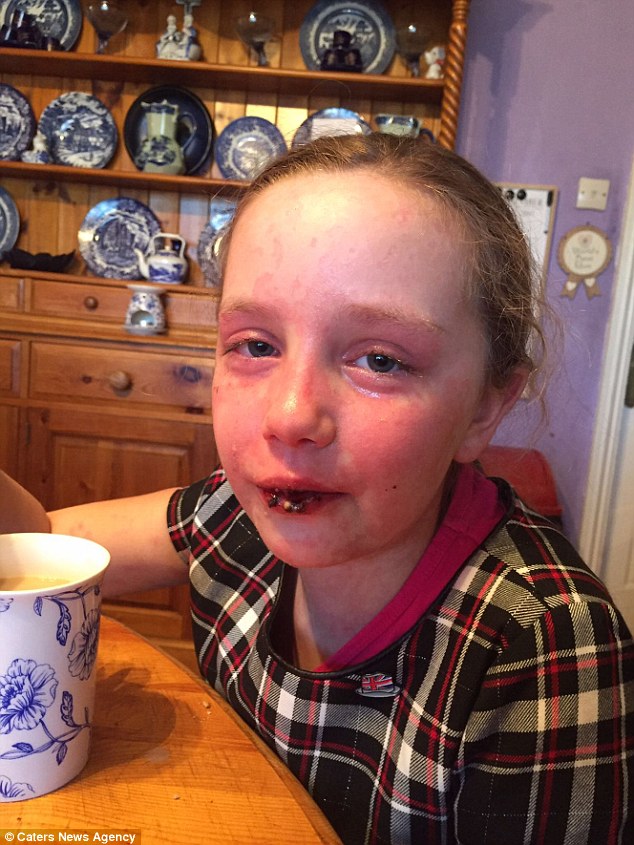 Although now home, Alexa still suffers blistering to her lips after eating meals 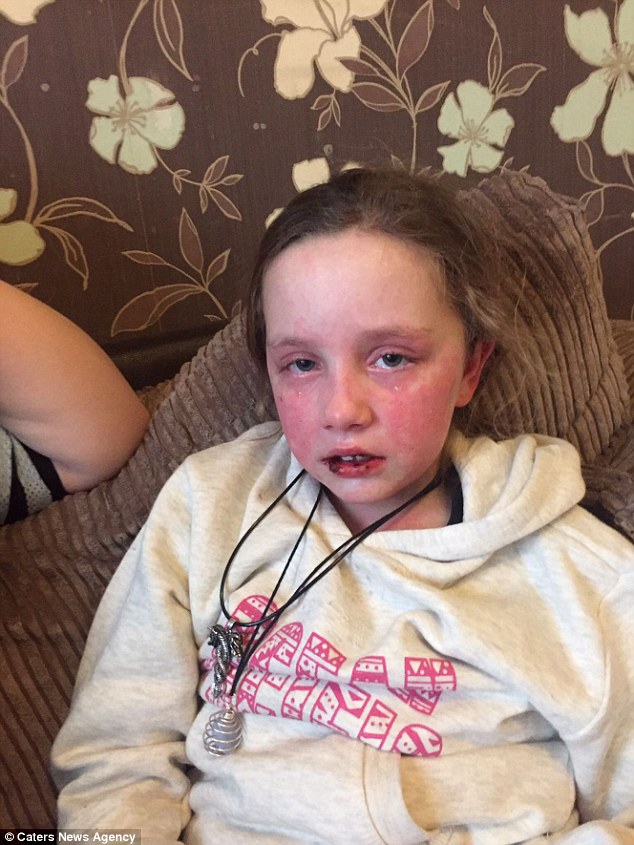 As well as the blisters, the youngster also frequently chokes on her food 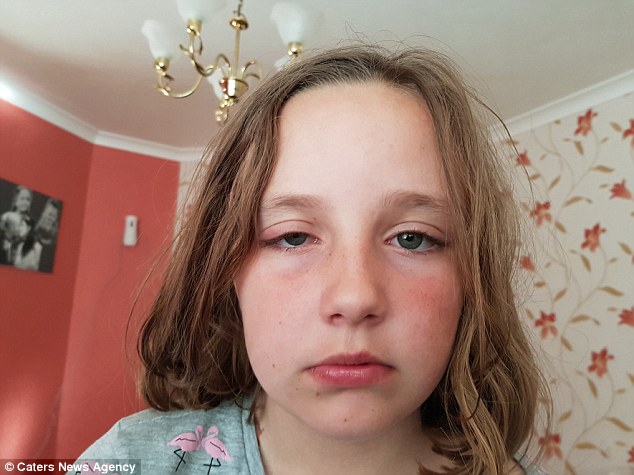 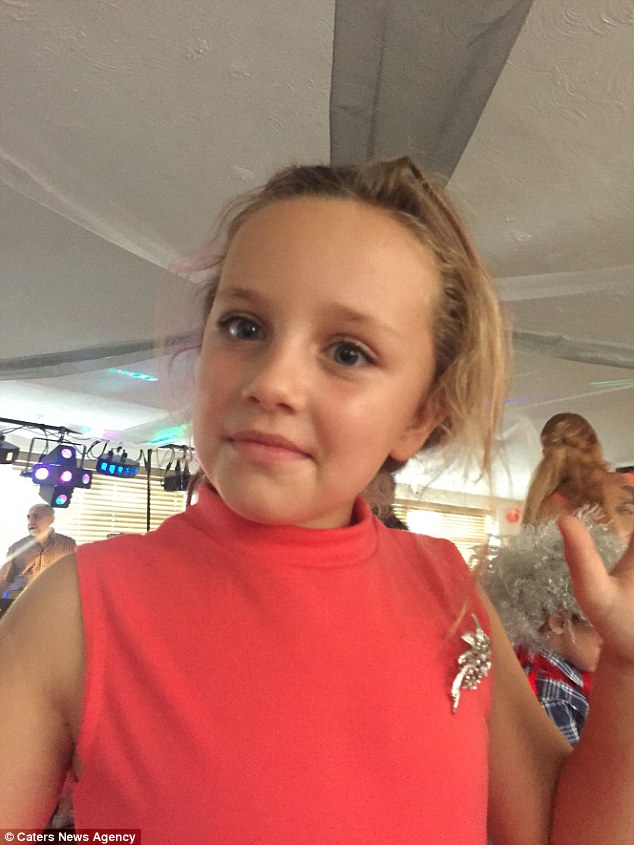 Despite her ordeal, Alexa (pictured after) and her family take each day as it comes 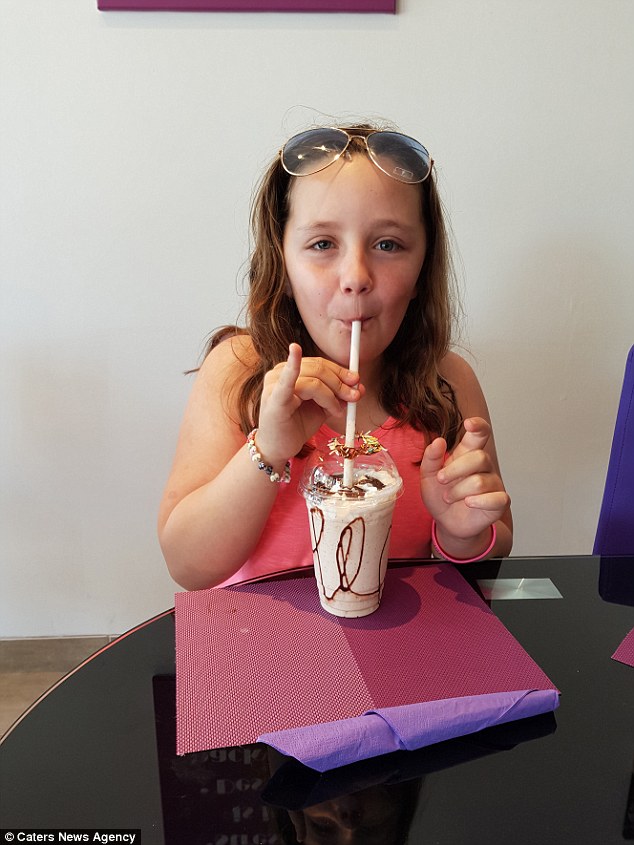