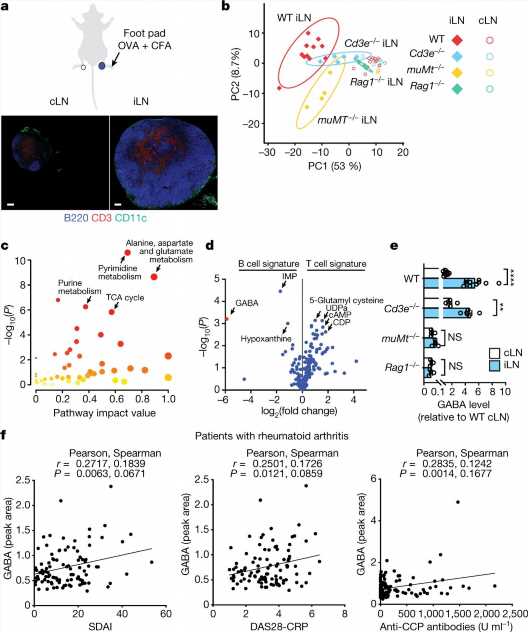 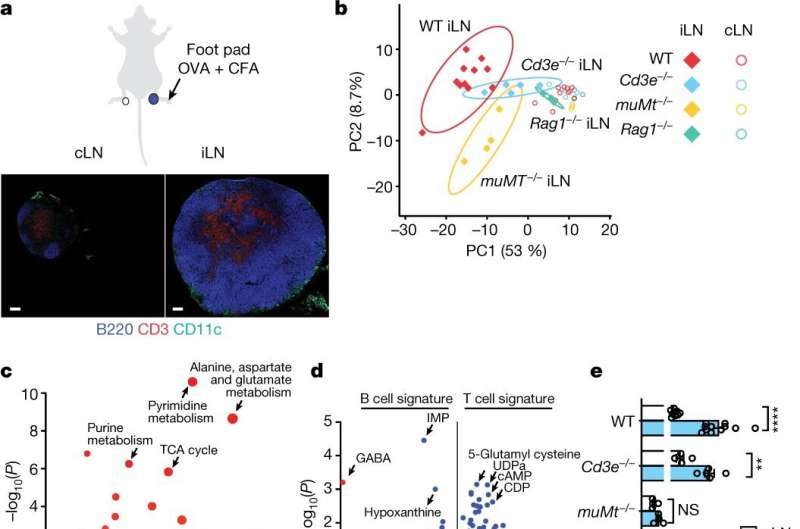 A group of scientists led by researchers from the RIKEN Center for Integrative Medical Sciences have discovered that B-cells, a type of immune cell, secrete the neurotransmitter GABA, and also found that the GABA secreted by the B-cells promoted the emergence of anti-inflammatory macrophages, blunting the body’s cytotoxic T-cell-based response to tumors. According to the authors, this work, published in Nature, could lead to the development of therapies that work to fine tune the immune response.

The research project involved looking at small metabolites in lymph nodes, where immune cells aggregate. First, the researchers stimulated an immune response in mice by injecting them with ovalbumin, and then looked at activated lymph nodes on the same side of the body as the injection, compared to lymph nodes on the other side that had not been activated, to determine the effect of the response on small metabolites. A surprising finding of the initial research was the discovery of a high amount of GABA, a metabolite which is used in the brain as a neurotransmitter that can help calm feelings such as anxiety, stress and fear, in the activated nodes compared to the non-activated ones.

Further work, which involved comparing mice that were deficient in T-cells or B-cells or neither, determined that the GABA was being released by immune B-cells, an unexpected finding.

“Naturally,” says first author Baihao Zhang, a postdoctoral researcher at the RIKEN Center for Integrative Medical Sciences, “we wanted to examine the significance of this release of GABA.” Through further experiments, they found that in B-cell deficient mice that had tumors, implanting a pellet that released GABA led to faster tumor growth, implying that the GABA was having a negative effect on tumor control. Indeed, they found that the GABA led to a decrease in cytotoxic T-cells, which are important players in fighting tumors, and that drugs that block GABA, which are currently used in psychiatric medicine, prevented this. In addition, they found that GABA stimulated the differentiation of monocytes into anti-inflammatory macrophages, which are known to blunt T-cell reaction to tumors. “The implication,” he continues,” is that the GABA caused the increase in anti-inflammatory macrophages, leading to a reduction in the activity of the cytotoxic T-cells.”

According to Zhang, “It was very surprising to find that immune cells regulate each other through such small soluble metabolites produced by themselves.”

According to Sidonia Fagarasan, the leader of the research group, “GABA was known to be produced in plants in response to environmental stress. Also, GABA is produced by bacteria in the gut. We are very happy to have demonstrated that immune cells, particularly B cells secrete the neurotransmitter GABA, highlighting this metabolite’s position at the intersection between neurology, immunology, symbiology and physiology. We found that as in the brain where GABA can inhibit nerve signals, B cell-derived GABA has an immunoregulatory function. In some cases, this inhibition can be harmful. In particular, we showed that GABA made by B-cells limited immune responses to cancer. In other cases, such as autoimmune inflammatory responses or virus-triggered inflammation, GABA’s inhibitory effect could be beneficial.”