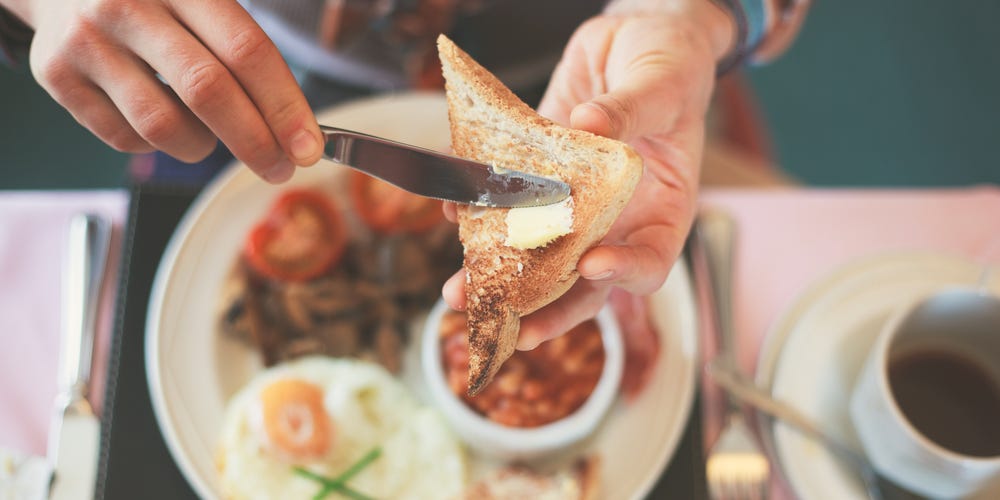 There's new evidence that breakfast may indeed be the most important meal of the day, at least if you're looking to burn calories.

Men who ate a large breakfast, but a small dinner, burned 2.5 times as many calories after eating their meal, compared with when they ate a small breakfast and a large dinner, according to a new, small study, published Wednesday in the Journal of Clinical Endocrinology and Metabolism.

Researchers from the University of Lubeck in Germany looked at 16 healthy young men with a normal body mass index, and studied the number of calories they burned after eating various types of meals, a phenomenon called diet-induced thermogenesis. In the first phase of the study, half the men were fed a large breakfast, but a small dinner, while the other half were fed a small breakfast but a large dinner. Then for phase two, the groups were reversed, after at least two weeks' break between phases to avoid conflicting variables.

They found that participants burned twice as many calories after a large breakfast than after a large dinner, suggesting that the effect of diet-induced thermogenesis is somehow stronger in the morning than in the evening.

The team also found that a low-calorie breakfast increased feelings of hunger and cravings for sweet foods during the day, and opposed to a bigger breakfast.

This type of calorie-burning only accounts for 5% to 15% of the total daily calories we burn, according to Georgie Fear, a registered dietitian and sports nutrition specialist. So, if you typically burn 2,500 calories a day, thermogenesis accounts for 125 to 375 of those calories.

This means that while participants in the study doubled the diet-related calories they burned, that amounts of burning an extra few hundred calories a day at most.

But a few hundred calories a day could still be significant for losing weight.

However, it's not clear from the study if breakfast itself affected total daily calories burned

There's another caveat, though.

While your body might burn more calories after a meal, it could compensate by conserving calories at another point during your day, Dr. Caroline Apovian, Director of the Nutrition and Weight Management Center at Boston Medical Center, told Insider.

"What we do not know is if there was any compensation for increased thermogenesis after breakfast on total energy expenditure and conservation of that energy somewhere else," Apovian said.

For example, if the body thinks you're in starvation, it can go into a state of "hypocaloric feeding" where the resting energy expenditure — i.e. how many calories you're burning — drops.

More research is needed to better understand in practical terms how feasting at breakfast, or foregoing it entirely, affects your metabolism as a whole.

But breakfast still has benefits, according to science

Some research has shown breakfast doesn't make much of a difference in overall weight loss. However, the evidence is mixed, and there's still some reasons to believe breakfast might be beneficial.

"For the easiest time with appetite control, and for maintaining better blood sugar control, shifting food intake earlier in the day is more strongly supported with scientific evidence than skipping breakfast and consuming more calories at night," Fear said.

But ultimately, eating a big breakfast isn't a magic solution to weight loss, either — it still ultimately comes down to burning off more calories total than you eat throughout the day.

In that case, though, you may still want to eat an early morning meal, according to Fear, since there's evidence this can keep you less hungry throughout the day, preventing snacking and causing you to eat less overall.

"Weight loss comes down to calorie deficit, and people who eat breakfast, and a larger proportion of their food during the daytime have been shown to take in less energy over the course of the whole day, which favors weight loss," she said.

Exercising before breakfast could double your ability to burn fat

Intermittent fasting is the best diet for weight loss, but the Mediterranean diet is easier to stick to and healthier overall, study finds