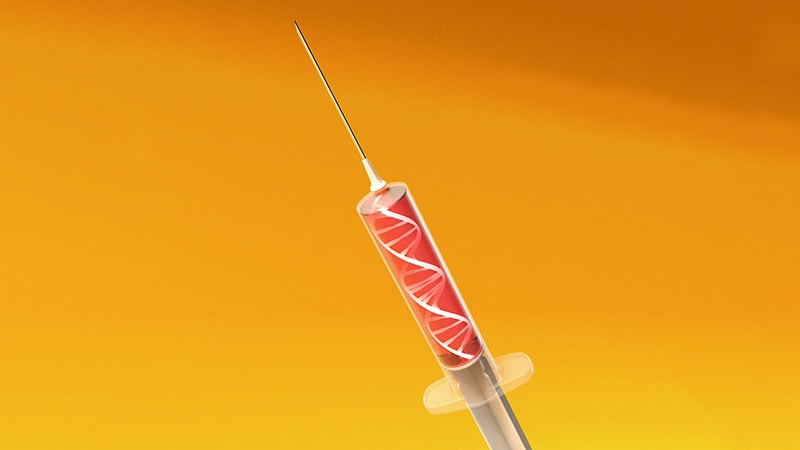 Whether hemophilia A patients should stick with effective nonfactor therapy or join a clinical trial for a potential cure with gene therapy – this question was debated at he annual meeting of the European Hematology Association.

Ultimately, results of a very informal polling of the online audience suggested a strong leaning toward the known benefits of nonfactor therapy, as opposed to as-yet unapproved gene therapy. Although Benjamin Samelson-Jones, MD, PhD, argued for gene therapy, he also saluted the progress made that had enabled such choices.

“Our patients and the field have greatly benefited from this broad spectrum of different therapies and how they’ve been implemented, and it’s a truly exciting time because there will continue to be advancements in both these therapeutic modalities in the next 5-10 years,” said Samelson-Jones, an assistant professor of pediatrics in the division of hematology at the Children’s Hospital of Philadelphia.

Hemophilia A, characterized by a hereditary deficiency in factor VIII disorder, has long involved prophylaxis treatment with procoagulant factor replacement therapy that requires intravenous injection as often as several times a week. This can cause problems with venous access that are particularly burdensome for child patients.

Nonfactor therapy, currently consisting of the approved emicizumab but with more agents in development, provides coagulation without replacement of factor VIII. Importantly, this treatment requires only subcutaneous injection which, after a loading dose period, may be needed weekly or even just once a month.

However, in 2018, at approximately the same time that emicizumab was approved, patients with hemophilia A became eligible to enroll in clinical trials for the far more revolutionary concept of gene therapy, with the chance to become infusion free after just a single infusion.

There are caveats aplenty. Four of the therapies now in phase 3 development are adeno-associated viral vectors that are liver directed, meaning that patients need to be closely followed in the first months post infusion, with regular blood tests and other monitoring.

Notably, once patients receive an infusion, they cannot receive another, because of the buildup of antibodies.

“I think [this is] most important when considering current gene therapy – a patient can only receive it once, based on current technology,” Samelson-Jones said in an interview.”That means if a patient received gene therapy in 2023, and something better is developed in 2025, they are unlikely to be able to receive it.”

“I expect this product to be approved in the next year, though I been previously surprised before about delays in this product’s clinical development,” Samelson-Jones said.

With intravenous injections, “the burden of the stress and anxiety of the injections is underestimated, even when you don’t have venous access problems,” said d’Oiron, a clinician investigator at the University Paris XI.

The heavy toll that these therapeutic challenges have had on patients’ lives and identities has been documented in patient advocacy reports, underscoring that “the availability of subcutaneous therapies through the nonfactor therapies for hemophilia A has really been a game changer,” said d’Oiron, who is also the associate director of the Reference Centre for Hemophilia and Other Congenital Rare Bleeding Disorders, Congenital Platelets Disorders, and von Willebrand Disease at Bicêtre (France) Hospital AP-HP.

She noted that newer therapies in development show the potential to offer longer half-lives, providing “even more improvement with wider intervals between the subcutaneous injections.”

The efficacy of nonfactor therapies also translates to lower rates of joint bleeding, which represent the most common complication in hemophilia, potentially causing acute or chronic pain.

“These therapies allow a life that is much closer to what would be considered a normal life, and especially allowing some physical activities with the prevention of bleeding episodes,” d’Oiron said. “The drugs have a good safety profile and are completely changing the picture of this disease.”

d’Oiron noted that, in the real-world clinical setting, there is no debate over nonfactor versus gene therapy. Most prefer to stick with what is already working well for them.

“In my clinical practice, only a very limited number of patients are really willing and considering the switch to gene therapy,” she said. “They feel that the nonfactor therapy is filling their previous unmet needs quite well, and the impression is that we don’t necessarily need look for something different.”

Echoing that he has had the same favorable experiences with patients on emicizumab as described by d’Oiron, Samelson-Jones, pointed out key caveats that significantly differentiate it from gene therapy, not the least of which is the basic issue of the requirement of injections.

“Even with longer half-lives, approximately monthly injections are still required with nonfactor therapy,” which can – and have – been compromised by any range of societal disruptions, including a pandemic or supply issues.

Furthermore, the mechanism of nonfactor therapies in providing hemostatic regulation outside of normal factor VIII is unregulated, with ‘no easy ‘off’ switch,’ he explained.

“The balance that nonfactor agents provide between pro- and anticoagulant forces is inherently more fragile – more like a knife’s edge, and has resulted in the risk for thrombotic complications in most examples of nonfactor therapies,” he said.

In addition, the therapies have unknown immunogenicity, with an increased risk of the development of antidrug antibodies, called inhibitors, a theoretical complication of nonfactor therapies, if factor VIII is only administered in the setting of bleeds or perioperatively, Samelson-Jones said.

That being said, “nonfactor agents are not for all patients with hemophilia A in the future – but rather gene therapy is,” he noted.

In contrast to nonfactor therapy, just one infusion of gene therapy “ideally offers many years of potentially curative hemostatic protection,” Samuelson-Jones said. “The ultimate goal, I believe, is to achieve normal hemostasis and health equity, and I contend this goal is only really achievable with gene therapy.”

He noted that, while gene therapies will require initial monitoring, “once the gene therapy recipient is 3 or 12 months out, the monitoring really de-escalates, and the patient is free from all drug delivery or needing to be in close contact with their treatment center.”

Regarding concerns about not being able to receive gene therapy more than once, Samuelson-Jones said that work is underway to develop alternative viral vectors and nonviral vectors that may overcome those challenges.

Overall, he underscored that challenges are par for the course in the development of any novel therapeutic approach.

For instance, similar challenges were experienced 10 years ago in the development of gene therapy for hemophilia B. However, with advances, “they’ve now been able to achieve long-term sustained levels in the normal ordinary curative range. And I’m optimistic that similar advances may be able to be achieved for factor VIII gene transfer,” he said.

That being said, nonfactor therapies are going to be essential in treating patients until such advances come to fruition, Samelson-Jones noted.

“I would agree that nonfactor therapies in 2022 have really simplified and improved the convenience of prophylaxis,” he said, “but I would view them as a bridging therapy until gene therapy goes through clinical development and are licensed for all patients with hemophilia.”

While d’Oiron agreed with that possibility, she countered that, when it comes to crossing over to gene therapy, some very long bridges might be needed.

“I would love to have a therapy that would be both extremely safe and effective and offering a cure and normalization of hemostasis,” she said. “But I’m afraid that the current available gene therapy that might be arriving soon still does no fulfill all of these criteria. I think there are a lot of questions so far.”

Ultimately, Samelson-Jones conceded that the success of emicizumab has set a high bar in the minds of clinicians and patients alike, which will strongly influence perceptions of any alternative approaches –and of participation in clinical trials.

“I think that, unequivocally, emicizumab has changed the risk-benefit discussion about enrolling in clinical trials, and in gene therapy in particular,” he said. “And I think it also has set the threshold for efficacy – and if a gene therapy product in development can’t achieve bleeding control that is similar to that provided with emicizumab, then that is not a product that is going to be able to continue in clinical development.”

Importantly, both debaters underscored the need for ongoing efforts to make the novel – and therefore costly therapies accessible to all, through organizations including the World Federation of Hemophilia Humanitarian Aid Program.

“It would be my hope that we can then extend all of these great therapies to the majority of undertreated patients with hemophilia around the world,” Samelson-Jones said. “I think that’s an issue that must be addressed with all of these novel therapies.”

Commenting on these issues, Riitta Lassila, MD, professor of coagulation medicine at the Comprehensive Cancer Center at Helsinki University Hospital, , who moderated the debate, said it has also been her experience that some patients express reluctance to enter the gene therapy trials

“There are two groups of patients, just as in the healthy population as well,” she said in an interview. “Some more ready to take risks and some are very hesitant [regarding] anything new. We do have the saying: If something is not broken, don’t fix it.”

She noted the additional concern that while the therapy has been successful in hemophilia B, factor VIII involves a larger construct and may have limitations with hemophilia A.

Furthermore, “the sustainability of factor VIII production may decrease in a couple of years, and the treatment duration could remain suboptimal,” Lassila said. “However, hemostasis seems to still [be achieved] with gene therapy, so maybe there will be more efficient solutions in the future.”

Samuelson-Jones has been a consultant for Pfizer, Bayer, Genentech, Frontera, and Cabaletta and serves on the scientific advisory board of GeneVentiv. d’Oiron has reported relationships with Baxalta/Shire, Bayer, Biomarin, CSL Behring, LFB, NovoNordisk, Octapharma, Pfizer, Roche, and Sobi. Lassila has been an adviser for Roche (emicizumab) and Biomarin and CSL for gene therapy.

This article originally appeared on MDedge.com, part of the Medscape Professional Network.