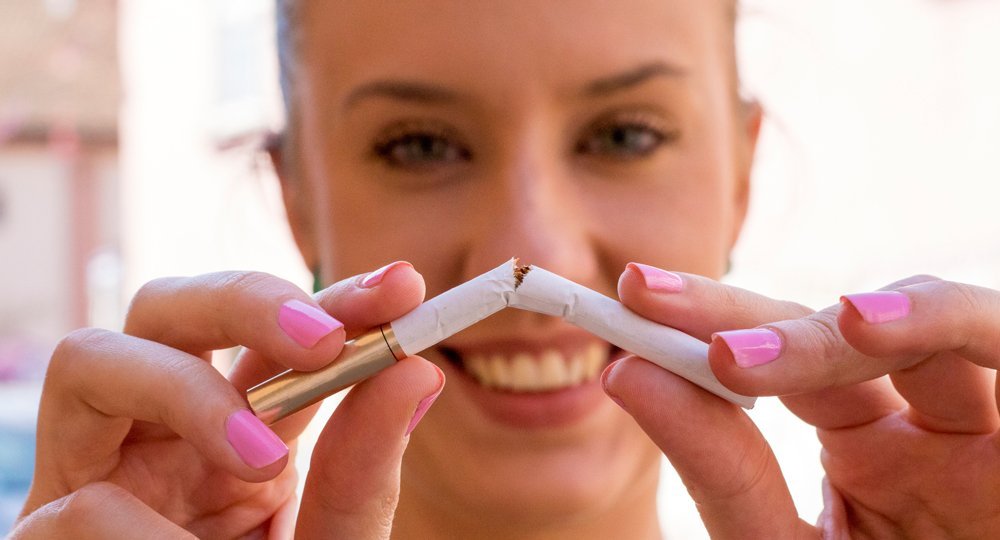 You don’t smoke. You live a generally healthy life. So you’re in the clear, right?

Not so fast! It seems like every day, a new study comes out finding that habit X is “as bad for you as smoking,” whether it’s sitting all day or eating too much fat. So is there any legitimacy to those claims? We checked out a bunch of those studies to find out what the researchers mean when they claim that those things are as bad for you as cigarettes, and in most cases, they’re not lying.

The following five unhealthy habits either expose you to the same contaminants in cigarette smoke or lead to cancer rates equivalent to those caused by smoking. Fortunately, these are easy to fix with a few modifications to your daily routine so you (and your heart and your lungs) can rest easy.

#1: Sitting all day.
Even if you exercise regularly, habitually sitting for prolonged periods, whether at a desk or in a car, is being increasingly linked to a variety of health problems. According to Alberta Health Services-Cancer Care in Canada, inactivity is linked to nearly 160,000 cases of breast, colon, prostate, and lung cancer every year, about two-thirds as many cancer cases as are caused by smoking.

Make it right: Make it a habit to take breaks on-the-move at work, and even make (or buy) a standing workstation so you’re less apt to sit all day. At home, resist the temptation to veg out in front of the TV. Go for a short walk around the block to relax, spend a few minutes cleaning, or schedule a gym date with your significant other.

#2: Eating too much meat and cheese.
Animal proteins are rich in IGF-1, a hormone that can promote the growth of cancer cells. And a study from the University of Southern California published in the journal Cell Metabolism recently found that people on high-animal-protein diets during middle age were four times more likely to die of cancer than people on low-protein diets—a mortality risk factor comparable to smoking.

Make it right: Replace some of your animal proteins with vegetarian protein sources. The same study found that diets high in plant-based proteins like beans, which have protein levels equivalent to some meats, didn’t trigger the same increase in cancer rates. In general, middle-aged adults should be eating 0.8 grams of protein for every 2 pounds of body weight daily. Interestingly, the study found that once you pass the age of 65, eating lots of animal protein isn’t as harmful because your body’s production of IGF-1 begins to slow down.

#3: Cooking with natural gas.
If you’re home is equipped with a gas stove, you’re getting an added dose of carbon monoxide, nitrogen dioxide, and formaldehyde every time you cook a meal. Those same three contaminants are common in secondhand cigarette smoke, and a December 2013 study in Environmental Health Perspectives found that all three contaminants in homes with gas stoves regularly exceeded public health guidelines.

Make it right: Use your vent hood when you use your gas oven or cooktop. Ventilating a gas range can reduce pollutant levels by 60 to 90 percent, even if the fan seems wimpy. Also, cook on your back burners: Most vent hoods aren’t properly centered over a cooktop; using the back burners will help your vent hood capture the most pollution.

#4: Cooking with the wrong oil.
Even if you rely on an electric stove at your house, you aren’t immune to cooking’s polluting effects. Studies on restaurant and residential kitchens have shown that high-heat cooking with shortening and soybean oil (usually just called “vegetable oil” in the U.S.) releases particulate matter, aldehydes, and polycyclic aromatic hydrocarbons, all compounds found in cigarette smoke and linked to airway inflammation.

Make it right: Pick the type of cooking oil best suited your use. For instance, olive oil isn’t good for frying or high-heat cooking, but is fine for cooking at low temperatures or in salad dressings. Avocado oil, on the other hand, is great for high-heat cooking. Look for the “smoke point” on oils that you buy to make sure the oil matches your needs. And don’t forget to run the ventilation hood!

#5: Not getting enough sleep.
This will make you really cranky: Chronic sleep deprivation triggers high blood pressure, heart attacks, strokes, obesity, and a host of other health problems. One study even found that not getting at least six or seven hours of sleep led to mortality rates on par with those seen in cigarette smokers. Even getting poor-quality or fragmented sleep—when you don’t necessarily fully wake up, but the cycle from light to deep sleep gets interrupted—can speed the growth of tumors.

RELATED: Not Getting Enough Sleep Has Some Serious Health Risks That Don’t Just Affect You

Make it right: Don’t assume that being tired is normal. If you feel like you aren’t getting enough sleep regularly, talk to a health professional to see if you might be suffering from a condition such as sleep apnea that is interfering with your sleep.